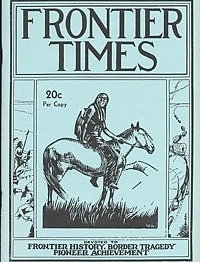 Liberty Dawned When The Alamo Fell

The final revolt that gave Texas her freedom began in the spring of 1835, and was brought about by the arbitrary attempt on the part of the Mexican government to submerge the province of Texas into that of Coahuila, thereby giving the Texas settlers small share or say in the governing of the state. When Texas openly stated her resentment of this method, orders were sent for the disarmament of Texas colonists.

Santa Anna, dictator-president of Mexico, had ambitions to become a second Napoleon and he thought he might as well start with Texas. He sent his brother-in-law, General Cos, up to clean out all the rebellious cities, especially San Antonio. General Cos marched into Texas and entrenched at San Artonio, feeling smug. He had never met up with the peculiar brand of daring known as Texan until Ben Milam and a handful of fervid patriots stormed his garrison. So grilling was the warfare and so determined the attack, that the General raised a flag of truce, surrendered ignominonsly, and scuttled back to Mexico with his tail between his legs. Mexico's would-be Napoleon was furious. He himself would take to the field and show the Texans what it meant to defy Santa Anna! So began the events that led up to day of infamy at the Alamo – the event that like no other, fueled the Texans with patriotic zeal for their final severence with Mexico. This is the story.

Long before the spreading population, farm land cultivation, and the lumber mills had forayed into South Texas with disasterous results to the natural woods of the section, a certain spot about 200 miles southeast of San Antonio was covered with a very fine grove of black walnut trees.

To the early settlers, fine lumber meant little. Untrained in the appreciation and use of good woods, they usually used the first lumber to come to hand, with the result that the black walnut grove stood untouched until the middle of the 1800’s.

In 1852, when San Antonio was a sleepy little village of 500 inhabitants, Mr. Paul Maureaux Sr., an expert cabinet-maker, arrived here by ox-cart. The trip from Indianola, Texas, then, quite a town, had required two months of slow tortuous travel.

Maureaux erected his first cabinet making shop on West Commerce street near Navarro street. This story details the rise and advancemnt of the Maureaux co. of San Antonio.

Account of John Durkee, of Parker county, who ranched in the southeastern part of Parker county, one-half mile from the Tarrant line, and about four miles from the Johnson line, on the Clear Fork of the Trinity. He was at one time a factor in the pioneer days of the commonwealth. In the spring of 1858, Oliver Loving, who was then living at Loving's Valley in Palo Pinto county, and John Durkee, of Parker, conceived the idea of driving cattle to a Northern market and selling them east of the Mississippi River. In the early summer of 1858, these two men started the first herd that crossed the Red River in a trek to the markets east of the Mississippi River. This and other notable events marked the life of this notable Texas pioneer. This is his story.

Account of Walter Prescott Webb, of the University of Texas, whose book, "The Texas Rangers," is the best written history of the greatest body of fighting men ever assembled in America.

Mentions: the town of Caldwell, the "seat of justice" of Burleson County * Bastrop * Mr. Dewees * a sort of tavern kept by a man by the name of William Pettis, or Buck Pettis as he was always called at San Felipe * an old man by the name of Mcfarlane * Judge Lynch * etc, etc.

The First Cattle Ranch In Texas

Account of James Taylor White, originator and owner of White's Ranch-Texas in Chambers County. History places White’s Ranch as the first cattle ranch in the State of Texas. The date of its settlement was 1819-far back in the Texas picture. That was long before any of that group of the pioneers of pioneers had brought their handfuls of stock across the Sabine and the Neches rivers. It was a well established institution, probably with several hundred head of longhorns, at the time of the Battle of San Jacinto, in which it played at least a minor part. This is the story.

Account of the Big Thicket-the most interesting yet the most unknown part of Texas. It comprises an area as large as one of our Eastern States and follows the course of the Trinity River from the blacklands into the Gulf of Mexico. Along its banks have lived, during the 1800’s, some of the most interesting, as well as some of the most undesirable of Texas’ population. Yet, much intersting history is to be gleaned from its hidden reaches – this is the story.

The Drawing Of The Beans by Texans

Undoubtedly one of the saddest events in great history of the state of Texas is that which is described in this account of the Mier expedition patriots who drew their own fate while captive in a Mexican prison.

The Massacre At Goliad

Among the saddest of events in Texas history (along with the above account of the drawing of the beans) is the greusome, insane and heartless butchery of Fannin and his men under Santa Anna’s forces at Goliad. This event puffed up the Mexican madman/butcher and made him infamous in the eyes of all Texas. This is the bloody account.

The following account of an attack by Comanche Indians in San Saba County, 1868, is given as an interview by William J. Miller, one of the two survivors, just one year, almost to a day, before he passed on, while visiting his brother at Cheyenne, Okla. This eye-witness acount of the bloody events is gripping and horrific. The brutality of the Comanche Indians as depicted in this account is almost beyond belief.