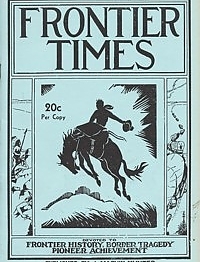 The Battle Of San Jacinto

This account of the battle that ended Texas’ great struggle for independence portrays the background to that battle in the spirit of patriotism that arose from the ashes of the Alamo.

The Story Of Old Fort Anahuac

This is the story of the fort that was erected by the Mexican government who intended that it serve the double purpose of serving for a Custom House, and as a protection from the Indians. In the early days of the settlement this section of Anahuac was one of the few ports of entry along the Gulf Coast. The old fortress was built on a high bluff overlooking Trinity Bay and commanding the channel leading to the mouth of the Trinity river about three miles above. At present constant dredging is necessary to keep the channel open for navigation but it is said that in those days silt from the river had not begun to fill the channel and boats of considerable size could pass up the channel and the Trinity river as far as Liberty, smaller boats plied the Trinity as far as Dallas and Fort Worth. Considerable shipping was carried on over this water route, being one of the most important in this section of the state at that time.

What did Sam Bass do with his stolen gold? Did the famous train robber bury in Texas his share of the $60,000 in twenty-dollar gold coins taken from the Union Pacific Express in 1877? This story offers suggestions.

Further Mentions: Squire Milliner's place near the mouth of Salt Creek * the Union Pacific Express * Wayne Gard of Dallas * A Denton saloonkeeper * loot was reported buried in Montague county northwest of Denton * cave near McNeil, a few miles south of Round Rock * Henry Chapman, who lived near Springtown, in Parker county * Harrison's gin, at the pool on Clear Fork * Skeen's Peak * , N. B. Hamilton, a Round Rock liveryman * B. H. Allen and George Townsley * the old Leander and Liberty Hill road, two miles northwest of Round Rock * Cove Hollow * Marcus Plowman * the Oak Cliff and of the Houston Street viaduct *

By Joseph B. Thoburn, Historian of Oklahoma.

Jesse Chisholm was born in East Tennessee in 1805. His father was a white man, and like many of the Appalachian highlanders, was of Scottish extraction. The family surname would seem to indicate the possibility of Scandanavian blood in his ancestry. The mother was a Cherokee Indian woman. In the years of his early youth his parents migrated across the Mississippi and settled in a Cherokee colony which had located in West Central Arkansas. In 1829, these Western Cherokee people moved again, settling in the new Cherokee country in the Indian Territory west of the then Territory of Arkansas. Young Chisholm moved to the new reservation with his fellow tribesmen, being then about twenty-four years old. In 1831, he was said to have been employed as a guide by a party of white men who wanted to go to the vicinity of the site of the present city of Wichita, Kansas, in quest of some buried treasure, the existence of which he did not guarantee. As a young man, he was married to a Cherokee woman, one or two children being born to the union, which did not prove to be congenial, a separation ultimately taking place. He was a wanderer and became well acquainted with the Southwestern frontier, between the Arkansas and Red rivers. He also developed considerable ability as a trader with the Indians of the untamed tribes of the plains, which made his services in demand as a guide and interpreter for various Government expeditions. He lived a fruitful and eventful life. This is his story.

Was Creed Taylor At San Jacinto?

Creed Taylor, a pioneer Texan, wrote a lengthy account of the services he rendered in the army of Texas in 1835 and 1836. The services Mr. Taylor claimed to have rendered are not substantiated in many instances by the official records in the General Land Office, and in the archives of the State preserved by the Texas State Library in the capitol. Nevertheless, he claimed to have fought at San Jacinto. This story gives details.

The Lackey Tragedy In Blanco County

August 24, 1885, witnessed the most dire tragedy of the history of Blanco county, when on the morning of that day Al Lackey maddened or demented slew six of his immediate family or relatives, on the Perdenales River and Hickory Creek, in the north end of the county. Saddling his horse and taking his Winchester rifle he started out to exterminate, seemingly, the entire Lackey connection. Going up the valley he shot his niece who was sitting near the front door of her little home, rocking and singing to her little baby, and when the body was found lying on the floor the baby was asleep against the body covered with its mother's blood. His brother ran in endeavoring to escape but tripped and fell, and as he begged for his life Lackey stuck the gun behind his ear and pulled the trigger. Mr. and Mrs. Stokes, an aged couple fell before the fire of his rifle, and then his own daughter and another relative were slain, and then to Lackey's chagrin he found he had no cartridges. He rode back to his own home where he tried to kill his wife and small baby with a knife; but she managed to escape from the house and ran to a nearby thicket where he chased her for some time, finally giving up the chase and she saw him slash his own throat. He seemed to back out after one deep gash had been cut: went to his horse and getting into the saddle headed in the direction of Johnson City. On the road he met a neighbor, Al Bundick, and asked him to ride to a spring with him. Bundick noticed that Lackey had a handkerchief to his throat but…This is a dreadful account of that tragedy.

Running With The Mavericks

This is the story of the "underground" church of pioneer Texas.

Texas was built up by plain people, committed to the soil, living along crooked streams and in quiet coves by the sides of straggling mountains. These calico and jeans people came from the states in lumbering wagons and settled in the midst of a virgin country filled with game and swarming with Indians.

They had a purpose and won their way per force of the truest valor, intending to the last to keep their pledge to their foster mother. There was a slight but permissable defect, however, with reference to their religious pledge, for in the beginning it was understood that the whole of Mexico was Catholic. That, in order to preserrve a homogeneous nationality, the Mexican republic exacted membership in the faith on the part of all immigrants; despite which, nearly everyone of those who broke away from their ancient fastnesses were staunch Protestants, hating the Catholic. For the purpose of slipping through the nose, they appeared before a bushwhacking priest, took the vows, contacted with a sprinkle of psuedo holy water, and repaired more strongly confirmed in the Baptist faith than ever before.

Quickly they began the erection of churches, drawing members from far and near. Where the "one-gallus" preachers came from, heaven knows, and how they got by is something to tell, unless they recanted for the moment their faith like their brethren did and winked their way by a fake priest. The vital facts are that, like the yellow-breasted lark that chirped out on a limb in the peach orchard after the first killing frost, they were there, breaking the bread of life to hungry communicants…

This is the story of Belle Starr, one of the most daring female desperadoes in history. This woman possessed a feminine appeal that rivaled that of Cleopatra, and a power of leadership comparable to the genius of Napoleon, she was one of the most agreeable, yet craftiest, persons of her sex. Her deeds of outlawry seemed to be more for the pleasure of excitement and chase than for the desire to take human life and, according to old timers who knew her personally, she never killed a man. This is her story.

This is a very excellent account of Adolph Huffmeyer, cattleman of Frio county, TX , whose experiences date back to 1870 when he was a youngster of 15 years acquiring the art of twirling a rope and tying down and branding mavericks on the prairies of Frio county. He spent much of his life in the saddle rounding up cattle and made a number of trips over the old trail to Dodge City, Kansas City and Platte River, Neb., driving herds of Texas cattle through to the markets. He lived through the wild and wooly days when savage Indians infested southwest Texas and made heavy raids on cattle, and often exchanged shots with the redskins in a running fight, during which he had some narrow escapes.

He slept on the open prairies in all kinds of weather with a couple of blankets and a blue army overcoat as his bedding, and during severe rainstorms, before the yellow oiled slickers were made, he sat up all night wet to the skin and the rain pouring down and no protection whatever. Still, with all these hardships he never became seriously ill, which he attributed to the plain simple food he had, consisting of cornbread, beef and black coffee the year around, something for expert dieticians to ponder. "While the cornbread was baking, with tallow for shortening, the beef would be broiling on a stick," he said, "and I can assure you it tasted mighty good, since we killed nothing but the choicest heifer yearlings." There is some rich history of the area in this account.

Mystery Of The Angel Of Goliad Unsolved

Account of the "Angel of Goliad", the beloved Mexican woman who saved the lives of twenty-five American soldiers that fatal Palm Sunday. A beautiful, kind hearted woman had come into Goliad with the Mexican soldiers. Some called her Madam Alverez, Alavez, Alvesco and Panchita. But whatever her real name was the Angel of Mercy graced her more perfectly. Evidently from the records Capt. Telesforo Alavez picked Panchita up on the road as he traveled with General Urrea. Whatever her legal status was she had influence enough with Colonel Garey, the Mexican officer, to save the lives of many Texas "rebels" when she learned that the prisoners were to be shot. This is her story.

"Home On The Range" Controversy Settled

Frontier Times for April 1935 carried a story called "Trailing a Ballad" which dealt with the history of "Home on the Range" and stated that the writer of this famous western song was unknown.

It is now a pleasure to report that the mystery surrounding the song's origin has been solved, thanks to the efforts of a New York attorney, Samuel Moanfeldt, who specializes in straightening out the legal tangles of music publishers. Mr. Moanfeldt represented the group of music houses which published "Home on the Range" and were sued for copyright infringement by William and Mary Goodwin of Tempe, Arizona. In 1904 the Goodwins had published "An Arizona Home," in its essentials much the same as "Home on the Range." When the latter became a popular song and a real money maker in the music trade, they sued in the United States District Court in New York City, asking half a million dollars damages…

INCLUDED ARE THE REAL AND ORIGINAL LYRICS FOR THIS GREAT OLD SONG B. M. ROBERTS, MY HUSBAND

Brief account of Benjamin McCulloch Roberts, the eldest son of Mr. and Mrs. Jerry Roberts, who was born in 1847, near Lockhart, Caldwell county, Texas.