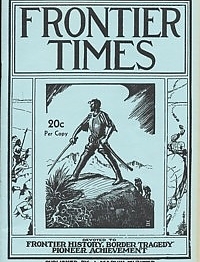 Account of event that occurred in February, 1873 when the author was a boy just past sixteen years of age, living with his mother and sisters in the town of Bandera, fifty miles northwest of San Antonio, Texas, on the Medina river, and the writer was employed by the firm of Schmidtke & Hay, merchants. According to the author, those green hills and valleys, now so beautiful and peaceful to look upon, "seemed always alive with skulking, prowling, hostile Comanche Indians."

Ten miles west of Bandera, on the north bank of the Medina river, lay the beautiful Mono valley, where lived a number of substantial citizens, including the Oborskis, Bauerleins, Joe Sutherland, John Preston, old Uncle Meacham (Dad) Curtis, and several others. The now flourishing little village of Medina City had not yet been thought of.

Just north of the east end of the valley, in a low range of hills lived Travis Moore, otherwise known as "Tap" Moore, and with him lived his mother. Not far away from the Moore cabin, perhaps a half mile distant, lived John Walker, Mrs. Moore's son-in-law. A dim trail led from the Walker cabin to the Moore cabin. About half way between the two cabins ran a narrow skirt of rather dense scrubby timber and underbrush. The trail running from one place to the other ran directly through and across this skirt of timber.

Early one morning "Tap" Moore who was an unmarried man, mounted his horse and rode away to be gone from home all day, leaving the old mother at home. After he had been gone for some time, his mother decided she would walk over to the cabin of Mr. Walker and spend the day with her daughter. She went on foot, taking her knitting with her. She took the trail leading from her place to Walker's and followed it to the point where it reached and crossed the aforementioned timber, and she had passed through this skirt of brush when she was suddenly attacked by a band of ten or twelve Indians…

A Story Of Old Fort Parker

THE FOLLOWING biographical sketch was furnished the Groesbeck Argus in 1875 by Mr. Abram Anglin, who was born in Kentucky, December 28, 1817. His father moved to Illinois when he was one year old, and came to Texas in 1833. They settled on the frontier, now Limestone county, many miles from any white habitation. The little colony with which they came consisted of about eight families. In 1835, he enlisted in the service as a Texas Ranger. As the Indians and Mexicans were, at this time, becoming troublesome, they built Fort Parker, near the present site of Groesbeck. These families were the advance guard of civilization. Fort Houston, in Anderson county, was the nearest protection, except their own trusty rifles. This is his eye-witness account of the Fort and it’s surroundings at that early period including the desperate Indian raid of 1836.

By T. U. Taylor, Austin, Texas. (Includes a number of great old photos pertaining to the account)

Account detailing the treks of John Simpson Chisum from his ranch near old Bolivar in the northwest corner of Denton county to his first ranch on the Rio Pecos at Bosque Grande and to old Lincoln on the Bonito. For ten years he was cattle king of the counties of Denton, Cook, Wise, Tarrant, and other adjacent counties. The biggest town near him was Bolivar, and the result was that John Chisum had to conduct a principality at his own home. Everywhere you find a track of John Chisum, one thing is clear: his strong human sympathy, and his love of his fellow man. This is his story.

By Frederick Law Olmsted (Continued from Last Month) More about New Braunfels and the German settlements in that area.

Recollection Of An Indian Raid

Mrs. Schweppe tells of a desperate Indian raid that occurred around 1870 near her father’s ranch some 25 miles W of San Antonio.

Further Mentions: our home was on King William Street, San Antonio * Leon Springs, where Mr. Aue had a general merchandise store * our farm, which my mother named "Wassenberg," after a country estate of her family in Germany, * Simon's place * brothers, Hermann and George, * Captain Smith, who lived three or four miles distant * Captain Tining * the Gallagher ranch * Captain Charles Schriener of Kerrville *

When Texas Won Her Independence

One hundred years ago the eyes of the world were turned toward Texas, then struggling to throw off the yoke of Mexican oppression. This was accomplished when the short but decisive battle of San Jacinto was fought on April 21, 1836. In those days news traveled slowly, for we did not have the telegraph, telephone, radio or airmail to carry messages to the waiting world, and it was sometimes weeks before a bit of news could filter through the usual channels. The following items appeared in the New York Sun of Wednesday morning, May 18, 1836:

Triumphant news from Texas!-Santa Anna Captured!-In the New Orleans True American, and the N. O. Bulletin of May 3rd, we have received the highly important, and apparently well authenticated intelligence of the entire defeat of Santa Anna on the 21st of April, by the forces under Gen. Houston and of the capture of himself and principal officers. It was received at New Orleans on the evening of the 2nd instant by the steamboat Levant from Nacogdoches. We see no reason to doubt the reality of these iniportant events, and cannot but admit that they will in all probability decide the independence of Texas, and have great effect upon the whole Mexican Republic. It is scarcely probable that greater mercy will be shewn to Santa Anna by the Texians than he has shewg to them, and perhaps, long ere this, he has been sacrificed to their retributive vengeance. Whatever we may think of the Texian cause as a question of right, its present success, and, as we are now inclined to think, its ultimate triumph, will entitle it to that consideration and respect which every successful revolution invariably secures. Etc. etc.

Most preachers of our day are sentimental little wimps who preach a wimpy little "gospel" that couldn’t save a flea. Not so with ‘ol "Wildcat Morrell," the famous "cane-brake" preacher from Tennessee, who planted the first seeds of Baptist doctrine in Central Texas by preaching the first religious sermon to be heard in this part of the country in the 1830’s. Z. N. Morrell heard that soul stirring appeal that was hurled from the various pulpits of the States and decided to hit the trail for Texas. "Who Among You Will Go To Texas?" The province of Texas was considered a real mission field, and it was. The map was put before Morrell and his companions and the "Falls of the Brazos" was pointed out as a good location for a colony to be established, so they mounted their horses and rode away. Colonists were so anxious to hear a sermon in this new country where there were few settlers and no churches at all that the denomination made no difference, and all expounders of the gospel were treated with the greatest of respect. And why not? These pioneer preachers could fix a broken wagon wheel, shoot Indians, plow a field and talk politics as well as uplift morals. It was generally understood that a Texas minister had real zeal, faith and courage or he would not be in this wild part of the country where it took a fighter to live. The fiery zeal that moved him to undertake almost anything and the courage that never failed him at any time made him a dreaded antagonist, and he was known among his enemies as "Wildcat" Morrell. This is a great story about a truly great man. It details certain Indian raids battles that he was involved in.

[SELLERS NOTE: THIS IS EXCELLENT AND VERY RARE HAMILTON COUNTY HISTORY AND GENEALOGY!]

This is an exceelent historical account of the family of Captain Rufus Stinnett, who moved to Hamilton county in 1870, from Milam county and settled in the region.

Frio County Has A Colorful History

By Mrs. W. A. Roberts (includes photo of Mrs. Roberts)

Account of early days of Frio County by Mrs. W. A. Roberts, who was postmaster at Frio Town for forty years. Account also includes sketch of Mrs. Roberts, written by Edward Blackaller, which appeared in an old issue of the Pearsall Leader.

Account of final Indian raid in Erath county (known for having so many of the bloodiest raids), which occurred near the southeast corner of Erath county. At the beginning of the fight, there were very few white men taking part, but as runners were sent to the different settlements, the number of the whites were increased almost hourly. To evade their pursuers, the Indians traveled along the east line of the county northward. The white men stayed so close to them and kept coming from every direction, so that the Indians were compelled to change their course and were trying to get out of Erath county. A few miles south of the northeast corner of Erath county, they were surrounded by the settlers, and were forced to take shelter in the bed of Star Hollow Creek. This hollow is at, or very near, the east line of Erath county on the Morgan Mill and Granbury road. The Indians took refuge under a high bluff which gave them an advantage over the whites, as there was only one approach and that was to walk out directly in front and in open view of the Indians. The settlers charged, but retreated with three seriously wounded. The day was exceedingly hot, and a thunder storm gathered, which broke in a regular cloud burst. The number of settlers had increased to about one hundred or more by the time the dashing downpour of rain came. In a short time...

Mrs. S. A. Roach of Oakville, Texas, offers old time poems published many years ago, and also a letter dated April 10, 1862, written by her father Ben J. Estes, to his sister, Sarah Elizabeth Estes Hart. Mr. Estes was born April 30, 1841, either in Red River or Kaufman county, Texas, and died June 17, 1927, and was buried at Dodsonville, Texas. He entered the Confederate army and went through the war, being wounded several times.

Dear Brother and Sister: I received your kind favor of March the 7th and have been unable to answer it until now as I was just starting on a scout when I received it and have just returned. I was glad to hear from you and that you was well but happy to know that the bad reports that you had heard from the wars were false. It is true that Southern arms have underwent some reverses but not so bad as you had heard. General Sihbley has achieved a great victory in New Mexico. There is a man here trying to raise a company that was in the fight. Colonel Baylor passed here last week …