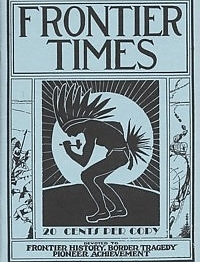 Account of the ill-fated Texas seaport town of Indianola, destroyed by the devastating storms of 1875 and 1886. Indianola was established between 1841 and 1844, and was made the county seat when Calhoun county was organized in 1846. Many of the buildings and a large number of underground cisterns were made of concrete blocks which the settlers themselves manufactured of lime and crushed oyster shells. Other business buildings and substantial residences were of frame construction. The devastation was total, and the towns quickly became uninhabited ghost-towns.

Mentions: the once-prosperous store of Lichtenstein and Alexander * Mr. Lichtenstein, a partner of the firm, moved to Corpus Christi where he founded the M. Lichtenstein Department Store * C. E. Fisher and Mrs. Owen Smith, Sr., both of Port Lavaca * Chevalier La Salle * Highland Cemetery * Morgan Line steamers * Many tales of heroism are recounted by old timers, and it is said that no heroic deeds surpassed those of William Taylor and Joe Blackburn, both first degree murder prisoners. These men had been taken to the court house, and during the height of the storm both…

Some Recollections Of Mexico City

Account deals with construction of railroad systems to and around Mexico City and details such tasks as well as life in the city in the late 1870’s.

Mentions: The Mexican National was a three-foot guage, designed to run from the City north by way of Toluca, Acambaro, San Miguel, San Luis Potosi, Saltillo, and Monterrey to Nuevo Laredo. The Mexican Central was a standard guage line (4 feet, 81/2 inches) designed to run from Mexico City to Ciudad Juarez, just across the Rio Grande from El Paso, Texas. * James A. Sullivan, an Irishman * Oaxaca * Benito Juarez and Porfirio Diaz * revolution against Lerado de Tejada in 1877 * a line from Vera Cruz on the Gulf of Mexico to Manzanillo on the Pacific * The concession for the Mexican Central, the standard-guage line from Mexico City to Juarez, was granted to a man named Simonds, who transferred his concession to interests headed by Atchison, Topeka & Santa Fe, then under the influence and management of Thomas Nickerson of Boston * The Sullivan narrow-guage lines * the Mexico City Juarez line, then known as the Mexican Central * San Juan del Rio * Buena Vista, * the Vera Cruz Mexican Railway * Calla de San Cosine * Calle de San Francisco and the Puente de Alvarado, and by San Cosme, leading to the main road to Chapultepec, now known as Calle de la Reforma * The few American and English people then living in the City of Mexico lived in two English boarding houses, first that of an English lady, a Mrs. Hawthorn, just south of the station at Buena Vista, and another English lady, a Mrs. Potts, with two fine daughters, who kept a boarding house on the Puente de Alvarado, about four blocks west of the Alemeda, and several blocks up toward the National Palace, from, the Legation residences of the Britisa, American and Spanish minisers * Marshall Bazine * Church of "El Noche 'Trieste," or San Hipolito * San Hipolito * General Ord, * the Standard Oil Company's subsidiary, the Waters Pierce * General Trevino * San Cosme street * Prince Albert coat * Mrs. Hawthorne's boarding house * John Gadsden * American Minister Gadsden

Account of Blanco county resident Lod Calohan, who was generally conceded to know more about his particular line of business than any other man that ever lived. His line of business was cattle brands. As ace brand inspector for the great Texas Cattle Raiser's Association, Calohan knew on sight more than 15,000 cattle brands. But cow critters weren't the only ones that Lod Calohan knew by the thousands. It was often said in Texas that Lod knew more Texans, and more Texans knew of him, than any other man. He had that particular faculty of seeming to be the personal friend of everyone whom he met or had ever met. Really, he was their personal friend. Though he spent the last forty years of his life in work that kept him out of the state-mostly at Kansas City, he never forgot the boys with whom he grew up in Blanco nor the "boys" whom he knew on the trail in later years. This is his story.

Old Towash On The Brazos

"The first breech-loading rifle of any consequence was the one patented by Captain John H. Hall of the United States Army on May 21, 1811. Official records show that in January 1817, 100 of these arms were ordered by the Government. They were issued to a company of riflemen for experiment and were subsequently reported on favorably. The breech of Hall's weapon consisted of a block pivoted at the rear which carried the flash pan and hammer and into which the cartridge was pushed from the front. The block was then depressed and caught by a spring catch. Close to 40,000 of these rifles and carbines had been turned out for the Government at the Harper's Ferry arsenal, but, with Captain Hall's death in 1841, the weapons ceased to be manufactured.

Following close upon the Hall patent came the famous Needle gun, officially adopted by the Prussian army in 1841 and used in the Franco-Prussian war (1870-7D.This gun is said to have been an improvement of a breech-loader developed by Pauly, one of Napoleon's officers in 1812, under whom, Johan von Dreyse, the inventor of the needle gun, is said to have worked…"

Further Mentions: Sharp's breech-loader * the French Chassepot * Antoine A. Chassepot * had a calibre of .433 * the Lebel rifle * the Springfield, calibre .58 * Burnside's breechloading * Marsh's breechloading * Spencer's breech-loading * Jacob Snider * the muzzle-loading Enfield * Colonel Boxer of the Royal Artillery * The first breech-loading Springfield rifle was a model of 1866. This was a calibre .50 * E. S. Allin, master armorer * the Allin alternation * Spencer * the Remington rifle * the old Mauser of 1871 * the Lebel magazine rifle * the Mannlicher .433 rifle * the calibre .30 Krag-Jorgensen * the Brag * The Krag-Jorgensen rifle * the efficient Mauser * black powder Springfields * the present United States Magazine Rifle, Model 1903, which replaced the Krag *

Transformation Of The Llano Estacado

As settlers came to Texas in frontier days, they did not have the advantages of transportation facilities and ready means of communications of this day and time. They entered a new country, many of them with nothing but their fire arms. By the law of gravitation they settled the more desirable and easily accessible places first.

So it happened that the enormous plateau country known as the Llano Estacado, or Great Plains of Northwest Texas, were the last to be settled and was the last stand of the Indians in Texas. This is the story.

History Of The Mormon Colony

IN 1874 a group of 200 Mormons, composed of 40 families, head ed by Elder Lyman Wight, came to Gillespie county, and settled on the Pedernales river about four miles south of Fredericksburg. The colony, very prosperous, remained in the county until 1853. At that time they left, apparently for Utah and other states. This is the story of their times in Gillespie County.

And on the tablet in the "Big-Foot" Wallace Room the following names appear:

A Journey Through Texas in 1856

Mentions: Mr. G. W. Kendall * Seguin * Lavaca * the Cibolo * a town called Boerne * the Dresden gallery * the valley of the Guadalupe * Sisterdale is a settlemnet of eight or ten farms, about forty miles from San Antonio * Humboldt * Goethe's Bettina *

Facts Regarding The Escape Of Billy The Kid

Many versions have been written about how the Kid killed his guards, how he secured the

pistol that sent a bullet through Guard Bell's heart, as to where Bell died, whether at the foot of the stairs in the Lincoln county court house, or in the corral back of the courthouse, whether the guards were killed during the noon hour, or as to whether they were killed late in the afternoon, as to what route Billy took on leaving Lincoln for his final farewell. This account contributes data that will throw some light on many doubtful incidents, and recites the different stories as to how Billy escaped, and also quotes a dispatch sent out of New Mexico, as well as stories told by Billy and his friends.

On Baron's Creek, four miles south of Fredericksburg, Gillespie county, the United States Government located a fort in 1848. The fort was established as a precautionary measure against Indian attacks and depredations. It continued in use until 1853. At that time the buildings were abandoned and the troops moved further west. This is the account of the development and history of that fort.

Col. F. M. McCaleb, writing the "Early Days in Southwest Texas" feature in the San Antonio Express, quotes from files of an early San Antonio paper in this story.

W. E. Loyd, Medina, Texas was a participant of the bloody engagement that occurred in Llano county, August 5, 1873. He writes from first-hand perspective to clarify certain critical details.