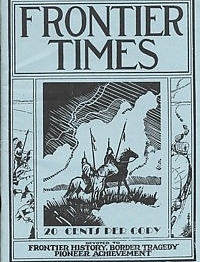 Account of Dr. Hill, a man ripe in honors and scientific achievement and an orphan of the Civil War at five, young Hill turned toward Texas at 15 and stopped at Comanche, "the last town of the frontier and the roughest and toughest of that age." While there, he found time to study the geology and topography of the region, which was "different from any other then recognized in America" but couldn't find an explanation for the rock formation of the region. This study, however, led to the identification of the link in the geologic column which he named the "Comanche Series." This is his story.

Santa Anna's Opinion Of Himself

Account of the "Butcher of Goliad" and his self-inflated ego.

Col. M. L. Crimmins, relates the facts regarding a misstatement which appears in an elaborate article entitled "The World's Biggest Ranch," in the Fortune magazine, December, 1933, on page 92: "Captain Richard King, who in 1851 rode out from Brownsville with his good friend, Col. Robert E. Lee, U.S.A., and picked out the first few thousand acres of his ranch."

Masonry A Factor In Texas Civilization

Account traces out influence of Masons in early settlement and history of Texas, going back to 16th century Masons in Mexico.

Mentions: Masonry in Texas was naturally a development of York Rite Masonry in the United States * Masonry existed in Mexico in the latter part of the sixteenth century * Lie Verdad, one of the first martyrs of the idea of Mexican Independence * the Masonic Lodge of the Calle del Cuervo * Father Miguel de Hidalgo * Masonic Lodge of "Arquitectural Moral" of Calle de los Ratos No. 4 of Mexico City * Nicolas Bravo, Vicente Guerrero, Juan Alvarez; Ignacio Comonfort, General Gudalupe Victoria, and many others, prominent in Mexican affairs, were members of Masonic fraternity * Moses Austin * Stephen F. Austin and Musquez, political chief of Bexar * Masonic Lodge at San Antonio de Bexar * The first Masonic meeting in Texas was held in a laurel grove in the… * the Grand Lodge of Louisiana * Holland Lodge No. 36, U. D., was organized December… * John Austin Cemetery near Brazoria * Holland No. 36 * General Urrea * Col. J. W. Fannin * Anson Jones * the Battle of San Jacinto * Col. Wm. B. Travis, * Bonham and Crockett * Grand Lodge of Texas *

The Bedias Trail In Angelina County

The trail derived its name from the Bedias Indians, whose usual habitat was along the lower Trinity river, a likely starting point for the known history of the territory now embraced within the limits of Angelina county. This trail led from the lower Trinity river to the Spanish missions and settlements in the vicinity of Nacogdoches, and traversed Angelina county in a northeasterly direction, seemingly following the general course of the line of the H. E. & W. T. Railway, according to the map in Prof. H. E. Bolton's "Texas in the Middle Eighteenth Century."

During the days of Indian raids in the west and southwest, Atascosa county did not escape, and has her bloody chapter in the frontier history of Texas. The county was created from Bexar in 1856, and named for Atascosa Creek. The Navarros, Salinas, and others established stock ranches inside the present limits of the county at an early date, but were broken up during the Texas revolution and the Navarros moved further east and established ranches near the present town of Seguin, in Guadalupe county.

In 1853 permanent settlements began to be made, and by the time the county was organized quite a number of settlers were located, among whom were Justo Rodriguez, Judge J. S. Fern, Calvin Horton, the Askins, Yarbers, Tumlinsons, Brights, Slaughters, "Scotch" Jim Brown, Franks, Spears, James Lowe, Charles Hood, Old Man Ferry and Dan Arnold. This is their story and of others who were important in the early settlement of the county.

Excerpts from an almost complete file of the Runnels County Record, published 1882-1886 at Runnels City, Texas. In about 1887 the Santa Fe railroad was built through that county, missing Runnels City about four miles, with the result that Runnels City faded off the map.

The town of Seguin was so named to commemorate the record of Don Erasmo Seguin, of whom the historian Thrall said, "He was a high-toned gentleman of truly honorable and patriotic sentiments." In 1831 a colonist, located his league and labor of land, upon a portion of which the City of Seguin is located, moved onto it in 1832 and built the first house on the banks of Walnut Branch (the former name of the City of Seguin) in 1833. And so begins this account of the earliest days of Seguin and the man whose name the town bears.

It took men and women of strong will and hardy build to willingly forsake a civilized country and venture into unknown wilderness with no other aim than to enjoy freedom and the hope for a better future.. Such a man was Ernst Hermann Altgelt, son of a German official privy counsellor in Duesseldorf. His father, a man highly honored in his community, had been army chaplain and tutor of the two sons of the reigning prince of Prussia for several years. He sailed from Bremen to Texas via New Orleans on a small sailboat in the year 1852, settling on Cypress Creek, (then part of Bexar county – Kerr and Kendall county were settled in 1856 and 1862). The town of Comfort was soon to be born. This is the story.

The First Texas Capital Was In Louisiana

In the parish of Natchitoches, just 15 miles from Natchitoches, just a mile or so from Robeline, is the spot where for 52 years 13 governors ruled the vast Province of Texas for the King of Spain. There, from 1721, to 1773, was the civil and military capital of Texas, in the royal Presidio de Nuestra Senora del Pilar de Los Adaes, only Spanish mission in Louisiana. This is the story of what was essentially, Texas’ first capital there.

"A most daring robbery was committed at the residence of Wm. Johnson, three miles south of Liberty Hill by two masked men about 9 o'clock one night last week. The robbers covered Mr. Johnson and party …Mr. Young, a relative of Mr. Johnson, was present, and the robbers were … * A tragedy was enacted at Hondo City, Medina county, which shocks all who hear it. W. D. Ward, formerly editor of the Castroville Quill, and at present traveling agent of the San Autonio Daily Express, and Robert U. Fly, son of Rev. B. F. Fly of Gonzales county, entered a, saloon to et a glass of beer. Ward had been drinking to execs and was crazed from the effects. After the drink they had a short controversy, when Ward… * etc, etc.

G. K. Crabb, Sr., was born December 3rd, 1845, in the Republic of Texas, on a plantation five miles north of Huntsville, Walker county, Texas, at what is known as Crabb's Prairie. He was one of ten children born to Judge H. M. Crabb and Mrs. Rose Crabb. Mr. Crabb remained at Crabb's Prairie until his father, Judge H. M. Crabb was sent to the Legislature in Austin, Texas, at which time the family moved to Madisonville, Texas. While Judge Crabb was attending the Legislature in Austin, Mrs. Rose Crabb, his wife and the mother of G. H. Crabb, took ill and died. G. K. Crabb was the youngest of the ten children and is the only one of the children that survived. Here is his story.

By T. U. Taylor, Dean of Engineering, University of Texas

JESSE CHISHOLM was born in the State of Tennessee in 1806. His father was a Scotchman and his mother was a Cherokee Indian. They lived in the Cherokee section of Tennessee, and when the trek or emigration occurred, they went to the west and for a few years lived in the western part of Arkansas, but later settled in Indian Territory (Oklahoma) in 1829. For thirty-nine years Jesse Chisholm was a factor in the civilization in the Indian territory. He was a pioneer with the traits of Daniel Boone. Here is his story. Account contains excellent old photos of Mr. And Mrs. Chisholm. Account also contains graph comparing MILESTONES IN LIVES OF JESSE CHISHOLM AND JOHN CHISUM.