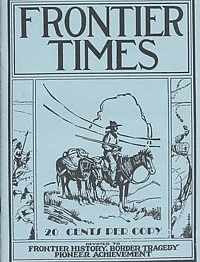 The Story Of A Young Emigrant's Suffering

Account of a settler, a Scotchman, "McLeod" and his Irish wife Nora, who saved a few hundred pounds, and came to try their fortune in Texas. The McLeods, like many other settlers, had rashly followed their own ideas, and neglected to ask the advice of experienced dwellers in the country. The consequences of their imprudence soon made themselves apparent; and in a short time, McLeod was stretched upon his bed in a slow and lingering fever… difficulties mounted in their new home along with unspeakable terror. This is the story.

"At this moment a sound full of horror struck upon the mother's ear. There was a sudden shriek, and then the fearful shouting of fifty savage voices burst loudly, and suddenly forth, startling the echoes for miles around. And well did Nora recognize the cry she heard. It was the voice of her who had been playing in unconscious glee. Quicker than thought, she sprang to the door, and gazed distractedly on the scene before her. Her darling was in the hands of the Indians, of Indians, too, whose aspect was totally unknown to her. In a moment she guessed the truth, and that the dreaded Comanches were upon them. In vain she struggled to free him; in vain did the child hold up his little hands, and implore help from her, who never yet had been deaf to his prayers. Amidst the stunning sounds of the terrible warwhoop, the petted child was held up before his mother's eyes, and while she was forcibly held back, the scalping knife did its revolting office. The bright sunny curls were hung at the belt of the savage warrior who performed the deed, while the boy was flung palpitating, and barely possessed of life at the feet of his parent...

…It was now Nora's turn to suffer, and another of these relentless savages, speedily seized hold of his now unresisting victim…"

Mentions: Mr. Phillip C. Tucker * Thomas M. League * T. Jeff League, the brother of C. J. * the De la Vega and Aguirre heirs * the Llano Estacado settlement * the JA and JJ ranches * the Palo Duro Canyon * the old Colton Atlas, was Dockum's Ranch on what is now the dividing line between Dickens and Crosby counties, on the Blanco or White river, which flows into the Salt Fork of the Brazos river near the division line of Stonewall and Haskell counties. * T. H. Behrens of Dallas, Texas * Charles Goodnight * Most of the historical writers speak of the old ranches of that section by brands. Goodnight's had JA, JJ, and XIT. * the Adairs, his ranch was subsequently divided up into several ranches * H. T. Burton * Dockum's Ranch * the Matador Ranch, the Spur Ranch and Pitchfork Ranch * the Capital Syndicate Ranch * Philip J. Tucker * Mr. J. Ralph Dailey of Legion, Texas * The Good Intent Stage Company * the Germantown Rail Road Depot * Mr. Van Amburg * Messrs. Tomkins and Neill * Bob Acres * Bridewell *

The writer of this sketch knew Major George W. Littlefield for over thirty years in the city of Austin. He was a unique pioneer character and looked on everything with a pioneer man's eye. Taylor gives his reminisces of the good man’s life in this account.

Looking Backward Through The Years

By James A. Wright, Bandera, Texas

In this account the author relates the difficulties of travel on the Texas frontier and especially of a trip made in 1883, from San Antonio to Eagle Pass.

Account by T. C. Richardson adds some further details to Dean T. U. Taylor’s very detailed and excellent "Life Sketch of Jesse Chisholm," which appeared in the Frontier Times for August, 1936 (the immediately preceding issue).

Account of murder of Mr. H. Harvel which was committed in Williamson county, TX. The original story appeared in the Florence (Texas) Vidette, June 16, 1900.

Olmsted and his crew are caught in a raging wildfire in this installment of the excellent exploration series. (Continued From Last Month)

"The grandest and most remarkable picture that had painted itself on my memory, had presented itself at the time when I came up the hill in the rear of the fire. The ground under me, and above the level of the eyes before me, was black as the darkness of the darkest night. I could see nothing and knew not on what I might place my foot. I stretched out my hands before my face, to defend me from anything that might stand in my way, and I could not see my hands. I particularly noticed this, and it seemed to me I was groping in a sea of darkness, when just over me there was an atmosphere of light. My eyes, looking upward, were dazzled. The tide of the fire moving on, in one grand clean sweep, and, through the waving flames and the turbid surge of hurrying sparks and lurid smoke, I saw, in distant brightness, the ragged edges of the protruding rocks, and of the rough bark on old trunks and branches of dwarf-oaks, and the young leaf points of their branches in the springing life, against the dim red dusk of the general grassy slope-and further up, the outline of the hill itself against the dark distant sky."

Account of Capt. James W. Winters, a San Jacinto veteran and renown Indian fighter who, after serving with General Sherman and then later as a mounted Ranger, finally settled near the Big Foot post office in Frio county.

Recollections Of Early Days In California

Mr. Lorentz offers excellent eye-witness record of San Francisco and other parts of California in 1874.

Account of was W. A. Peril, who lived and died in the southwest corner of Gillespie county, on a ranch about half way between Kerrville and Harper. He was a pioneer cow man and ranchman who held several records in the Olympic game of the cattle business. Peril held the world's record for a drive over the Horsehead Route. The route he went measured 1940 miles - it holds the record and this is his story.

Mentions: a small cemetery on the Peril ranch in sight of the highway from Harper to Kerrville * Goodnight, Oliver Loving * John Simpson Chisum * Horsehead Route * W. C. Lewis of Fredericksburg, and Pleasant Catman of San Antonio * Joe A. Slade * Castle Gap * Fruitland * the old Chariot Wheel quilt that has attracted attention in the county fairs at Fredericksburg

Brought An Aerolite Out Of Mexico

Account of a meteorite that had fallen on the ranch of Mr. Henry Mueller, near San Lorenzo, about ten miles from the city, which was said to be one of the most massive known to the scientific world. The stone weighed 5400 pounds and was placed on exhibition at the World's Fair in Philadelphia.

The Jibaro Head-Hunters Of Ecuador

Attention was made in the August, 1936 number of Frontier Times of a shrunken head, which was presented to Frontier Times Museum at Bandera, Texas, by Mr. Charles L. Fagan of Rahway, New Jersey. Since being placed in the museum this Jibaro trophy has been viewed by hundreds of people, all curious to know something about tire tribe of savages who practice head-hunting, and when they slay their enemies cut off their heads and shrink them in such a perfect manner that all the facial features are retained. Mr. Hunter offers the details of rituals and procedures for the ghastly paractice.

This is literally translated "the act of beheading or cutting one's throat." This particular bugle call is believed to have come into existence during the long wars when the Spaniards were driving the infidel Moors from their lands. The call was only for use either against Infidels or Rebels against the Spanish King; never in wars between Spain and another sovereign power. The Alamo defenders, of course, fought under the Mexican flag and were legally considered Rebels, and the no-quarter call was used against them.

This transcript was made by ear by Prof. Asbury of Texas A. & M. College after a veteran of the Alamo Campaign whistled the bars to him near the City of Mexico and is considered authentic.