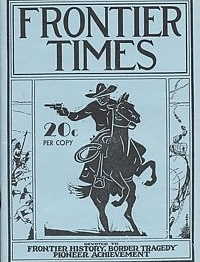 Honeymoon On The Old Cattle Trail

IN THE spring of 1886, Mary O. Taylor of Austin, Texas, married J. Howell Bunton, and they made a brief honeymoon trip to the East. On their return, they were forced to go on another honeymoon. Mrs. Bunton's father, Dr. M. A. Taylor, was a capitalist of Austin, a man of large land and real estate interests. Young Mr. Bunton, of English extraction, was almost gravitated into the cattle business. He bought large herds from Richard King, west of Corpus Christi, and had them driven and concentrated on Sweetwater Creek, five miles north of Sweetwater, Texas. This gathering took several weeks, and Mr. Bunton himself had no intention of going up the trail. But at the last minute the prospective herd boss was taken sick, and Mr. Bunton was forced to become herd boss of the three herds. The five thousand cattle were divided into three herds, the first consisting of steers, the second of cows and stock cattle in general, and the third of long yearlings. While there was a boss for each herd, Mr. Burton had to ride from herd to herd and keep in daily touch with each. His bride was in Sweetwater on the ranch with him when the sudden sickness of the prospective foreman called for Mr. Bunton's absence of several months. His plucky wife, raised in luxury in Austin, with true pioneer spirit, "took the bit in her mouth" and declared that she would go with her husband, as the climax of their honeymoon. Her husband protested, but Miss Mollie gritted her teeth and issued the "ukase," "I am going."' And go she went. The Concord buggy was provided, two stout young bays were drafted from the "remuda" to become harness horses. They were tough, wiry, and fleet of foot, and were promptly christened "Beautiful" and "Darling."

Sad tale of the days immediately following the Civil war, when "wreck and ruin, desolation and starvation covered the Southland from Virginia to Texas." When fortunes in slaves were gone and Confederate currency was no longer of value, when all the Southland was laid in waste and ruin, Texas frontiers furnished a gateway for a group of gallant but discouraged men to embark upon a self-imposed exile. These crossed over Texas borders in 1865 to try their fortunes in the armies of Maximillian in Mexico in preference to the endurance of what they considered intolerable conditions at home. This is the story.

H. B. Martin, an Amarillo, Texas, printer, recalls that bleaching bones of fifteen hundred horses-killed by the Mackenzie expedition to keep the Indians from using them-still marked the old Mackenzie trail when he went to the Plains in 1886. This is the story.

Account of old time cowman, Lewis Strickland a native Texan, born in Karnes county, six miles east of old Helena, July 23rd, 1857 and who came to Bandera county in 1876 and remained until he moved to California in 1899. Includes excellent old photo of Strickland.

Account of L. B. Williams who was "high sheriff and king of the jail" of Liberty county, Texas, and his wife and the unconventional, if not downright illegal resources they had to appeal to in order to secure justice.

Doak Bowles Was A Fearless Frontiersman

AMONG the early settlers of Uvalde county were the Bowles family. They were bold and fearless men, and aided materially in settling up the country and fighting the numerous bands of Indians who made desperate efforts to drive the border men back on the settlements east. W. B. Bowles, better known as "Doak," was born in Allewamby county, Tennessee, October 22, 1835, and came to Texas with his father, John Bowles, in the winter of 1849, and settled on the Lampasas river, in Bell county, four miles from Belton. John Bowles helped to organize Bell county in 1851. This is a lengthy and detailed account of Doak and his notable Indian confrontations.

Mentions: the Bowles home, on the spot where the beautiful little town of Salado now is * the Little River * John Bowies came to Uvalde county with his father in 1855 and settled on the Sabinal river in the Patterson settlement, six miles below the present town of Sabinal * the Bowles ranch * Leakey and Barrymore * the Leona * Westfall * the Wish ranch now * the Blanco * Tom Wall, who lived in Frio Canyon, * Rancheros Creek * Lieut. W. B. Hazen, who was in command of Fort Inge * Among the settlers were John Daugherty, John Kennedy, James Cormack, Ben Pulliam, Clabe Davenport, William Thomas, Frank Isbelle, Nobe Griner, Arnold, Arnette, Everette, Williams * Everette * John Kennedy and William Thomas * Frank Isbelle, Nobe Griner * Lieutenant Everette * Judge James McCormick * Black Creek * a man by the name of Wheat, of Medina county * Guide hill, six miles below where Sabinal now is * a frontier preacher named H.G. Horton *

THE BATTLE OF CONCEPCION

Account of early settlers of Bluffton, TX and of I. B. (Uncle Ike) Maxwell, who came to Texas from Arkansas and who were among the earliest residents of Llano county. Located in the extreme eastern end of Llano county, in a bend in the winding Colorado river, Bluffton is one of the oldest and most colorful communities in that section. It was settled in the early '50's by the family of "Uncle Billy" Davis and his kinsman, I. B. Maxwell. The completion of the Buchanan Dam on the Colorado river between Llano and Burnet, meant the doom of the historic little hamlet.

An Old Masonic Monument At Richmond

"In the old burial ground at Richmond on the Brazos is a monument erected in 1825 by William Morton, a brickmaker and layer, in memory of a brother Mason. The structure is of brick, about eight or nine feet high from the ground; the shaft on four sides stands on a pedestal five feet square and six inches above the ground. From a projecting cornice the whole terminates in a point. In each of the four sides smooth brick slabs are inserted, on which are found in, quaint lettering on one side this inscription..."

Is Jesse James Still Among The Living?

"There are many people living today, who are familiar with the career of Jesse James, who do not believe that James was killed by Bob Ford, and some of these folks are ready to accept the story that is being told by the man who is now appearing in theaters in many cities and claiming to be the real Jesse James.

August 9, 1936, the following article appeared in the Houston (Texas) Post. It was written by Rev. J. W. E. Airey, life-time chaplain of the National Frontiersmen's Association, and an authority on frontier history"