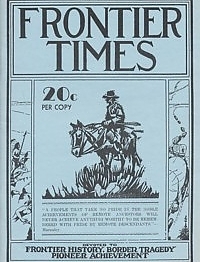 INDIAN HOLLOW is situated in the southeastern part of Llano county, Texas, and empties into Big Sandy Creek about three miles above the junction of Big Sandy Creek with the Colorado river. The territory drained by Indian Hollow is rather brushy, and studded with liveoak, postoak, and mesquite. It was the sight of this bloody battle that occurred in the year 1870.

John Reinhart Was In Many Battles

JOHN REINHART, who had a fine ranch on Big Seco, in Medina county, was one of the pioneers of western Texas. He was born in Bavaria, town of Orb, in 1832 and came to New Orleans in 1848, and to New Braunfels, Comal county, Texas, in 1849. He moved from there to Cibolo river, and thence to the Seco Creek, near D'Hanis, in 1854. Two notable Indian fights in which he was engaged as well as details of his life are here recorded.

WILL ROGERS' THOUGHTS ON THE HEREAFTER

The Stork Rides The Chisholm Trail

MANY herds of cattle went up the old Chisholm Trail from Williamson county, but perhaps the most interesting of all these hundreds of herds, the one that left Round Rock in the spring of 1871, is the most romantic. The trail from the south of Austin generally crossed the Colorado at or near Austin and then on by Round Rock, to. Salado and Belton, to the north up the old Chisholm Trail. G. W. Cluck had made all arrangements to take his cattle to Abilene and his courageous pioneer wife with her three children decided to make the trip with the herd. An old fashioned "hack" was provided as a carryall, a stout pair of ponies with the necessary camp outfit was obtained, and Mrs. Hattie Cluck went with the herd as they grazed and trod their weary way from Round Rock to Abilene. What makes this trip so romantic was an unseen rider that perched on top of the old back all the way from Round Rock to Abilene. Amidst the Indians, the danger and depravations, the result was Euell Standefer Cluck. Here is the story.

By Mrs. C. A. Bowan, in San Antonio Express.

AUNT SALLY RILEY, native resident of Llano county, molded the bullets used in the historic Packsaddle mountain fight. She was the champion bullet-molder of Llano county because her nerves were so steady. Aunt Sally is a member of one of the first families to settle in the southern part of Llano county, and also lived in the Oxford community about two and one-half miles west of her birthplace near Riley Mountain,, which was named for her grandfather, James Albert Riley. He settled there in the early 50's. Her parents were Mr. and Mrs. James Riley. "I've seen lots of Indians, have been around close to them," she said. "When I was growing up I could look out almost any direction and see them." When she was about 14 years old, some Indians came to her home one night and called to her father to come out. They came to the wrong house, for little Sally was also a crack shot.

Further Mentions: Her father was one of the firs judges of Llano county and was also postmaster at Riley Mountain for a number of years * The road from Llano to Fredericksburg * One of the early-day carriers, a man named Youngblood * the Moss boys, Eli Lloyd * the Riley Mountain neighborhood * the Riley family * Bate Berry, who lived on what was known as the Dean place, and Jim Lloyd, father of Eli Lloyd * Matthew Moss, * that section known as Cat Town * Aunt Betty Haynie, a pioneer hotel owner * Aunt Sally has two sisters, Mrs. Joe Garrett and Mrs. John Garrett, and a brother, Dave Riley, who also live in the Oxford community of Llano county

The account details a perilous cattle drive made by the Longfield family from their home at Camp San Saba, in McCulloch county, to Fort Sumner. The reason for the trip was that the Government was feeding the Indians in that section, and there was a market for the cattle. It was very dangerous for the mother and her children to remain at home, so the father decided that he would take the family with him. It proved to be a fateful decision.

Account of the life of Robert M. Williamson, one of the most colorful characters in the history of pioneer Texas. It is said that "Three-Legged Willie," judge and congressman of the Texas Republic, did more to establish law in hellroaring Texas and received less credit than any other pioneer patriot.

Hunting Buffalo On The Plains

This is an excellent and detailed account of a buffalo hunting trip that took place in 1875. Along with Mr. Cook, the participants were, Charles Hart, a Union ex-soldier, Cyrus Reed, Frank Williamson, and Warren Dockum. A man named Hadley accompanied the expedition with a freight team. He had six yoke of oxen and a heavy freight wagon. The party had two two-horse teams hitched to light wagons in starting out. One of these teams hauled provisions and camp outfit, which consisted of one medium and one large pined Dutch oven, three large frying pans, two coffee pots, two camp kettles, bread pans, coffee mill, tin cups, plates, knives, forks, spoons, pot hooks, a meat broiler, shovel, spades, axes; mess box, etc. The other one hauled the bedding, ammunition, two extra guns, grind stone, war sacks, etc. This is fascinating reading.

Account of the life of Theodore Adolphus Babb, better known to early settlers of the Panhandle region as "Dot" Babb. Mr. Babb was born in Saurk county, Wisconsin, and when he was two years old his parents moved to Texas, in a two-horse wagon, and finally settled in Wise county. In 1865, the Comanche Indians came in on a raid, killed Dot Babb's mother, and captured Dot and his little sister, and a Mrs. Luster, a young widow, who was living with the Babb family. Dot Babb was at that time a mere lad, thirteen years old. Babb was held as a member of the Comanche tribe through much of the formative period of his boyhood.

"Do you know what the best thing we ever had to eat was?" Mr. Babb asked with a chuckle. "I'll tell you. Whenever a buck killed a buffalo calf, the squaw rushed out and split the call open. She scooped every bit of the milk out of its stomach as quickly as she could and gave it to the children. It was the sweetest stuff I ever tasted, and was thick about like our gelatine".

Development Of The Percussion Lock

THE flintlock musket was a standard military arm for nearly two centuries. It was the principal weapon of Infantry forces from the Battle of Blenheim through the War of 1812. Its long barrel and simple stock has been depicted in countless drawings and paintings of both the Revolutionary soldier and the sharpshooting pioneer of a later era. It was a weapon of astounding accuracy and that fact alone possibly accounts for the length of time it remained in favor as a military firearm. Its chief drawback, however, was the time required to clean, reload, and prime the piece after its discharge ; and if that defect had not existed, we should perhaps be using a form of this old musket today, possibly a model similar to that used by the British Army for a period of fifty years or so, affectionately dubbed "Brown Bess" by the English Regulars.

Another inconvenience experienced by the users of early firearms including the flintlock weapons, was the pieces' tendency to misfire in wet or inclement weather. It was the effort to overcome this disadvantage that primarily led to the development of the percussion lock and eventually brought about our present percussion system. Here is the story.

Brief account of "Five Oakes Ranche," in the Nueces Canyon between Uvalde and Rock Springs, so named because five massive oak trees shade an acre of the front yard, and is a link with pioneer days.