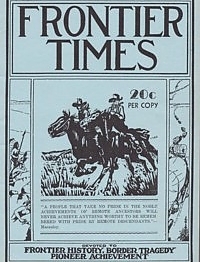 How Van Horn, Texas, Got Its Name

BRIGADIER GENERAL Robert Osborn Van Horn, U. S. Army, affirms that Van Horn, Culberson county, Texas, was probably named after his father, 2d Lieutenant James Hudson Van Horn, who was stationed there before the Civil War. Here is the story of the early development of that town.

Account details much good information on the running iron method of branding cattle versus the stamp iron method. Much detail included on the various brands operative into the 'open range' days of the 1880s and before.

Mentions: Gus L. Ford * W. C. Gay * one of Coleman county's pioneers, C. C. Hudson, branded `Coon' on the left side and as a consequence was known far and wide as Coon Hudson. * the pioneer, R. L. Dunman * a brand like 'Bar-Six' * the BSK brand of the Busk ranch * the ATB brand of the Adam T. Brown ranch * the Overall brand TYE, which was a contraction of Mrs. Overall's given name * 'Yong' which was the Andy Young ranch brand for both cattle and horses * the Morris ranch brand (Rafter-Three) * 'OH-Triangle.' * `Turkey Track' *

The Ghost Of Camp Colorado

Account of a substantial ghost, built of square cut stone and sturdy timber, but just the same it is a phantom, rising on the ruins of a forgotten past. It is all that is left of the army post known as Camp Colorado in the pioneer days of Texas. This camp, one of a line of posts built in the 1850's to protect the settlers from Indian raids, had a career as brief as it was stirring. Here is the story.

Mentions: the Yett settlement near Marble Falls * the Whitlock home on the east side of Long Mountain * the late Isaac Sampson Haile, who settled in the Long Mountain community in 1853 *

As the cattle industry was pushed westward by the oncoming settler, the cowman rode in the vanguard of civilization and flocked to those streams of living water as their only resource. Years previous to their arrival, Tascosa, destined to become the breezy cowtown metropolis of the Plains, was one of the few Mexican settlements that dotted the Canadian, and one Don Cassimero Romero, an enterprising sheep owner and freighter, was their patriarch. Worthwhile creeks, up which their fleecy flocks could be drifted, made this an expanding little area and redoubtable Mexican "villa." It was christened Atascosa by the Mexicans. Little did they know the ignoble future and ultimate demise that was destined for this village. Here is the story.

Recounts Days Of Buffaloes And Indians

B. F. Blanton, the son of Ransom Gwynn Blanton, a Virginian who helped the Allen brothers launch Houston on its path to metropolitan greatness, recalls in this story, the Texas of yesteryear when the great cities of today were the feeding grounds for vast herds of bison or the stamping grounds for large tribes of Indians.

Dean T. U. Taylor's new book, "The Chisholm Trail and Other Routes," published by Frontier Times in October, is receiving a lot of favorable comment from newspapers of both Texas and Oklahoma. One of the best reviews that has come to our notice is that given by the Chickasha (Oklahoma) Daily Express, and which is reprinted in this article.

Account describes two very entertaining and interesting booklets, the first "Under Texas and Border Skies," 111 pages, and the second "Tumble Weeds and Barb Wire Fences," 110 pages, both of which deal with the Panhandle country and West Texas. The author, a Mr. Logue is truly a pioneer in the Plains region.

The Blue Hills Of Bandera

Account describing original settlement of Bandera county which lies on the upper courses of the Medina river. When a few daring settlers began to locate on the upper Medina in the early 50's, it was as primitive as when Cabeza de Vaca skirted its boundary more than three centuries before. Giant cypresses lined the banks of the purling streams; pecans deployed in open order back of the close ranks of the feathery cypress, and showered down their autumnal. harvest for the taking; patriarchal liveoaks dotted the upland slopes and level glades, and tall cedars cast their shadows over …

"INTO THE SETTING SUN."

Description of "Into the Setting Sun", the title of a fine 193-page book describing the history of Coleman county written by Mrs. Beatrice Grady Gay, of Santa Anna, Texas.

THE writer of this article was not a historian, but a geographer and a geologist, who was the only man who has traveled over and scientifically studied every foot of the routes of three great explorers-Cabeza de Vaca, Francisco Coronado and Hernando de Soto. This is his story. Lengthy and detailed account also includes map of the expeditions.

A Soldier Of Fortune In Texas

Account given by R. H. Williams, "sometime lieutenant in the Kansas Rangers and afterwards a captain in the Texas Rangers." Captain Williams was an Englishman, a soldier of fortune and in this story, offers many thrilling anecdotes of his experiences on the border.

The Ku Klux Klan In Texas

By James A. Wright.

The roots and early development of the vigilante organization and especially its early activities in Texas is the subject of this account. One of the most active of the Texas clans was that of Tyler. There was a reason for this. Tyler was the Eastern head. quarters of the Federal forces that occupied the state following the Civil war. The force stationed here consisted of two regiments of colored troops. These troops, like, nearly all soldier bodies of that period, without due constraint were given to the practice of unlawful depredations upon the person and property of the citizenship of the community. This practice reached the point in and around Tyler where white women did not dare to leave the safety of their homes without male escort. Even the men would not venture out at night alone. This state of things finally became unbearable, when suddenly there appeared upon the streets and roads nearby a company of robed and hooded mounted men, who rode slowly and silently without the sound of voice or anything but that made by the hoofs of the horses striking the roadways. However, evidence of their activity was not lacking, for upon the limbs of trees and elsewhere could be seen almost every morning the gruesome dangling body of a negro soldier.

Stoicism And Endurance Of The Indian

Various accounts are offered in this story describing the incredible endurance and fortitude of Indians under privation, torture and suffering.