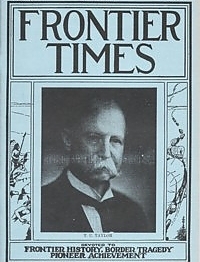 Account of the life and career of T. U. Taylor, who served for fifty years as professor of engineering in the University of Texas. "T. U." as he was affectionately known throughout Texas was the father of engineering education in this State and the graduates from his department probably number over a thousand. Thomas Ulvan Taylor was born in January, 1858, in a cabin on Bear Creek in the southeast corner of Parker County which was then furthermost margin of the Indian frontier, and his parents were poor, briar-breaking frontier settlers, who settled with their hand upon the trigger, under the constant threat of Indian massacre.

Mentions: was born in 1860, in what was then Lexington county, Texas * father's name was Samuel Fleming * I was christened Virginia Scott * moved to San Marcos, in Hays county * Burnt Boot, in what is now Medina county * the home of Mr. Galbreath * the Lott Johnson ranch * Atascosa county * Eli Loyd * North Prong of the Medina river in Bandera county * One of our neighbors was Bill Hind * we moved to Carrizo Springs and Mr. Loyd did well there * the J. W. Short ranch in Bandera county * Turkey Springs * Flat Rock * our present home above Tuff, in Bandera county *

The Refugio Colony And Texas Independence

The extensive article is an address that was delivered by Hon. Hobart Huson, LL. B., B. O., of San Antonio, Texas, on the occasion of the Refugio County Centennial celebration at Refugio, Texas, October 21, 1936 – it is the story of the part played in Texas Independence by those associated with the notable Irish settlement of Refugio.

Horrors Of Indian Captivity To Be Retold

Sketch of the life of one of London's most outstanding women, Mrs. Mary E. Bell, whose father came to Texas with Stephen F. Austin in 1828. He took up land in Jackson and Matagorda counties and later pre-empted a homestead in Lavaca county where Mrs. Bell was horn in 1858. In 1881 her family moved to Llano county and soon thereafter to Kimble county, where she has resided for more than one-half century.

The Early Pioneers of the West

Account especially depicting the life of Julius Nichols McKinney, where the town of McKinney, in Collin county, TX got its name. This old time ranchman eventually became a prominent cattle rancher in Frio County.

The Jews' Early Contribution To Texas

Account of notable Jewish pioneer citizens who helped settle the Texas Frontier through endeavors as merchants, noble service at the Alamo, at Goliad and, upon the bloody field of San Jacinto. Account is compiled from sketches of Jewish achievement by Dr. Henry Cohen of Galveston, Dr. David Lifkowitz of Dallas, and Dr. Ephraim Frisch of San Antonio, three eminent Rabbis who have themselves earnestly and unselfishly served Texas and its diversified population. The writer of the article culled from material compiled by them, and made a partial record of some of the outstanding occurrences of the lives of the early Jews in Texas.

Will Gay in Coleman Democrat-Voice.

Remarkable description of what Coleman County, TX was before it was dissected with barbed wire, roadways and other accoutrements of civilization – a day when navigation was done by the natural landmarks of creek, river, mountain range and other "trail marks."

January 15, 1851, at Paris, Texas, was born one who was destined to have a colorful and adventurous life and exemplify everything the word "frontiersman" stands for. Learning to ride almost as soon as he could walk, he early determined to spend his life following the trail of the cow. This is the story of the man - J. K. Miliwee.