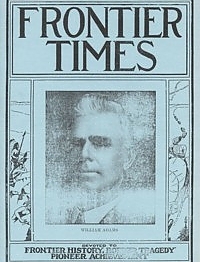 William Adams Came To Texas In 1852

Account of the early years of the social and industrial history of the part of Southwest Texas that lies south of the Nueces river—a history in which Mr. William Adams played an outstanding part. He was among those who came to this unsettled frontier, lived, and courageously met the perilous conditions that existed. He was equipped with energy, ambition, the highest type of moral character, and the vision to see richer possibilities in whatever line of endeavor he engaged in. His long life was a great adventure. And probably no one of the pioneers who were contemporaries of William Adams contributed more to the development of the part of the country in which they lived than did he, not along industrial lines alone, but in its social and moral upbuilding as well. Always standing for what was the best, his influence and aid was lent to that only which was constructive. This is his story.

Mentions: The Motts * by Peggy Dodson, a pupil in the Orange Grove, Jim Wells County * Walter Woodul * the mercantile firm of Gilpin and Belden * Antonio Moya * the Agua Dulce Creek * A. B. Dodson, a veteran of the Texas Revolution * Edward Bradley * Sarah Dodson * They settled in what was then the northwest part of Nueces county, now the northern part of Jim Wells county * Mr. Adams established a ranch a few miles south of the pre-sent town of Alice * Mrs. Mary Hinnart, of Faifurrias

The Bridges Brothers Of Mason

Shortly after the Civil War there came to Mason three Bridges brothers, M. V. (Van), S. F. (Lace), and J. D. (Joe) Bridges. These three Bridges brothers, and their wives, brought culture and refinement to the frontier village, and all are held in loving remembrance by the people there today. This is their story. Includes photos of M. V. Bridges and Mrs. Belle W. Bridges.

Looking back over the long list of statesmen and mighty men who have served Texas, we find, from the record he has already made as our Governor, that Jimmie Allred measures with the best of them, and surpasses many of his predecessors. As Governor of the largest State in the Union he had to meet and solve many problems that did not confront the honored patriots of the days of the Republic. His integrity, his sincere love for Texas, his fearless devotion to duty, his sound judgment in all matters of State, brought the state through two years of industrial strife, and in a masterful way is pulled Texas out of the greatest and most disastrous national depression ever known. This is his story.

By T. C. Richardson in Farm and Ranch

Account of Everett E. Townsend of Alpine, Texas, who was born of pioneer Texas stock, the breed that kept well out on the frontier as long as there was a frontier. Born in Colorado county October 20, 1871, he was only thirteen when his ranchman father moved to Eagle Pass. Two years later drought and disaster in the cattle business threw the fifteen-year-old boy on his own resources, and he went to work at $9 a month, eventually becoming prominent and successful. This is his story.

Gives account of brawling days of wild Kansas towns of Dodge City, Abilene, Ellsworth, Newton, a place characterized by "wild night life, gross wickedness, and gun battles unequaled in any other cow town in Kansas" and others.

Fight Between Indians And Rangers

Account of 1870 battle involving Frank Payne, who although still young, joined a company of rangers commanded by Capt. Rufus Perry. The captain was an old Jack Hays ranger, and was the same who had such a fearful experience in Nueces Canyon when he and Kit Ackland were so severely wounded. Captain Perry's company was stationed at a place called Little Red River, near Camp San Saba Springs. While there the rangers received information that a large body of Indians were raiding below and had carried off a drove of horses near Dripping Springs, in Hays county. The rangers lost no time and were soon at the scene of the raid and on the trail of the redskins. The trail was discovered near Shovel Mountain, and was so plain and fresh the rangers knew the Indians could not be far ahead, and dashed on as rapidly as the nature of the ground would permit, all eager for the battle. This is the story of what followed.

Account of raid that occurred on the 14th day of April, 1878, involving Kickapoo, Lipari and Seminole Indians, Mexicans and a white man. Their objects were murder and plunder.

Counted Cannon Balls As They Whizzed By

San Antonio Express, January 10, 1937 Account of Mrs. Theresa Clearwater who lived through a dangerous, unusual and difficult childhood due to the location of her home on the sands of Little Clarksville. She was there surrounded by four armies who fought literally over her head. During the peak of the war days, when troops of the North and South battled each other on one side of the Rio Grande and troops of the French and Austrians on the one hand and the Mexicans on the other battled just across the river—during that period Clarksville was a veritable no-man's land.

Account of the great general of Texas who in 1836 helped her establish her independence. He rendered distinguished services with the Army during the war with Mexico. He led a successful expedition against the Mormons in 1857 and 1858, and at the outbreak of the Civil War was in command or the Department of California.