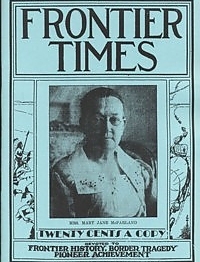 Battle Of Coleto And The Goliad Massacre

Mr. Duval, who survived the battle, and later the massacre of Fannin's men, wrote this account of this tragic event in Texas history:

A Mexican who arrived in Goliad, February, 1836, told Col. Fannin that Santa Anna, the Mexican general, had already crossed the Rio Grande with a large army and was invading Texas in two divisions—one toward Goliad and the other toward San Antonio. A few days later two Texans came to Goliad from San Patricio with the information that Capt. Grant and twenty-five or thirty of his men, stationed at that place, had been attacked and killed by Mexican guerillas. A courier also arrived from Refugio citizens, urging Col. Fannin to send soldiers to protect them, that they daily expected an attack from Mexican guerillas. So begins the sad account of the brutal slaughter of Goliad.

"CLEARING IN THE WEST"

Account of the old Washington hand printing press which for so many years lay outside the old capitol building at Washington-on-the-Brazos, and the frame of which has been mounted in concrete at the side of the building. It was formerly used in the printing office of The Texas Ranger, a newspaper established by the late Captain Joseph Lancaster, at Old Washington, in 1848, and was the original press used in printing that newspaper, and was discarded when the new cylinder press was installed. It was again used after the burning of The Ranger office at the close of the Civil War, until a new press was obtained.

Mentions: The Lancaster family, which was for a quarter of a century prominently identified with Washington county * the Herald, published in New York City by the famous James Gordon Bennett. Horace Greeley * Samuel A. Maverick and Mary Adams * Dr. John Shackelford * Mary Evalina Barnett * Colonel John Franklin Barnett * Dr. B. H. Carroll * Dr. Rufus C. Burleson * W. W. Herring * The Patriot, published at Houston, Mississippi * Mrs. General Scurry * The Lancasters established friend-ships, which have lasted for three or four generations, with the cultured families of Washington county, among them being the Jones, Baylor, Houston, Scurry, Hoxie, Greer, Giddings, Lipscomb, and numerous others, who are landmarks in the history of early Texas. Shortly before the Civil War Mrs. Lancaster's father, Colonel Barnett, came to Texas and settled at Round Top, over the line in Fayette county. This family, too, had been well represented in the Texas Revolution, several members of it having been signers of the Texas Declaration of Independence.

The Survival Of The Fittest

1878! To the present generation these four numbers mean merely a year that has passed. But back in the wild old days, when the first intrepid frontiersmen were venturing west of the 100th meridian on the Llano Estacado, it represented the turning point in West Texas civilization. This is the story of the settling of that region.

Account of the colorful and rugged life of a typical pioneer, who as a child sat on Houston's knee, and has lived to the present wonder age. Mr. Moore in the far west brushed elbows with cattle rustlers and gentlemen; roped tough mustangs from wild herds; knew Buffalo Bill and John Wesley Hardin, and even had a fleeting acquaintance with Wild Bill Hickok.

A Senate Of Pioneers

THE STORY OF ALFRED SIMPSON

"Alfred Simpson, a lanky mountaineer, has become a legendary figure in the cabins. Word of a war across the ocean came to the hills in 1917, and young Simpson enlisted in the army. During a tough engagement in France the order came for the American forces to retreat. Simpson looked up from his machine gun and drawled. `I'm from Texas where we don't retreat.' Single-handed the young hill- men held all enemy corners at bay, and finished his self-imposed task by bringing a score of German prisoners …

Murder Of The Dollahites In Blanco County

By Allie B. Jenkins

Account of brutal slaying of J. C. Dollahite and his son, Little Sammy by Comanche Indians near Birdtown in Blanco County in 1870.

Account of a remarkable pioneer Texas woman who came to Texas from Illinois with her family in 1861. She eventually settled in Fannin county and her life of high integrity and frontier resilience is the subject of this detailed and excellent story.