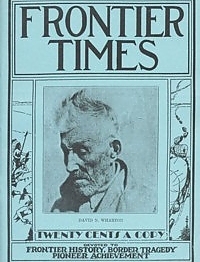 David N. Wharton, long-time Kerr county resident came from McNary county, Tennessee to Texas in 1857 as a boy with his parents and settled in Kerr county, which had been organized the previous year. He lived in that same vicinity for more than three-quarters of a century. Here is his story.

The Murder Of "Diamond Bessie"

One of the most sensational murders that was ever committed in Texas occurred at Jefferson in 1876. An account of this murder was written by W. H. Ward, who lived at Jefferson at the time, and later moved to Texarkana. This account was written in 1900, and was reprinted in the "History of Jefferson," from which it was taken. It details the murder of Bessie Moore, properly Bessie Rothchild, a young and beautiful woman, who became known as "Diamond Bessie" by the number and splendor of her jewels. Crowds came from afar to view the spot where the young mother had been hurled into eternity without warning, carrying with her the half-formed life of an unborn infant. Here is the story.

Account details the lives of Mr. and Mrs. Albert Maverick, Sr., who developed a large ranch in Bandera county, and moved there in 1878 when the country was still the wild frontier. The ranch property, located on the Medina river and Winan's Creek, comprised, several thousand acres of rich grazing land. Here they endured hardship and success. This is their story.

Account of the site of a United States fort—Fort Merrill which occupied the location for 5 years; then for eighty-odd years a part of the Putman Shipp ranch, at one time one of the large horse ranches of Southwest Texas. The old ranch site is on the west side of the Nueces river in Live Oak county.

A Century With The Texas Rangers

Jean Dale Sherman, in The Cattleman, Fort Worth, Texas

TEXAS RANGERS are history—like the Battles of San Jacinto and the Alamo. Their valiant deeds are deeply ingrained in the pattern of Texas liberty.

Most early-day rangers were mere boys led by commanders not much older. They were all-nerve, fast moving individuals; and splendidly equipped physically and mentally. They had a genius for meeting emergencies, averting disaster, and carrying law to law-less regions. Every hour meant for them a change of pace and tactics; and each day found their duties stretched over more territory. Their ranks were filled with all-star troopers, for only such could stand the gaff and live up to the code. They became the most famous body of warriors on the American continent. This is their story. Includes old photos of rangers.

Jefferson Davis Dillingham And His Banjo

Account of the son of Brice Dillingham and Sarah Woodward who were married near Lynchburg, Tennessee, about 1835, and moved to Texas with their first child, which was only five months old in 1854, and settled on Onion Creek. They lived there one year only and moved to Austin. They settled, along with son, "Dave" in Williamson county, in the Florence neighborhood. There was an old negro named Wash Hubbard who could play the banjo like it was part of his body and Dave knew every song that the Southern negro had ever heard. When Dave first heard Wash Hubbard play that old banjo he was a mere boy. On the instant he was wild to learn to play but he had no money and could not buy a banjo. Finally he found an old gourd. He stretched a piece of hide across it, but he had no strings. But his inventive genius met the situation. He went out to the old gray mare and pulled hair out of her tail; he twisted them into a strand and stretched it across the old gourd banjo and then hit the strings and kept on hitting them for fifty years. He listened to old Wash on every dance occasion and it is said that at some times his nose got into the way of Wash's banjo strings. His father finally seeing the eagerness of Dave, killed a squirrel and stretched it over the top of the old gourd and Dave had an old banjo of the Colonial type. He learned nearly all the old tunes from Wash Hubbard, like "Green Corn," "Turkey in the Straw," "Arkansas Traveller," and "Buffalo Gals." This is his story.

The Borden Murders Remain A Mystery

Account of the Borden murders which occurred in 1892. Andrew J. Borden, Fall River bank president, was chopped to death as he napped on the horsehair sofa in his sitting room on the hot-sultry, far away day of Aug. 4, 1892. Buried near him are his first and second wives, the latter also a murder victim; and three daughters by his first marriage, one of whom—Lizzie, was tried for his murder and acquitted.

In death they are united, as they never were in life, and with them slumbers the story of what happened in the modest Borden home on that fatal Thursday morning—a happening that marks the Borden case as one of the most extraordinary and in many respects the most incredible in American annals.

THE HEFFINGTONS were ever a pioneer race. Their original home was near the banks of the Tennessee river, but when the great emigrant trek started in the late forties to California and the west, Stephen Heffington packed his goods and chattels in a wagon and joined the great caravan from Tennessee and stopped for three years in Saline county, Arkansas, where he conducted a general store on the banks of Saline river. He finally located in the southeast part of Parker county, Texas, and here he settled in about 1848 on a beautiful tract of land on the north side of South Bear Creek, about four miles from the present town of Cresson. Here he built his home and opened up a farm, fencing it with rails gathered from the bottoms of Bear Creek, poles and rocks. This is the story.

This account is taken from a small booklet entitled "Early Days in Central Texas," by F. M. Cross, and published in 1914. The writer came to Comanche county in 1855 and settled about three miles from where Newburg now is, on Mountain Creek.

(The following is taken from a small booklet entitled "Early Days in Central Texas," by F. M. Cross, and published in 1914.)