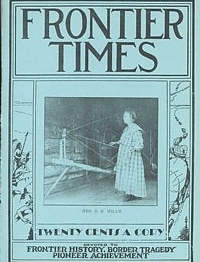 Cherish Memories Of Days Gone By

Account of frontier settlers Mr. and Mrs. Bartley Burris Milam. Mr. Milam, when he was about eighteen, was employed as a freighter to haul merchandise from Brenham to Austin. These were both small towns then. Brenham was the terminal of the railroad, and he hauled lumber, cotton, whiskey, and merchandise. In frontier days Mr. and Mrs. B. B. Milam lived in a log cabin, but later replaced it with an unpretentious frame house, tucked among the cedars back from the main traveled road near Spicewood. Here is their story. Includes old photo of Mr. Milam.

Some Pioneer Fiddlers Of Parker County

Pioneer fiddlers described in this article include: Arch Bozzell, Jim Heffington, Miss Enochs, who could play a fiddle about as well as Jim, Newton Hawkins, the "Unknown Fiddler"

Account of Mrs. Ida Stringfield Hatfield, who had experienced some of the tortures meted out by savage Indians in the early days on the Texas frontier. She was the wife of William Hatfield, one of Bandera county's best citizens

Thomas Stringfield, with his wife and three little children, two little boys and a girl, were attacked by a band of about fifty men, Indians and Mexicans, while going from Pleasanton to their home in McMullen county. Mr. Stringfield and his wife were killed, the little girl, Ida Stringfield, was horribly lanced with spears and thrown into a patch of prickly pears and left for dead, while the two little boys were carried away and never heard of again. The band of raiders came from across the border, and hastened back to the rendezvous in Mexico before the hastily organized posse of settlers could overtake and chastise them for their crime. Ida Stringfield was found and taken to the nearest frontier cabin, where she hovered on the brink of death for days, but finally recovered. Seven spears penetrated her body, and she suffered from the cruel thrusts as long as she lived.

Account not only describes various cattle brands, but also contains the chart created by a pioneer woman of Bandera county, depicting the cattle history of the region. She is Mrs. Charlie Eckhart, the daughter of a Bandera pioneer, who is a native of the soil, and has cherished all the traditions and ideals of the old Texas.

The Webster Massacre In 1839

Account describes the brutal Webster Massacre which occurred 2 miles east of Leander in 1839. The following sketch of this massacre was written by Martha Virginia (Webster) Simmons, living at that time at Fernly, California, October 19, 1912, and was written for Mr. J. H. Faubion of Leander in Williamson county, Texas.

A Bloody Murder In Central Texas

Gruesome account of the murder in 1846 in Burnet county, TX of a man named McKeever, who when they hauled him up from the well into which he been thrust discovered that his throat was deeply gashed from ear to ear and nearly every inch of clothing on his half-stripped body was covered by caked blood. The blood was still vividly red because of the cold and moisture at the bottom of the well. The head was dangling by a thread. It had almost been severed from the body. Gunshots dotted his body and clothing. He was as completely riddled as if he had stood before a firing squad of a thou-and men. The body was terribly mangled.

Lengthy, detailed and thrilling account of voyage that was made by this intrepid young woman in September, 1843, on the schooner yacht Dolphin from England to the then struggling Republic of Texas. This account details experiences and first-hand observations of life in the Caribbean ports enroute to Texas.

But The Bump Was Absent

Albert Snyder died exactly on time. He breathed his last in strict accord with a timetable worked out weeks in advance by his murderers. The blow that bashed out his life fitted in precisely with schedules of trains and movements of the United States mail. Mathematically, it was perfect. The first equation—as far as the police were concerned—began when Albert's daughter, Lorraine, was wakened by a tapping on her bedroom door at 7:30 o'clock on Sunday morning, March 20, 1927. The girl sat up in bed and listened. Lorraine was only 9, and she was frightened. She called her father. No answer. She called her mother. No answer. So she went to the door and turned the knob. Face down on the floor outside lay her mother, Ruth...

Account of the Lone Star flag creation of a Georgia girl who never set foot on Texas soil. She became known as the Betsy Ross of Texas.

Mentions: E. D. Harrington of Pantano, Ariz., one of the two only living members of the group of white men who routed a band of Indians several times their number in the historic Packsaddle, Indian fight of Llano county on Aug. 4, 1873 * Eli Loyd * Dr. Martin Reuther *

Account of certain notable relicsof New Mexico's history that were brought to light on the sun-seared banks of the Rio Grande, two miles northwest of Bernalillo. The glories of the Puaray and Kuana Pueblos, two adobes of the Tiguex Indian province, which in 1540-1541 gave shelter to Coronado, the first Conquistador to traverse the banks of the river, were uncovered by workers of the Works Progress Administration. These are the details.

Account of Albert Schwandner of Brackettville, who in this story, relates first-hand the terrible experience of being an eye-witness to the brutal slaying of his mother by savage Indians, and of his own blood-stirring capture shortly afterwards. The tragedy took place where the little city of Camp Wood, in Real county, now stands. In the fall of 1864.

The Restoration Of Mission San Saba