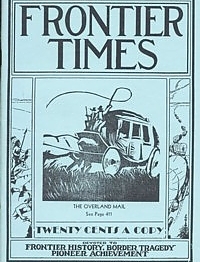 Account of what was known as The Jackass Mail, the forerunner of the pony express and the northern stage lines, also known as the "Great Southern Overland."

The nation first received an over-land, Atlantic-to-Pacific mail service in the fall of 1857, when James E. Birch's San Diego-San Antonio mail began operation. With San Diego and Los Angeles spurs at its western end, the southern mail route ran across San Diego county through Warner's, Vallecito, and Carrizo to Ft. Yuma on the California side of the Colorado river, across the stream and through Tucson, Ariz., to El Paso, Tex., and on to San Antonio, where it connected with rail, stage and steamer lines to the east.

Rattlesnakes Have Many Enemies

Story describing natural enemies and predators of the rattlesnake.

Some Of Our Own Texas Folks

Some years ago A. W. Young, of San Antonio, wrote a series of reminiscences linking past difficulties with present day achievement, and in one of his very interesting articles he told of the efficient work of W. G. Bralley, who was an officer in Montague county for a period of years, and also served as police commissioner at Wichita Falls. The record of this man is so outstanding that we give it pretty much as Mr. Young wrote it some thirteen years ago:

By T. U. Taylor, Native of Parker County

The "calls" and "figures" and "side remarks" are here reproduced as of the late sixties, as danced along the Bear Creeks, and Lower Clear Fork in Parker county, Texas, covering that territory from Cresson to Benbrook, and from Aledo to Mustang Creek. There should be four to six couples for these calls. A couple consisted of a boy and a girl, the girl always on the boy's right. I have danced many of these while Arch Bozzell and Jim Heffington made their old fiddles proclaim to the world the direlections of Cotton-eyed Joe and the beauty of the Buffalo Gals.

Mentions: The "calls" and "figures" and "side remarks" are here reproduced as of the late sixties, as danced along the Bear Creeks, and Lower Clear Fork in Parker county, Texas, covering that territory from Cresson to Benbrook, and from Aledo to Mustang Creek. There should be four to six couples for these calls. A couple consisted of a boy and a girl, the girl always on the boy's right. * Arch Bozzell and Jim Heffington * A—CIRCLE LEFT. HONOR YOUR PARTNER * B—BALANCE ALL * 1. RIGHT AND LEFT- (Regular figure). * CHASE THE GOOSE * BREAK THE SNAKE * WHIRL THE SQUIRREL * DO-SEE-DO DOUBLE SWING, or FIGURE EIGHT * LADIES TO RIGHT * COQ * LAI Call * SWING * COQUETTE * LADY AROUND LADY * GRAND RIGHT AND LEFT * CAGE THE BIRD * ELBOW CLUTCH AND RIGHT ARM CLING.

The Pioneer Settlement Of Acton

From the History of Hood County, by Thos. T. Ewell.

Excellent historical and genealogical account of Acton, a community in Hood county, TX of several square miles, extending to Fall Creek on the east, Long Creek on the north, and down Walnut to the Brazos.

Lengthy, detailed and thrilling account of voyage that was made by this intrepid young woman in September, 1843, on the schooner yacht Dolphin from England to the then struggling Republic of Texas.

On the roll of those men of giant intellect, of dauntless courage, of unsullied reputation and unquestioned fealty, who planned for the organization of an independent government in Texas and whose wise and heroic conduct made possible the realization of that dream, stands the Lame of Lorenzo De Zavala—scholar, statesman, patriot and first Vice-President of the Republic. Here is his story.

Mentions: Emily West, a daughter of one of the leading families of New York, and who as his wife was pronounced one of the most beautiful women ever-to have been presented at the Court of St. Cloud * San Juan de Ulloa * Bustamente, Pedraza and Santa Anna * Joel P. Poinsett * Grand Master of the Yorkinos * Grand Scribe of Royal Arch Chapter No. 1 in Mexico City * Mirabeau B. Lamar * Governor Oran M. Roberts * the sculptor, Coppini

The Little Village Of Shelbyville

Nestling among the tall graceful pines and broad spreading oaks of Eastern Texas lies the little village of Shelbyville. Far removed from the stir and bustle of the busy world about her, quietly sleeping away the years with a tranquility that reminds one of the travelers' descriptions of the little Judean village of Bethlehem and the peaceful hills upon which the shepherds have been grazing their flocks for four thousand years. But this little village has not always been so quiet. In the old brick court house that once stood in the town square, the voices of the leading lawyers of Texas have pleaded the cause of their clients. More than one murder case that attracted state-wide attention has been tried by some of the greatest jurists that have graced the bench of Texas. Here was enacted the quite stirring events of the Shelby County War between the Regulators and Moderators, which was ended by General Sam Houston declaring martial law. Here was located the famous Huntington School, patronized by hundreds of young men and women from Texas, Louisiana and other states, and conducted by W. C. and Mary S. Huntington prior to the free school's entry. From this school have gone out men and women into all professions and pursuits, pioneer preachers, doctors, lawyers, merchants, and other vocations. This is the story of that town.

The Country Schools Of Fifty Years Ago

In pioneer days, the country schools in Texas were somewhat different from what they are today. In the first place the buildings were different. The average country school house at that time was about as large as a one-room dwelling. I remember the school house at Loyal Valley, in Mason county, was of red sandstone; it is still in use. My father, J. W. Hunter, taught in that old school house in 1879. The school house at Peter's Prairie, also in Mason county, was a rough lumber building; it's place has been taken by a modern stone and concrete building set in a different location. The school house at old Camp San Saba, in McCulloch county, where my father taught school in 1882, was a small rock building on a hill, but it has long since disappeared. At Menardville, where he taught in 1884, and for several terms later, the school house was a two-story unpainted lumber building. It was torn down over thirty-five years ago, and replaced with a stone building. The old rock school house at Fort McKavett, in Menard county, where he taught in 1886-7, is still in use, and is no doubt the oldest school house in continuous use in the State. It was built in 1852, I believe, and has been used for school purposes for eighty-five years without a break. The early schools at Fort McKavett were for the children of the officers and soldiers at that post; it is said that the father of Mrs. Franklin D Roosevelt attended school there when he was a small boy. I understand that a great "home-coming" event is to be arranged soon for all former pupils of the Fort McKavett school, and when it comes off I intend to be there, for I can proudly boast that I am one of those pupils.

In 1852, when little John was only three years old, Capt. Bill Marlin, his father, a former Texas ranger, moved with his family from Marlin to the Indian reservation located near the junction of the Clear Fork and Brazos rivers in what is now Young county. He, with the famous trader, Charles Barnard, had a contract with the government to furnish beef for the Indians of the reservation.

This same Bill Marlin, when a mere lad, climbed a large cottonwood tree located near a spring, now included in the city limits of Waco, and displayed a flag of truce which was recognized by the Indians and led to permanent peace with the Waco tribe. Uncle Johnny had the Indians as his only playmates during child-hood. He lived among them until he was 18 years old, spoke the Caddo language, played and hunted with the Indians, used their bows and arrows with much dexterity, and declares that the Indian boys were more agreeable play-mates than the white lads. For much of the time the Indian women were the only neighbors of his mother, Mrs. Rebecca Sutton Marlin. Mr. Marlin insists that most of the trouble with the Indians was caused by unscrupulous whites and bad whiskey. Here is the story of this pioneer settler and his family.

Account of Mr. James A. Drummond who was born in Lafayette county, Missouri, May 10, 1845, but came to Texas in 1875, and settled in Paris in 1883. When James A. Drummond, was a youth he left his home in Missouri on cattle driving and wagon train ox driving trips on the western plains. He relates in this account, notable aspects of tht and other ventures as well as his days in Paris, TX.

Sad tale of an entire colony of settlers who mysteriously disappeared while en route from Del Rio to San Patricio, and supposedly both the people and their carts were thrown into the Espantosa Lake. The lake is almost on a line from Del Rio to San Patricio. It is very narrow and deep. It was a place that would suggest to the Indians, if they had killed those people near the lake, to dump their bodies and their carts into the lake, and thus completely cover up any evidence. And they could go on leisurely with no fear of being pursued. But many mysteries attend the details of the event. They are discussed in this article.