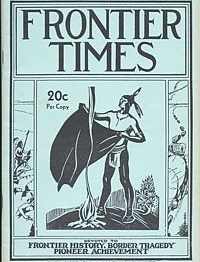 James V. Latham was born at Vienna, Maries County, Mo., July 7, 1859. He was the son of G. W. A. and Sarah Jane Gibson Latham. His parents moved to Texas in 1861 when James V. and his sister Annie, were small children. Sanford Backues and Joe M. Gibson accompanied them on this perilous journey. It was made during the turmoil of the beginning of the Civil War, and many were the regiments of soldiers that passed them as they were traveling. They eventually settled on Spring Creek in Blanco county, Texas, then in a few years, moved over to the head of Wright's Creek, at what is known as the A. Grote Ranch. Here the marauding Comanche Indians stalked, ever ready with the scalping knife to murder the pioneers or carry them away. They made three raids on this place, stealing horses. James’ life and further service as a ranger is the subject of this story.

Account of life-long Bandera county man, Fabian Hicks who was born near the village of Bandera in 1859, the son of Mr. and Mrs. F. L. Hicks. He was the eldest of ten children, all of whom were raised in Bandera county. His father, F. L. Hicks, came to Texas in 1855 from North Carolina, and joined the expedition under Captain James H. Callahan to cross the Rio Grande into Mexico to chastise a tribe of Indians that had been depredating on the frontier of Texas. After returning from this expedition he came to Bandera county, which was then a wild, unsettled region. Here he was married to Miss Hedwig Anderwald, and settled down to make this region his permanent home. He served as sheriff of this county for several terms, and was quite active in ridding the country of outlaws and undesirable characters, and often went on trail of Indian raiders. Such was the character or the father of the subject of this sketch. Includes photos.

Fort Martin Scott is almost a legend in the history of Fredericksburg and one about which very little is known. Few people realize that close to Fredericksburg lay at one time a United States frontier fort, where bluecoated infantry marched, where cavalry men went through mounted saber drill, where through the quiet valley buglers played morning reveille and sounded taps at night.

Two miles from Fredericksburg the Austin Highway passes by the site of the fort and even crosses directly over the spot where the powder house stood. Although little has been written or said of Fort Martin Scott, the traces of it are by no means lost. This is the story.

The Mission San Saba was founded in the year 1756. The object to be attained in the establishment of this mission was of a three-fold nature : the conversion of the Apaches; to check in a measure the raids and forays made by Northern tribes upon the mission settlements on the San Antonio river: and as an outpost against the encroachments of the French. Article is very extensive historical study on the old mission..

Captain James B. Gillett Passes On

The boy, Jim Gillett, learned to ride at an early age, and became familiar with all the aspects of frontier life. He joined Company D, Texas Rangers, at Menardville in 1875, and for some time served under Captain Dan W. Roberts; later he went to Ysletta with Captain George W. Baylor in 1879, and after serving six and a half years of the most trying times of this great organization the resigned to take up the duties of City Marshal and later Chief of Police of El Paso. Tiring of public service, he resigned in 1885 to accept a position as manager of the G-4 ranch in Brewster county. Captain Gillett was a man of fine judgment, obliging and courteous. As an elder in the Marfa Christian Church his advice and leadership was highly regarded. He had served as President of the Texas Ex-Rangers Association; as a director of the Marfa National Bank; as president of the Highland Hereford Association. At the time of his death he was president of the Bloys Camp-meeting Association, and of the West Texas Historical and Scientific Society. During the administration of Governor Ross Sterling and of Adjutant General W. W. Sterling, the appointment as Captain of all Texas Rangers for a life period was conferred on James B. Gillett, he being the only person ever to receive that honor. Here is his story.

In 1882 my father, John Churchill, rode horseback from Lee county to Mason county, Texas, looking for a new location. He was then sixty years of age, his children were all married and gone into homes of their own. He stopped and visited his son, Sam Churchill, who was then working in a dry goods store at Tow Valley, and also his son, Tom Churchill, and a daughter, Mrs. Elliott, then living in Hays county, and another daughter, Mrs. Mary Wright, also of Hays county. He traveled about five hundred miles on this trip. Finding conditions in Mason county to his liking, he located there in 1883, and remained there until his death in 1908. He was married in Mississippi to Miss Elizabeth O. Gwen, in 1848, and they carne to Texas soon afterward. My Mother never saw any of her relatives again.

Account of noted cattleman, John R. Blocker who drove his first herd of cattle up the Trail to Abilene, Kansas in 1873. At first the outfit was known as Blocker Brothers, John and Bill, but Bill must have dropped out as it was always John R. Blocker towards the last. Their road brand was a reversed seven. This is the story.

The Hero Of Packsaddle Mountain Passes

Account of William Eli Loyd, (Captain Loyd, as he was familiarly known), who came to Texas from Mississippi with his parents when he was two years old, and was reared in Llano county. It was while living in that county that he participated in the noted battle of Packsaddle Mountain, which took place August 5, 1873. This was a desperate fight between eight cowboys and twenty-one Apache Indians.