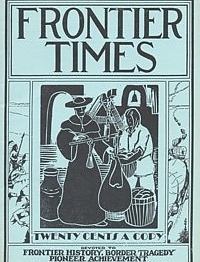 July 26 was a proud occasion and a red letter day for history-minded citizens of San Patricia county when a gathering of 1,000 persons from all parts of the county and from adjoining counties, assembled at Round Lake, near the town of San Patricio on that date for dedicatory ceremonies of a marker for commemorating the founding of the Irish colony which settled the county in 1836.

The Title Of Dona Sofia

Dona Sofia, was the great-granddaughter of Don Miguel Nemecio Silva de Peralta de la Cordoba y Garcia de Carrillo de la Woes, the original grantee. As indicated by his name he was a nobleman of great distinction, holding among other orders such exalted titles as Grandee of Spain, Sir Knight of the Redlands, Gentleman of the King's Chamber with privileged entrance, and of course Baron of Arizonaca. The title dispute of this nobleman was against the United States of America and pretained to a massive 12 ½ million acres of land roughly between Phoenix, AZ and Silver City, NM.

Monumenting At The San Saba Mission

By Dr. Robert T. Hilt, in The Dallas News.

Three conspicuous characters stand boldly out in the early history of the two San Saba Mission settlements They are as follows: Father Giraldo de Terrero, a priest outwardly had charge of founding of the mission and the handling of its funds. Colonel Parilla was the military executive in command. But the real control was two hidden hands of Don Pedro Romero de Terreros of Mexico City, cousin to Father Terrero, alleged owner of rich mines at Padueea and Real del Norte, and founder of the National Pawn Shop of Mexico, although in plain words he was a promoter. The third and most outstanding name in connection with the mission villages is …

Lengthy, detailed and thrilling account of voyage that was made by this intrepid young woman in September, 1843, on the schooner yacht Dolphin from England to the then struggling Republic of Texas. This installment focuses on her arrival at the port of New Orleans – her description of 1840’s New Orleans is striking. Story goes on to describe first sights of Texas.

Travis, The Firebrand Of The Revolution

Much of the greatness and glory of Texas, rests upon the supreme sacrifice made by William Barrett Travis and his immortal comrades at the Alamo, when those glorious one hundred and seventy-one heroes for eleven long days held four thousand of the best trained and armed soldiers of Mexico at bay and fanned to white heat the fires of patriotism in the hearts of the colonists and inspired them to achieve victory and independence on the immortal field of San Jacinto. This is Travis’ story.

Mrs. Fred Ludwig, whose death was recorded in a recent issue of the Standard, was the last surviving member of the Henry Kensing, Sr., family. When Mrs. Ludwig was but five years old her parents were brutally murdered by a group of marauding Comanche Indians. This account is translated from the "Test Ausgabe" issued on the occasion of Fredericksburg's fiftieth jubilee celebration in 1896 by Robert Penniger. The story, told by the mother of Mrs Ludwig before her death from the wounds inflicted by the Indians, was originally written in German.

When Lieutenant Sheridan Came To Texas

The early career of General Phil Sheridan started in Texas. It was General Sheridan's impetuous charge with 20,000 Union troops up the sides of Missionary Ridge in November 25, 1863 that added a new dramatic and courageous page to American history. In the Battle of Chattanooga the four greatest generals of the Union army were present—Grant, Sherman, Thomas, and Sheridan. And by popular acclaim Sheridan was considered the hero. Here is his story and his role in Texas history.

William Napoleon Hiler was the first sheriff of Sterling county, and held that office eight years. He paved the way for others to come and make safe homes He gained the second best record in Texas for catching bad men. In early days around 1878, the bad men had a habit of moving farther west along the rivers where, game was plentiful, and a few of them attempted to hide out on the north and middle Conchos, but after about four years of Bill Hiler's activity as a fearless sheriff, trailer, and sure shot with six-shooter and rifle, bad men began to move farther west to the Pecos. And there were times, when he went as far as "West of the Pecos" to get his man. This is his story.