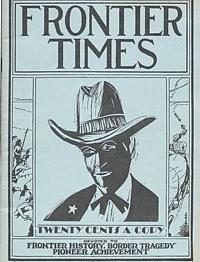 Account of an Indian raid in Bell county in the spring of 1859. The Indians murdered Mr. and Mrs. John Riggs and a Mr. Pierce, and captured a boy, Dave Elms, and two little girls, Rhoda and Rebecca Riggs, but these escaped. It is a sad and brutal story.

Mentions: Captain B. F. Gholson * Evant, Texas * the northwestern part of Bell county, near Sugar Loaf Mountain * Mr. Gholson, who lived about six miles from where the murders occurred * Mr. Pierce, Mr. Riggs, Mr. Elms, and a few others lived in the new settlement near Sugar Loaf Mountain * Ambrose Lee whose home was also in the little settlement * A. M. Woods * man, whose name was Peevy * Captain Dameron * Thomas Riggs came to Bandera county from Riggsville, Arkansas, with a man by the name of Clark * the Wilson Clark place * Riggs settled on Cypress Creek, some twelve or fifteen miles southeast of Bandera * married a man named Benton

When The Jury Came To The West

In 1849, just after Uncle Sam had added a new addition, known as New Mexico and California, to his charming but rambling country home, Socorro was a peaceful Mexican village, its adobe houses reflecting the sun of the upper Rio Grande Valley. Between it and the American settlements of Texas, the Comanche, ruled and were more than willing to dispute every foot of the territory. But the Americans, "Hell bent for California," to the gold mines, had made trails through, and by 1851 Socorro had been transformed. This is the story.

When Mackenzie Swept The Plains

Although Fort Concho was among the last of the chain of forts established to protect early Texans from Indian forays (it dates from December 4, 1867), it served as the head-quarters for one of the most brilliant Indian fighters Texas army annals know. And from its historic parade ground there wound, one summer day in 1875, one of the largest expeditions West Texas has seen, before or since, to explore the then unknown Staked Plains region.

The Indian fighter-who did more to rid Texas of the troublesome Comarches and other tribesmen than any other man-was Brevet Brigadier General Ranald Slidell Mackenzie. When the California gold rush of 1849 attracted attention to West Texas as a low transcontinental route, some attempt was made to hold the Indians that infested the country in check. But the raiding habits of uncounted centuries were not to be lightly set aside. The Civil War saw the withdrawal of Federal troops from these frontier posts, saw also the draining of man power from Texas itself. And by the close of that conflict in 1865, the Indians had things pretty much their own way in the then little known confines of the western portion of the Lone Star State.

The situation called for drastic measures and General Mackenzie because of his Civil War record, drew the assignment. It was plenty tough, not only because of the Indians, but because of hunger, thirst and exhaustion. These made operations exceptionally difficult. Here is the story.

BY Will H. Mayes