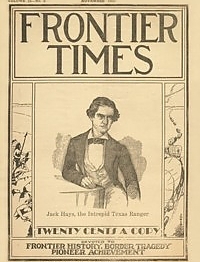 Among the many noted Indian fighters in the early days of the Texas Republic none perhaps holds a more conspicuous place than Colonel John C. Hays, more familiarly known as Jack Hays. He was born at Little Cedar Lick, Wilson county, Tennessee, near the Hermitage, on January 28, 1817, and came to Texas some time during 1836, a short time after the battle of San Jacinto, when he was about nineteen years of age. He fought Indians in command of Texas Rangers until 1846, when he went to Austin, where he received a commission to raise a regiment of Rangers to serve under General Taylor in the Mexican War. This regiment enlisted for six months in July, 1846, and won a reputation that echoed round the world. It was by his invaluable and unrivaled services in the Mexican War that lie was promoted to the rank of Colonel. At the close of the war he resigned his command. In 1849 Colonel Hays left San Antonio in and went on to California where he became the first sheriff at San Francisco. Here is his story.

The Killing Of The Indian Chief, Iron Jacket

The experiences of W. D. Mathews, of Coleman County, Texas, were written by Captain H. A. Morse iii the following article, which was published in the Pecan Valley News, Brown-wood, Texas, in 1899.

The Trail Of The Chisholms

This story is not the story of a cattle trail or a trading expedition, but a chase after the Chisholm family. The trek of the Chisholms travels a zigzag route. It stilted in Scotland, landed in South Carolina before the Revolutionary War, scattered over the old South Carolina, and then joined the great trek to the West and North-west through the mountain passes into that maelstrom of pioneers, back-woodsmen with Decherd rifles, Cherokees, Shawnees, patriots, pathfinders, heroic men, heroic women, Indian massacres, murders, inter-marriages with the Cherokees, and statecraft that created the State of Franklin and founded the State of Tennessee. The account includes photos and maps of the Chisholm legacy. This article is an important contrinbution to Chisholm genealogy.

The Chihuahua-El Paso Expedition In 1848

From John Henry Brown's "Indian Wars and Pioneers of Texa,,." .

When the Mexican War closed and the last of the Texian troops returned home in the spring of. 1848, the business men of San Antonio and other places became deeply interested in opening a road and establishing commercial intercourse with El Paso and Chihuahua. The United States government also desired such a road. Meetings were held and the plan of an expedition was made - this is the story.

Regretted The Killing Of An Indian

Murray relates events that occurred some fourteen miles west of Coleman upon Jim Ned creek near the fort of old Camp Colorado. His killing an indian "for the fun of it" became something he ended up regretting years later. Here is the story.

The facts :a the thrilling incident of ranger life are recounted by the old Texas ranger, Thomas Galbreath. While Mr Galbreath was not a participant, he was a member of Capt. Jack Hays' company of rangers at the time, and well remembers all of the particulars of this frontier episode. The incident occurred in August, 1844, about a month after the fight in Nueces Canyon, Captain Hays sent four of his men back to the canyon to see if there was any fresh sign of Indians there. The men sent on this rather hazardous mission so far from the settlements were Kit Ackland, Rufus Perry, James Dunn, and John Carlin. The four rangers went a westerly course until they arrived at a point in the prairie north of where the town of Uvalde now is and then turned northwest towards the mouth of Nueces Canyon. Here the events ensued and this is the story.

A Beautiful Flower In Life's Garden

Account of Alice Ewing and the Scotch branch of the Ewing family who settled on Dry Fork and the Guadalupe River but later moved to San Antonio. This is excellent genealogy of Clan Ewing, and the old Scotch Covenanter lines.

Death Of Maximilian Solved A Problem

The death of Maximilian, the Emperor of Mexico, before a firing squad at Queretero on June 19, 1867, solved a problem that nearly caused our intervention into Mexico against the French. Here is the story.

Creed Taylor was born in Tennessee in 1820, on the 10th of April. His father, Josiah Taylor, was born and raised in Virginia, in James County, on the James River, and was related to Gen. Zachary Taylor.

Rev George Webb Slaughter, is a name familiar to all pioneer Texans. Cattleman, preacher, doctor and soldier, he served his state well in every capacity and made a name for himself worthy to be remembered by his descendants. He was born in Mississippi in 1811. His father was a Virginian who fought in the war of 1812 under Jackson at New Orleans. In 1829 he migrated with his family to Texas. crossed the Sabine River and settled in the Mexican State of Coahuila. From this point, his courage, faith and fortitude made him a prominent pioneer Texan - here is his story.

SOME NAMES OF TEXAS TOWNS.

The names of some Texas towns along the Texas & Pacific railroad are rather significant. Mention is made of Boracho * Midland * Coahoma * Toyah' * Alecto * Bennetts * Benbrooks * Strawn * Ranger * Quito * Abilene