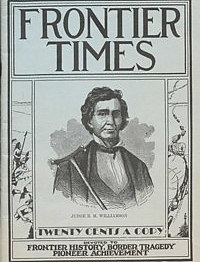 Among the early lawyers in Texas R. M. (Three-Legged Willie) Williamson was without doubt the most outstanding, and in many ways proved himself a man of noble and generous impulses. Robert M. Williamson was born in Georgia in 1806. When he was fifteen years old he was attacked with a disease known as white swelling, which made him a permanent cripple and rendered it necessary for him to wear a wooden leg, which gave him his common sobriquet "Three Legged Willie." He came to Texas in 1826 or 1827, and located at San Felipe, engaging in the practice of law, and some time later became an Alcalde, or Judge. In 1835 he commanded a company in a campaign against the Indians, and was one of the Committee of Safety at Bastrop, where he then lived. He was in the General Consultation that same year. In 1836, after Texas had won her independence he became judge of the third district of the Republic. In 1840 he was elected to the Texas Congress, and was re-elected to represent Washington county until annexation; and for several years he represented the same county in the State Senate after annexation. Of all the popular leaders during the period of the Texas Revolution none wielded a more potential influence than R. M. Williamson. This is his story.

John Simpson Chisum and his Kin

Account details extensive genealogical and historical data on the John Chisum family line of Texas. In 1873 he moved his ranch and located at South Springs, five miles southeasterly from the present town of Roswell, New Mexico, and it was here that he became the cattle king of the Southwest, with a territory that reached from the Texas line to the mountains near Old Lincoln. Here he reigned as a feudal lord. He was forced, for protection, to employ many fighting men, and in the year 1878 was dragged into the Lincoln County War. In the West he was known as "Honest John Chisum."

SONGS OF THE OPEN RANGE

The Seminole Indian Scouts On The Border

Very extensive and detailed account describing the use of the enigmatic Seminoles as Scouts for the United States Army.

"The Seminoles, before the removal of the main body from Florida to Indian Territory, consisted chiefly of descendants of Muscogee (Creeks) from the lower Creek towns, with a considerable number of refugees from the Tipper Creeks-together with remnants of Yamasee-and other conquered tribes and a large negro element from runaway slaves."

The Second Dragoons were ordered to Texas and New Mexico after the Mexican War, and the War Department tried to get them back to their former standard of efficiency and again make them appear like the crack regiment they really were. They were ordered by' the Secretary of War to wear their hair "cropped," their whiskers not to extend lower than the tip of the ear; mustaches could only be worn by cavalry regiments, and all officers were enjoined to observe and enforce these army regulations. Their duties in Texas were to protect the settlements from the Comanches, Apaches, and hostile Indians of other tribes and to preserve our neutrality from violation by evil disposed white men or filibusters along the Mexican border. This is the story.

Frontier Times Museum Will Be Enlarged