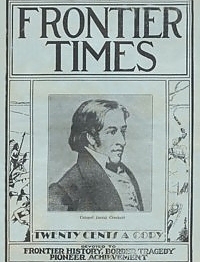 Colonel David Crockett was one of the most remarkable men of the times in which he lived. Born in humble life, August 17, 1786, but gifted with a strong will, an indomitable courage and unremitting perseverance, as well as an aptitude for accumulating information from his involvement with men of superior education, he rose to posts of high honor and distinction. His talent for original humor caused his sayings to be admired and quoted, reported in newspapers, and received with applause throughout America and Europe. He ended his glorious career as true Texas hero - here is a brief account of his story.

Account of John McBee, of Kansas who resigned his office to lead the troops of the soldiers who went to war to rescue two girls from Indians. Events center around the Solomon and Republican River raids of the hostile Cheyenne, Arapaho, Kiowa, and Comanche Indians in the Summer of 1868. The massacres were horrible, but it was the kidnapping, captivity and final rescue of the two girls—Mrs. Morgan, a 19 year old bride, and Miss White, who was barely 17—which in turn stirred the State to fury, held it in anxious suspense for month's and finally lifted it to rejoicing. Here is the story.

Was Born In The Lone Star Republic

Account of E. H. Alexander, a native Texan and a former Llano county official, who was born in Columbus on October 27, 1845, while Texas was a Republic. He was born in Columbus and married there on April 15, 1869; and in 1878, be and his wife moved to Burnet. They went to Llano county in 1885 and located on Miller's Creek. Three years later they moved to the town of Llano. In 1889, they moved into the house in which Mr. Alexander now resides with his daughter, Mrs. E. J. Dalrymple. Mrs. Alexander's death occurred there in 1933. Here are the details of his life.

Excellent and extensive account of the life of Dr. Robert T. Hill, longtime professor of geology in the University of Texas at Austin. He started out as a printer's assistant, and because of his great love of the Texas outdoors in general and of geology in particular he eventually graduated from Cornell University and entered the U. S. Geological Survey where he was the only Southerner on the landscape. It caused a great sensation in the Survey among the old regulars, that a stripling cowboy knew anything, but young Hill fumed and worked. He graduated with honors and was highly recommended for the post at Austin. Here is the story. Includes photo of his old lecture hall and of notes from which he would lecture.

Excellent and detailed account of the origins, history and culture of the Navajo Tribe and of the Navajo Indian Police Patrol. Account includes old photo of the patrol.

Chased By A Band Of Indians

By Col. Richard I. Dodge.

Col. Dodge recounts in this article the terror of being pursued by the stealthy and notorious Comanches. He mentions, among other occasion, once when a party of Comanches passed near the town of Castroville, Texas, committing various thefts and depredations, finally murdering a whole family of Germans. He was ordered with twenty-five soldiers to pursue and punish them. For more than four weeks he followed the devious windings of the trail, and finally overtook and surprised them in their camp, killing some, dispersing the others, and capturing all their horses, saddles and equipment. This was so severe a blow that the Comanches almost entirely ceased to frequent that portion of country, and in a very few years after that military post was abandoned as no longer necessary.

Further Mentions: Fort Lincoln * Castroville, Texas * a party of Lipans * the headwaters of the Perdinales * the Guadalupe mountains, by the Bandera Pass * the Medina river

The Hoodoo War In Mason County

Account of Scott Cooley and his band who stirred up trouble in Mason county, resulting in the hangings and shootings in the so-called "Mason County Hoo Doo War," which was really the outgrowth of wholesale cattle stealing and other acts of lawlessness. At that period great cattle drives "up the trail" to Kansas were in order, and there was much complaint that cattle belonging to ranchmen were taken by the men moving the herds and not accounted for to the owners. There were many disputes and charges of theft, and the civil authorities did their best to adjust matters, which really culminated in open warfare. This is the story.

Account concerns the first Masonic funeral in California in the year of 1849, when the eyes of all the world were turned on the famous gold rush to the Pacific Coast, and also of the lifeless body of a man discovered in the bay of San Francisco. Upon examination of the body, they discovered the most spectacular array of Masonic emblems that the imagination and ingenuity of man could tattoo upon the human body. There was hardly a square inch of skin, except on his face, which was not decorated with striking emblems of the order of which he was, no doubt, an ardent member

Building A Major Museum In Bandera

The Gila Monster Of Arizona

The Gila Monster is not a monster in size. It is a fat, sluggish lizzard, only about 14 to 18 inches in length, and is repulsive looking, yet it is also a beautiful reptile, its skin of orange and black coat of bead scales suggesting in pattern some rare Navajo Indian rug. It is said to be the only poisonous lizzard on the North American Continent, and is found exclusively in Arizona, the name being derived from the Gila river, because it is most common on the desert drained by the Gila river.

Mentions: a gentleman who lived at Safford, Arizona, who was a Delegate to Congress from that territory in 1900; he was bitten by a pet Gila monster * Colonel P. S. McGeeney, of San Antonio, Texas * Richard M. Farthingay * Mr. James

Was The Quivira In Central Kansas?