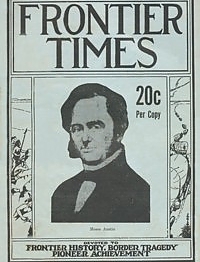 Moses Austin Was A Real Pioneer

When Moses Austin came to Texas in 1820, to seek a colonization grant, little did he dream of the far-reaching results of the tedious trip of more than eight hundred miles he made on horse-back through a totally unsettled and wilderness country, nor could he fore-see the destiny of the great common-wealth that was to develop, directly as the outcome of that hazardous trip. Moses Austin did not live to even see his colonization scheme put into operation, for on the return trip to Missouri he was stricken with pneumonia, and died at the home of his son-in-law, James Bryan, June 10, 1821, in the 57th year of his age. His work was then taken up by his illustrious son, Stephen Fuller Austin, and successfully carried forward. So began the great state of Texas. Here is his story.

Two Daughters Of The Frontier

Account of two sisters of Mineral Wells in Palo Pinto county, Mrs. Jane Harris and Mrs. Robert S. Dalton, who were both born in Palo Pinto county, on the Slaughter Valley ranch, in a pioneer double log cabin. Mrs. Harris was born in 1858, and Mrs Dalton in 1860. Their father was Rev. G. W. Slaughter, the first Baptist preacher to settle in this county, a pioneer circuit rider, known and respected not only in his home county, but over the entire frontier at that time. He was also the trusted lieutenant of General Sam Houston, and carried his last message to Travis, Crockett and Bowie in the Alamo.

Account and reminiscences of William James Keneson of Fannett, Texas, who speaks among other things, of duty in the ranks of the Federal army under General Ulysses Grant during the Civil War; months of fighting the Indians in the Dakotas; a desertion from the ranks of the Blue; trips up the old cattle trails from Texas; participation in the biggest buffalo hunt the nation has ever seen; his capture by Jesse and Frank James during the Civil War; years of service as a wild cowboy in the early days of the west, and his hauling of the corner stone for the capitol in Austin.

Further Mentions: Mr. Keneson was born in New York and reared around Chicago, later moving to Iowa, Missouri, and then to Kansas, where as a 15-year-old boy he enlisted in the ranks of the Union army when the Civil War broke out * Jesse and Frank James * Harrisonville * Independence, Kansas * the Chisholm Trail, the Slaughter Trail, and the old Santa Fe Trail * a horse ranch in Burnet county * Marble Falls * Osawatomie, Kansas * John Brown

This is the first part of a serial account of two daring adventurers who colorfully describe their exciting and sometimes humorous happenings on their trip through the wilds and wiles of Texas during the 1870's.

Here is the first hand the tale of the famous Pack-saddle Mountain battle with Apaches, which occurred in Llano county, Texas August 3, 1873. E. D. Harrington re-calls vivid memories of the historic fight in which he was an active participant.

Building A Major Museum In Bandera

Very extensive and detailed account of many of the major trails of Frontier Texas used by Anglos as opposed to the many Indian and Mexican trails already in use on the frontier.

The Fourth Cavalry In Texas

After the capture of Macon, Georgia, on April 20, 1865, the Fourth United States Cavalry remained there until late in November, when it was ordered to Texas, where ten companies were concentrated at San Antonio and two companies were sent to the Rio Grande. In the fall of 1866 companies were sent to Camp Verde, old Fort Martin Scott at Fredericksburg, and to Fort Mason, Mason county, Texas. In 1867 old Fort Chadbourne, about sixty miles north of San Angelo, was reoccupied by four companies of the Fourth Cavalry. In May, 1873, the Fourth Cavalry was concentrated at Forts Clark and Duncan under brevet Brigadier General Ranald Slidell Mackenzie. In August, 1874, eight companies of the Fourth' Cavalry, A, D, E, F, H, I, K, and L, commanded by Captains M. B. McLaughlen, E. B. Beaumont, Sebastian Gunther, Peter M. Boehm, Theo. J. Wirt, Edward Miles Heyl, left Fort McKavett and proceeded to Fort Concho, Texas, and along the the North Concho river to the First Fork of the Brazos, close to the Staked Plains. Here they established a supply camp on September 2, and left it under the command of Colonel Thomas Anderson, while the Cavalry, with an escort of the Eighth Infantry for the wagon train, scouted along the heads of the Brazos, Pecos, and Red Rivers. Many fierce engagements with Comanches followed. The regiment then took post in Indian Territory in 1875, and did not again return to Texas. Here is the story.