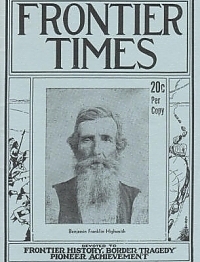 An Indian Massacre in Montague County

Account of brutal Indian attack that occurred in 1870 on the west prong of Denton Creek, in Montague county, Texas, about six miles southwest of the town of Montague.

Account was taken by the author from a book rarely accessible to those outside the Military Service. The account describes Mac­kenzie during his Civil war battles and then goes on to detail his battles with marauding Comanches, Kiowas, and Cheyennes, whose main camp he attacked, Sept. 28, killing and capturing nearly 2,000 horses. In 1875, from his headquarters at Fort Sill, I. T., Mackenzie, by his energetic measures, effected a complete change in the disordered condition of Indian affairs. His career was one of the most brilliant in the annals of the American army.

Story of the old Mason Brass Band, of from six to ten pieces, which provided music on gala occasions for a vast scope of country northwest of San Antonio. Includes old photo of the band.

Account draws from the memory of Mrs. Georgina Kendall Fellowes, who recalls being a passenger on the first railroad line to operate west of the Mississippi River, the Buffalo Bayou, Brazos and Colorado Railroad which ran between Richmond,and Har­risburg, Texas, before the Civil War. She specifically describes the 33-mile ride on the train in 1858 when Mrs. Fellowes, born in France on May 29, 1850, accompanied her parents to New Orleans from their ranch near New Braunfels.

This article further relates to the foregoing article and supplies more important history of George Wilkins Kendall who first came to Texas from Louisiana in 1840 for his health. He was a journalist and eventually fell in with Thomas Falconer, with whom he joined as guests of the Republic of Texas upon the Santa Fe expedition of the same year sent out by President Lamar. He was later captured in New Mexico at San Miguel without ever having seen Santa Fe. The members were carried prisoners to the City of Mexico. Later, after having retuned from the Mexico prison, he located a sheep ranch near Sisterdale in the beautiful hill country of what is now Kendall county. There he remained for the rest of his life. This is an excellent account of his family and history of the area.

Account describes events that occurred in 1884, when the cattlemen of Texas held a convention in Austin. At a certain time, and without warning Ben Thompson suddenly surprised the cattlemen by entering the banquet hall, and with drawn gun began to knock things hither and thither from the table. He stampeded the unarmed visitors and broke up the banquet. The Sun newspaper then printed an article critical of Thompson, which triggered then a further and dangerous altercation between the badman and the editor of the newspaper. Here is the account.

Excellent history of Ben Highsmith, the son of Ahijah M. and Deborah Turner Highsmith, a descendant of a long line of Indian scouts and rangers. Highsmith served in the Army of Texas 1835—1836, then became a Texas Ranger under Capt. Jack Hays, was a member of the Somervell Expedition, 1842, etc, etc. here is his story.

Here is the account of what became known as the Cortina campaign when a Mexican named Juan Cortina, who claimed he had been wronged by the citizens of Brownsville, TX and so crossed from the Mexican side of the Rio Grande in the autumn of 1859 with a body of armed men recruited from both sides of the river estimated from 600 to 1,500 strong. This unlawful force committed many depredations and killed several Americans. It was reported that Cortina had captured Brownsville, and that he had assumed a formidable and threatening attitude at various places between the Nueces and the Rio Grande, The whole frontier and, in fact, the entire State was very much excited. General David E. Twiggs assembled a force at Brownsville under the command of Major Samuel Peter Heintzelman, and thus the campaign began. This article presents the entire account in detail.

Account of the scourge of smallpox which decimated the Indian tribes of the region now encompassed by northern Montana, the Canadian area just north of the Montana border, and North Dakota, during the summer of 1837. The death toll from the epidemic probably reached a total of 10,000. Here is the sad account of that event.