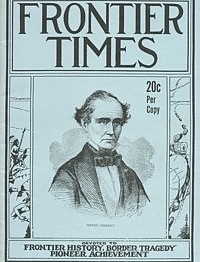 Account of the Battle of San Jacinto, which won for Texas her independence from Mexican rule. This was one of the most remarkable battles in the history of the world, because or the fact that it lasted only about twenty minutes, resulting in a crushing defeat for Santa Anna and his 1,600 Mexican troops, of whom more than 700 were killed and about 800 captured. The Texan troops numbered only 783 men, poorly equipped. One of the outstanding heroes of that memorable engagement was General Sidney Sherman, who led a small squadron of cavalry in the attack on the Mexicans. This is his story.

Drank The Blood Of A Lobo Wolf

Account of Samuel Dunn Houston, (includes old photo) a nephew of Gen. Sam Houston, who lived in San Antonio for more than forty years, who for many years lived life as a cowboy, and made several trips "up the trail" to Kansas and Nebraska. He was an expert woodworker, and had many thrilling experiences during those early days of the cattle industry, some of which he related in this story of the man's life.

A Northerner's Story Of Twiggs' Surrender

With the usurpation of power being enacted by the Northern aggressionists, and Civil War imminent, Texas determined that it would have need to seize control of all Federal military armaments and troops for the protection of its own borders and to join with the Secessionist freedom cause. General Twigg (a Georgian, with assumed southern sympathies) would need to yield the military control to the State of Texas. This is a Northerners account of how those thorny events played out. It is a lengthy and detailed account.

At a peace council held in October, 1867, on the Arkansas river, in the present state of Oklahoma, between United States peace commissioners and the principal chiefs of four Indian tribes, Satanta, principal chief of the Kiowas, said:

"It has made me glad to meet you, the commissioners of the Great Father. You, no doubt, are tired of much talk of our people. Many of them have put themselves forward and filled you with their sayings. I have kept back and said nothing—not that I did not consider myself the principal chief of the Kiowa nation—but others, younger, desired to talk, and I left it to them. Before leaving, however—as I now intend to go—I come to say that the Kiowas and Comanche: have made with you a peace, and they intend to stick to it. If it brings prosperity to us, of course we will like it better. If it brings poverty and adversity we will not abandon it, because it is our contract, and it will stand…"

So begins the sayings of this warrior-chief. The entire speech is contained in this great article. In November, 1874, Satanta was recaptured, and placed in the penitentiary at Huntsville, where he finally ended his life by jumping or throwing himself from an upper window of the prison.

A New Mexico Cowboy On The Pecos

While this is more or less personal, still it is in a way history of the old cattle days never to return. The writer was on a cattle ranch near Colorado City, Texas, in the spring of 1885, and in the winter and early spring of that year a number of cattle drifted across the plains to the Pecos river from the head of the Conchos and Colorado rivers. At that time there were very few ranches or cattle on the then called Llano Estacado, or Staked Plains. Several outfits, two hundred cowboys or more, were sent across to bring the cattle back, and this was my first knowledge of the Pecos. Then later in the year the C A Bar outfit, which I was with, began to move cattle to New Mexico, where they had bought and established a ranch on the Rio Penasco, a tributary of the Pecos river. The first of these cattle were shipped to Toyah, Texas, and trailed from there, but great numbers were driven across the plains, following along the line of the then new Texas & Pacific railroad.

So begins the personal recollections of Mr. Hinkle and his days in Texas. This lengthy and detailed account also contains excellent early cattle industry and eastern New Mexico history.

By William B. Goolsby

The old fort or castle of San Carlos commonly known as Perote fort, or Perote prison, in the state of Vera Cruz, Mexico, is the setting of the final chapter of three of the most disastrous episodes in the history of Texas. This old prison was the heinous place where some of the most ill-fated sons of Texas spent sad, weary and dejected years. The three disastrous expeditions organized during the formative days of Texas which ended by their members spending time in the prison at Perote were; the Santa Fe expedition, the Surrender of San Antonio to General Woll, and the pathetic attempt of a handful of men to capture Mexico and their defeat and surrender at the town of Mier, on the Mexican border. This article offers the salient facts.

Arrest Of The Balcones Stage Robbers

One of the outstanding citizens of the Hill Country of Texas in the early 1880's was Hal Gosling, a prominent young lawyer and newspaper man, who was the founder and editor of the Castroville Quill, a live weekly newspaper. On December 20, 1880, Mr. Gosling was happily married to Miss Nellie Mayes, a charming young lady of that section, and in 1884 he was appointed Deputy United States Marshal. He sold his newspaper to enter upon the duties of that office, which he discharged with much credit and ability, and lost his life while conveying a couple of prisoners to the penitentiary. This is the sad story.