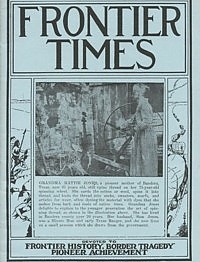 The Lofty Courage Of A Pioneer Mother

Account of Mr. and Mrs. John Burleson, who lived in San Angelo, Texas, and relates in this article their many experiences on the frontier.

Logan Van Deveer Was A Hero

This is the vivid story of Logan Van Deveer, at one tme owner of the townsite of the city of Austin, and who rescued from the Indians the fairest belle of San Antonio, whom he afterward married. Van Deveer was a hero of San Jacinto's bloody battlefield. The story also tells of a terrific fight with Indians in Burnet county. It is a story for all Texans to know, a story historically authentic and taken from historical records.

Very detailed description and account of the old historic Fort Duncan, near the center of Eagle Pass, Maverick county, Texas.

Looking Back From Eighty-Three Years

Perspectives of a good man, Uncle Bill Kellis, long-time editor and owner of the Sterling City (Texas) NewsRecord. a hearty Texan who lived a good life and in this article, recounts the joys, struggles, heartaches.

How The Indians Traveled

The Indian travels by instinct. Under no other hypothesis can we understand the marvelous journeys prolonged to months, and even years, made by individual Indians; or the ease or certainty with which, when tired of wandering, they made their way over the "trackless wastes" of the broad continent to the spot which they recognize as home. With no knowledge of astronomy, or geography, or of the compass, the Indian performs feats of traveling for which a white man requires all three. To him there is no north, no south. This article, written in 1892 is far closer to the perspectives and observations of the pioneers as they marveled at this unique phenomena of the Indian's travel instincts. The account recites incredible and marvelous journeys made by Indians.

Mentions: Brady's Creek in Texas * Doctor Matthews, in his "Ethnology of the Hidatsa Indians," * the Hidatsa village * the Delawares * John Connor * Fort Martin Scott, in Texas * Black Beaver, the friend and guide of General (then Captain) Marcy * the Uncompagre *

Fort McKavett, frontier outpost in Menard county near the Schleicher county line, established in 1852, abandoned by order of General Twiggs in 1860, was reoccupied by troops on April 1, 1868, continuing the drama that marked the early developments in the building of a West Texas empire. Here is the story of the old fort.

This article is a speech made by Hon. Maury Maverick of Texas, in Congress on Monday, March 28th, 1938. It recites the bitter story of the Perote prisoners, taken in San Antonio by General Woll in 1842. This speech was taken from the Congressional Record.

In the fall of 1858, while stationed at Fort Mason, Texas, I was detailed to go alone and carry dispatches of great importance to General Albert Sidney Johnston, who with his command, was supposed to be either at Fort Leavenworth or on the march from that post to Utah. I never learned just why a dispatch for that General should have to come from Washington to San Antonio and thence via Ft. Mason, and across a vast stretch of intervening wilderness, infested by hostile tribes of Indians, in order to reach General Johnston. And I never could tell why I was chosen to perform this Herculean and highly dangerous task. When an important duty was to be performed, an undertaking that required courage, endurance and experience, it was usually the custom to call for volunteers, but in this instance this custom was ignored, and I was ordered to prepare for the journey. The commandant of the post gave me implicit instructions and said he would send an escort with me if I so requested, but I preferred going alone, since one man, well mounted, stood a better showing to get through the wilderness unobserved than a small body of men. So begins the account of this dangerous mission.

Uncle Ed Cosper is an old Texas frontiersman, who lived also at Duncan, Arizona. In this article, he offers a sketch of some of his own experiences, in Texas and in Arizona.