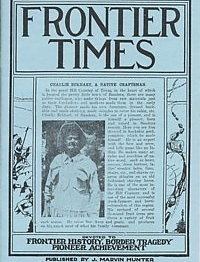 Account of Mrs. Egbert L. Viele, wife of General, Viele and her historical description of life and experiences in early Brownsville, TX and of old Fort Brown. Includes old sketch of Fort Brown in 1818.

Brief account of Ulysses Vasbinder, trail boss and hero of the great days of the 1870s and 1860s cattle business of the Southwest.

Unless able to rival the fasting powers of Dr. Tanner, a vegetarian would have little chance of a `survival' among the Indians. In their natural condition the sole diet of the Plains Indians for at least nine months in the year is the flesh of animals, and though they prefer it cooked, they are by no means averse to it raw.

In camp the duty of cooking is usually devolved on the oldest. or least, favored squaw. There is no variety of style, no French methods, no necessity for titillating appetites already over keen. A pot full of meat and water is put on the fire and boiled, but there is no definite point in the cooking process when the food is "done." If an Indian is especially hungry, he may commence on the contents of the pot by the time they are fairly warm.

Generally, however, it is allowed to boil until the head of the lodge intimates that he is hungry, when the pot is set off the fire; and each, crowding around, helps him or herself with knives or fingers, sometimes with a huge stick, cut in the shape of a ladle. Among the more advanced Indian tribes tin plates are now frequently used and, sitting around on the beds or ground, the diners are helped successively by the old squaw who does the cooking.

So begins this excellent account of the culinary characteristics of the Indians of the Plains.

Account of the origins and history of the Birch stages, which preceded and outlasted the John Butterfield lines. The first of these stages left Old Town San Diego July 9, 1857, with the first overland stage mail ever to he sent over the San Diego, San Antonio and New Orleans route. Here is the story.

Came To Texas In Early Times

Personal recollections of Sallie H. McClintock who was born in 1848, the daughter of a well to do Pennsylvania farmer, who, due to poor health was advised him to move to the warmer climate of Texas. The family settle in the region of Huntsville TX in its earliest days.

In the year 1867 nearly all the people who lived in Montague county, Texas, were forced to leave their homes and go east on account of Indian depredations. A few of the settlers decided to remain and take care of the property which they had accumulated. Among the number who stayed was the family of Stephen Roberts, and a German by the name of Khenan and his family. Roberts lived about four miles west of where the town of Forestburg is now located, and his family consisted of himself and about ten or twelve boys. These were the victims of the brutal assault recorded in this graphic story.

Mentions: Mr. Khenan, the German farmer above mentioned, had, in an early day left the Fatherland and came to the new world and east his lot among the people of Montague county, and selected his home a half mile south of Stephen Roberts. His family consisted of himself, wife and three small children. Mrs. Paschall, a widow with two small children, lived with the Khenan family * the family of Robert Green * James Chisum * Clear Creek * Spring Station * the Upper Cross Timbers * William McConnell * Brad Sanders, Tom Sanders * the McDonalds, who lived still further west in the Cross Timbers * Rufus Roberts * Creed Roberts * Mrs. Paschall

Sam Moore, as a child, watched the Packsaddle Mountain fight in Llano county, drove many herds up the trail to market, killed thousands of buffalo, brushed elbows with outlaws and gentlemen, battled with red men, was in a stagecoach holdup, and lived the adventurous life of a true frontier Texan. Here is his story.