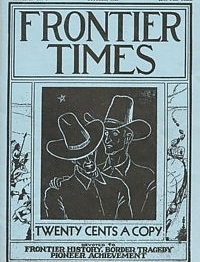 The Killing Of Josephus Browning Avenged

Eyewitness account of events surrounding the scalping murder and revenge of Josephus Browning near the middle of June, 1860. The revenge of the murder of the good man, Browning was known as the Paint Creek Fight, and considering the number of whites, and that no one of the white men was seriously injured, makes this by long odds the most successful Indian fight ever fought on the northern frontier of Texas.

Account of one of Llano county's oldest pioneer characters, M. H. Tow, also known as Uncle Mun, who was born in Fannin county, August 18, 1851. About three years later, his parents, the late Uncle William and Aunt Polly Tow, moved to this section using horses and a wagon as their means of travel. They forded the Colorado river and settled in a valley on the Llano side in 1854. Here is his story.

Guns That Moved The Frontier West

The Mississippi River marks the boundary between that part of this country conquered by the long rifle and that conquered by the Colt revolver. This is an account of the history and development of the early firearms that won the frontier.

Mentions: Rock Island Arsenal * Chinese wall pieces that come very near the beginnings of firearms * These Chinese guns were designed to be held over a wall—usually secured there by a bracket of some sort—and fired in the general direction of the enemy. Nobody tried to take that jolt on the shoulder. They have only one refinement over the first hand gun ever built—they are flintlocks. * the Kentucky rifle, so called because it was in demand by the Kentucky frontiersmen * Daniel Morgan * French Charleville * .69 caliber Springfield musket * Springfield Armory * .58 caliber, Model of 1842 of which Longfellow wrote when he visited Springfield Armory * Hall's breechloading musket * Harper's Ferry Arsenal * the Maynard pruner * Col. Hiram Berdan * Burnside, who commanded the army of the Potomac at Fredericksburg * the Colts revolver * the Allin, whose inventer, the master armorer at Springfield * The first breechloading Springfield rifle was the model of 1866 * Krag Jorgenson * the English Enfield * Capt. Sam Walker of the Texas Rangers * The Colt Automatic Pistol, caliber .45 *

Fred Mosebach recalls some major crimes and incidents in the history of old San Antonio.

It is given to but few men to a crowd into the short span of thirty-four years a record so replete with outstanding service to their fellow citizens and their government as is evidenced by the glorious chronicle of the life story of Isaac Van Zandt. This scion of a proud old Dutch family was born in Franklin county, Tennessee, the grandson of a veteran of the Revolutionary War. While young he married Francis Cook Lipscomb, a cousin of Abner L. Linscomb, afterwards to become a. member of the Supreme Court of Texas, and moved with his small family to Harrison county, Texas, in 1839. Here is his story.

Historic Fort Clark is situated in Kinney County, Texas, near Brackettville, the county seat, 140 miles west of San Antonio, ten wiles from Spofford Junction, Southern Pacific Railway, and twenty miles from the Rio Grande. The site, when chosen early in 1852, was deemed strategic because, being over sixty feet higher than Las Floras Spring, a few hundred yards away, a fine view of the almost limitless mesquite plains is here commanded. Las Moras Mountain is a conspicuous landmark as one looks toward the northeast. The post was established June 15, 1852. Here is the story.

The Irishman In Early Texas

Regardless of the intense pride which all of Irish descent justly feel in the noteworthy contributions which their ancestors made to the cause of Texas Independence they do not in any manner nor to any degree underrate the accomplishments in the same direction of those of other lineage, and they are delighted to say with that great American Admiral Schley, "There is glory enough for us all."

And in that spirit our legislators adopted as our State motto that typically Irish word "friendship," and regardless of where you were born, your politics or religion, if you love us as we do you, if you are willing to work with us for a better government and for a higher standard of manhood and womanhood, we greet you as a lover of Texas where there is no "bloody law agin' the wearing of the green!"

Inasmuch as the conduct of the early Irish in Texas was so exemplary and so unselfish and their espousal of the cause of independence so spontaneous and their support thereof so generous and unstinted, it is but meet and proper that due recognition of the value of their citizenship be made by all men and that posterity be adjured to emulate their noble and heroic example. The Irish have fought, sung, laughed, shouted, prayed, and served their way across the pages of Texas history; they have carried the burden of others' woes; they have dispensed early; they have counseled amity and toleration and have striven for stability in society and government. And now after a century of devotion to this land of freedom and equal opportunity the record of their service and achievement is seen even as the shadow of the eagle in flight rests upon plain, sea shore, and mountain side.

So begins this excellent and lengthy account of the role that the noble Irish settlers, frontiersmen and statesmen played in the forging of early Texas history.

While Gen. Sam Houston was serving his second term as President of the Republic of Texas, and the seat of government was temporarily at the town of Washington on the Brazos, it occurred to him that by marking out a dividing line between territory to be occupied by Indians and that in which white people might make their homes, and establishing along that line trading posts, he might control the wild men to a great extent and save the lives of many people. Joseph C. Eldridge, a gentleman of education, large experience and undoubted courage, was then Commissioner of Indian affairs for the Republic. President Houston, after frequent interviews with them, gave three Delaware Indians, Jim Shaw, John Conner and Jim Secondeye, reason to believe they would be appointed Commissioners to negotiate with the wild tribes such a treaty as was desired, but, on second thought decided in appoint Commissioner Eldridge for that hazardous mission—be to he accompanied by two or three while men and by the Delawares named and a few Indians of other tribes. Unfortunately though he neglected to disabuse the minds of the Delawares of the impression they had gained that they were to he the commissioners, and this failure caused trouble. But there were many other challenges to the dangerous mission. This story records the details.

Old reproduction of a photograph made by the old time photographer, N. H. Rose, at Sonora, Texas, in 1898. The boys in the picture: Cal Word, Austin Rountree, Walter Wyatt, Mason Rountree, and Charlie Erskine.

Account of Mrs. L. A. Scott, whose maternal grandfather, R. R. Royall, came to Texas by way of the Ohio and Mississippi rivers, Gulf of Mexico and Matagorda Bay, where he landed in a terrible storm In the year 1832 my. One boat, all household goods and farming implements were lost. All livestock and passengers were saved. Eleven families had come by boat from near Tuscumbia, Alabama, to settle in Austin's Colony. Many experiences related at this period of Texas history comprise her childhood memories.

A Cowboy's Prayer By Charles B. Clark

I thank You, Lord, that I am placed so well;
That You have made my freedom so complete ;
That. I'm no slave of whistle, clock or bell,
Or weakeyed prisoner of wall and street.
Just let me live my life as I've begun And give me work that's open to the sky;
Make me a pardner of the wind and sun
And I won't ask a life that's soft or high.
Let me be easy on that man that's down,
And make me square and generous with all…(etc, etc)