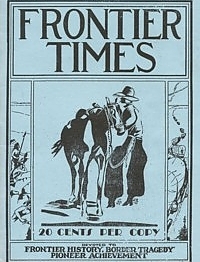 Account of Thomas Winslow Turner, a direct descendant of Captain Miles Standish, of the Plymouth Colony, and a Winslow Turner, whose name figures in the early settlement of Texas. This story includes his memoirs of the early days, and the excitement of settling a new country. Born at Old Refugio, Texas, Dec. 11, 1859, Mr. Turner was orphaned at ten. He was befriended by the John Welder family, German ranchers located near Corpus Christi. He made his home with them until he was fourteen and then "hit the Kansas trail" with a herd of cattle from near White Point, Texas, to Wichita and Baxter Springs, Kansas. Here is his story.

Brief account of Captain John E. (Jack) Elgin, of Austin who earned his title of Captain by commanding the Waco Grays, a military company active in the decade of reconstruction following the Civil War to check lawlessness and prevent Indian depredations. At an early age Captain Elgin moved to Waco where he was graduated from Waco University, now Baylor University, as an attorney.

(Editor's Note.—Iu the September, 1938 issue of Frontier Times appeared the story of George Lord, a Mier prisoner, which our readers found very interesting. John Rufus Alexander was also a member of the Mier Expedition, and gave the account of his escape to John Warren Hunter, who wrote it out, and we here give it as related by Mr. Alexander.

Brief account of the experiences of T. U. Taylor Dean Emeritus of the Engineering Department of the University of Texas who served on the forty acres which comprise the University property in Austin, and be has seen that great institution grow to be the greatest in the South.

MAN OF BANDERA, PASSES ON

Obit. Of Joseph William Short, for about a half century a prominent cattle man and banker of Bandera county. He was born in Karnes county, Texas, November 11, 1863. His parents came from Kentucky to Texas in an early day, and settled in Karnes county, later moving to Seguin, where Joe Short was reared. On December 21, 1893, he was happily married, at Henderson, Kentucky, to Miss Margaret Clay, and brought his bride to Bandera. Old photo of Mr. Short included.

Account of three noble Texans: Ben McCulloch, Henry E. McCulloch and John Ireland—all of whom valiantly and gloriously served Texas in peace and in war, each of whom were distinguished for their wisdom, devotion to the common good, and fidelity to a high and noble purpose in life.

Account of Mrs. Sallie Reynolds Matthews, wife of Judge J. A. Matthews, and daughter of one of the earliest pioneer families of the regions of Albany, TX.

The Ideals Of The Texans

This story on "The Ideals of the Texans," by R. L. Doss student of Texas A. & M. College, was awarded fourth prize by the Battle of Flowers Association of San Antonio, q

Curley Hatcher Was A Daring Ranger

During the years of 1873 and 1574 there were troublous times on the Texas border. The vanguard of civilization that had then begun to plant its posts in what is now Central West Texas were heroes of iron mold. Such was the character of the subject of this account. Here is his story.

Brief account of B. F. Manton, who was born in Colorado county, near Fayetteville, and grew up in the early days of Texas when Indians were still a menace. When he was 15, he commenced driving cattle to Kansas.