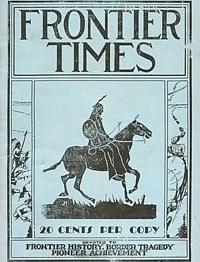 Eye-witness account of the events that occurred when Butch Cassidy and his Hole in The Wall Gang rode into Winnemucca, Nevada, on September 19, 1900, and robbed the First National Bank. The real story could only be told by the man who best knew it. Honorable Edward A. Ducker, a Justice of the Nevada Supreme Court, then a young lawyer just starting his legal career in Winnemucca. Here is his account.

The following account of the fight with Indians at Loving's Ranch that occurred in July, 1874 and was written in 1910 by R. S. Purdy of Cenemt, Oklahoma.

Account of the murder of Major Ripley Allen Arnold, 2nd U. S. Dragoons, which occurred at Fort Graham, on the Brazos river in Hill county, about midway between Waco and Fort Worth on September 6, 1853.

Early Days In The Brush Country

HERE IS SOME ESPECIALLY GOOD EARLY HISTORY AND GENEALOGY OF UVALDE, TX AND FRIO COUNTY, TX as well as surrounding areas of Dimmit, La Salle, Maverick and Zavala counties.

MAN HANGED IN 1894 AND YET LIVED TO DIE NATURAL DEATH

Account of a man who was once hanged for a murder he did not commit. Will Purvis, known throughout the nation as the man who was hanged and yet lived, passed away at a ripe old age, with his wife and eleven children at his bedside.

It was on Feb. 7, 1894, that Purvis, convicted of murdering a neighbor, Will Buckley, mounted the gallows steps at Columbia, in Marion county, Mississippi, to pay the supreme penalty. The sombre black cap was slipped over his head, and the noose set. A brief pause and then the order was given. Purvis plummeted downward, but…

An Outburst For Independence

In the life story of Empresario Hayden Edwards there is found evidence of the conflict of racial instincts between the Latin and the Anglo-Saxon, and which in later years germinated the impulses which largely produced the Texas Revolution. Here is the story.

The California Column In The Civil War

The most successful column of Western troops we have record of, during the Civil War, was the "California Column," whose existence was of tremendous stragetical value to the Union. Here is the story.