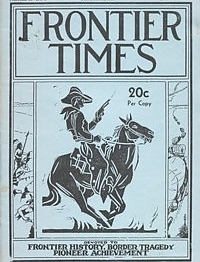 A Trail Driver In Reminiscent Mood

Account of John Tally, cowman and gentleman of Austin, a native of Hays county, Texas. He has been a cowboy, cattleman, merchant, banker, and public official. But his heart has always been in the cow trails. Here is his story.

History has failed to adequately acknowledge the debt that Texans of today owe to one who was unusually active in establishing Texas government and in defending it from its enemies. Edward Conrad was but one of a great host of people of his race who emigrated to Texas and who rose to the defense of human liberties and the establishment of a free government. His devotion and service to Texas must ever be held in the esteem of those who are now the happy residents of this great state.

Account of Captain Charles Schreiner, the Hill Country's greatest philanthropist and benefactor, who assisted many people in the counties of Kerr, Bandera, Kimble, Edwards, Real, Gillespie and Mason to a successful start in life. Captain Schreiner gave over a $1,300,000 for public benefactions in some of these counties. This account details his life and his deeds for the citizens of the Hill Country.

Brief account of Warren Hudson, who was born at Maringo, Alabama, January 15, 1842, and came to Texas by boat with his parents, landing at Old Powder Horn, an early Texas seaport. The family moved on to Prairie Lea, in Caldwell county, where they remained until the boy was 16 years old, when he went to San Saba county, where he made his home the remainder of his life, with the exception of two years he spent in New Mexico. During the early days he belonged to a company of minute men, under Captain Ledbetter of San Saba county, and Captain Moseley of Brown county, and was the last of a group of men who buried Sebe Gaines, who was the first white man killed by the Indians in San Saba county.

Account of the life and accomplishments of Dr. Robert T. Hill, of Dallas, Texas, known as the dean of Texas geologists. Dr Hill became interested in the structure of the earth while a boy apprentice on a weekly newspaper at Comanche, Texas. He spent his odd moments roaming over the hills of that region, trying to discover the reasons for the various types of outcropping rocks and soils and the nature of the terrain peculiar to that district. Although his fame today rests on his accomplishments as a scientist, he never lost interest in writing.

At first named Walnut Springs because of Walnut Branch which runs through the town of Seguin, in February, 1839, the name was changed to Seguin in honor of Colonel Juan N. Seguin who commanded the only company of soldiers at the Battle of San Jacinto that were of Spanish and Mexican descent. Seguin had its first postmaster, James Campbell, in 1839. Here is an excellent account of the origins of the city.

This account is from an old article that appeared in The Eye-Witness, a weekly newspaper published at Richland Springs, Texas. It is a funeral oration delivered by H. W. Knickerbocker, in the rear of a saloon, over the body of Riley Grannan, a gambler, who died in Rawhide, Nevada. Knickerbocker Was a member of a family famous for its ministers, but at the time of delivering the oration he made no other claim than that he was just a prospector. The funeral oration wits delivered when rough men in a rough world found they could not put into words their feelings and they asked Knickerbocker to do it for them. It is a remarkable speech.

Account of the gruesome discovery of the foul murder of four, and possible five, people found dead in the Rio Grande near Eagle Pass in 1890. The investigations led to the suspect of two San Saba county men, known as Dick Duncan and Walter Landers. Here is the story.

Some Neglected Facts In Frontier History

This is an excellent account of the formative events that led up to the historically significant "Battle of Adobe Walls", which occurred in June, 1874. This battle marked a milestone in the development of the frontier region of west Texas.

There is a doubt in the public mind as to whether the early Spaniards ever discovered a silver mine on the San Saba river, although there are rumors and traditions of such a mine, generally referred to as the "Lost Bowie Mine." This mine was supposed to have been in the vicinity of the old Mission San Saba, located on the San Saba river, just one mile above the present town of Menard. This mission was established in 1757, and according to records, was destroyed in 1790. It was restored as a. Texas Centennial project in 1937. Geologists find no surface indications that would warrant even a remote supposition that silver existed in paying quantities anywhere in the San Saba Valley. Notwithstanding all this, history and tradition attest the existence of a silver mine so often referred to by the old chroniclers as "La Mina de las Almagres," "La Mina de las Amarillas," and in later times as the "Bowie Mine." This is a detailed account of Bowie's efforts and endeavors in this area and the mine that bears his name.

Account of arch swindler, master liar, and gifted detective, Gaston B. Means, who was born in 1879 of a highly respectable and well-known North Carolina family and who died at Springfield, Mo., a prisoner of the Government, serving time for defrauding Mrs. Evelyn Walsh McLean, wealthy owner of the Hope diamond, of $104,000. This is his story.

Account of old time sheriff is L. D. Campbell of Vernon, Texas who served as a peace officer in Northwest Texas for more than thirty-six years. Gunfights were plentiful for the veteran officer, particularly in the early days of his service, but his record includes no death notch on his pistol. Many of West Texas' most dangerous characters were captured by Campbell but some surrendered without a fight. Others were subdued without serious injury. Here is his story.

The Assassination Of Pancho Villa

Account of the assassination of Francisco Villa, noted bandit chieftain of Mexico, which occurred on July 20, 1923, at Parral, Mexico. The true facts in the case were brought out in an article written by Elias L. Torres, published in El Siglo de Torreon, November 10, 1935, of which the account is a translation furnished by Dr. I. J. Bush of El Paso, Texas.