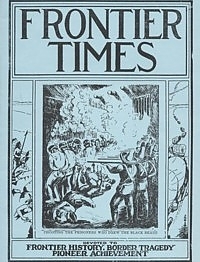 The Killing Of Cebe Goens At Salt Gap

Cebe Goens was the first white mail killed by Indians in what is now McCulloch county, Texas. This happened in May, 1861, while he and two other men were camped in Salt Gap, three or four miles north of Melvin, Texas. His body was buried near the spot where he was killed; and although considerable search has been made for his grave, the exact spot is unknown. In order to erect a suitable monument over the grave, several efforts were made to find the place, by a group of McCulloch county citizens, during the years of 1918 to 1925. The searching parties consisted, not only of McCulloch county citizens, but, also of San Saba county citizens, among whom were several persons who had frequently seen the grave in the long ago, past, including Warren Hudson, who was with the burial party in 1861. There is still a feeble hope that the grave will some day be found, and the monument erected to his memory. The circumstance of his murder by the Indians is the subject of this article.

A Winner Of The West

He soon won his way into the hearts of these hardy people. They liked his method of approach, for he always hit a town or a cow camp, on the back of a nervous, high-stepping bronc. Cowboys just naturally liked a bronc-riding preacher. Millican could not only "fork a bronc," but could rope one that had never known leather, put a saddle on him and ride him to a fare-you-well. Plunges, sunfishing and stifflegged jumps on the part of the bronc could not dislodge this hard riding preacher. After one of these performances, the cowboys would give each other a wink and say, "He's our kind, he will do." then after a supper of frijoles, bacon and black coffee, it was no trouble to preach to a circle of cowboys as they settled around the campfire. Then, too, they had respect for his style, for he did not storm and bluster at them, but in a quiet way and friendly voice told them of man's greatest friend. In all of his preaching to such men, he held neither whip nor threat, but stood on common ground and talked as man to man. Cowboys are quick to catch a false note, and in judging strangers, they are ever on the alert for a gesture of insincerity. They are seldom deceived by the superficial. They may like a lot of swashbuckling at a medicine show, but never in a church house.

This is an excellent account of a very fine man.

Excellent old photo of a group of early German pioneers at New Braunfels, in front of the old Sophienburg fort built by Prince Solms&Braunfels in 1846. The site of the old fort, we understand, is now occupied by the beautiful New Braunfels Museum building. This picture, which is thought to have bean taken some time in the 1890's, is from the famous N. H. Rose Collection of Old Time Photographs.

As of 1939 when this magazine was printed, this account of the ill-fated Mier Expedition was the most authentic and reliable obtainable on this sad epic in Texas history. It is a fairly lengthy and detailed account.

Obit. of W. T. Jackman, who lived a colorful life as a Texas pioneer, including the career as a peace officer, trail driver, and cattleman. He was born in Cloward county, Missouri, April 19th, 1851, and moved to Texas with his family in 1864, and first settled in Red River county. He was president of the Old Time Trail Drivers' Association.

Those Men Of The Mier Expedition

This account is a defense of the personal characters of the men of the Mier Expedition in 1842, and is a lengthy and detailed account of the events and conditions as led up to and resulted in that Expedition.

The Jaybird And Woodpecker War

Eye-witness account of the Jaybird and Woodpecker War which broke out in Fort Bend and Wharton counties In 1889. The war was between the pro-negro, northern carpetbagger Republicans (Woodpeckers) and the pro-white rule (Jaybirds). This detailed account is an example of the terrible conditions that prevailed in Texas during reconstruction days and following.

"Black Jack" Ketchum And His Gang

Account of the Black Jack gang in the early 1890's. The Black Jack gang originated in the Knickerbocker region, west of San Angelo, which was for several years the main rendezvous, while their operations extended through Texas, New Mexico, Arizona, Wyoming, and Montana. Includes excellent photo of the hanging of "Black Jack" Ketchum at Clayton, New Mexico, April 26, 1901. Also includes photo of the "Wild Bunch of Robbers' Roost." Showing Will Carver, Harry Longabaugh, Kid Currey, Ben Kilpatrick, Butch Cassidy. The photo was taken in Fort Worth, Texas, in 1901, shortly after the Winnemucca Bank robbery. Also includes photo of Ben Kilpatrick and Ole Beck, Killed While Robbing Train.