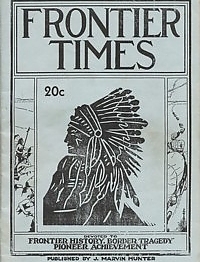 When one thinks of the pioneer days of Texas he visualizes the rough dress of the frontiersman, the war paint of the Comanche, or the picturesque garb of the cowboy. The glittering habiliments of nobility, the pomp and ceremony of European courts, banquets where the finest of wines and champagne flowed freely, would seem strangely out of place. But, in the midst of a virgin territory, the pomp and ceremony of a European court held full sway for a short time on the banks of the Comal River where Prince Solms-Braunfels reigned. Prince Solms was an easygoing likeable chap, but he could not forego the life of a nobleman, even in the wilderness. Here is the story. Includes old photograph of Old Sophienberg Fort, built by Prince Solms in 1845.

Among names of the pioneers of Texas and the Middle West, that of William (Billy) Dixon deserves a prominent place. William Dixon was a native of West Virgina, born in Ohio county, September 25, 1850. His mother died when he was ten and his father two years later, following which he and a small sister were sent to Ray county, Missouri, to live with an uncle, Thomas Dixon. Here the sister died and the lad, feeling that no binding ties were left and being filled with a boy's desire for adventure, decided to go west and become an Indian fighter and buffalo hunter. His adventures as a bullwhacker on a government supply train, as a buffalo hunter, and during his nine years as a government scout with headquarters at Fort Elliott, Texas, were as thrilling, and his escape from imminent death at times as miraculous, as that of any fiction from the pen of the most brilliant writer. Here is his story.

For many years before the advent of American settlers in Texas, the Comanche Indians had been accustomed to make raids into Mexico, for the purpose of securing horses, cattle and loot of various kinds, including women and scalps. Each year, in the light of the Mexican moon— for so they came to term the September full moon—the Comanche war trail swarmed with parties of these barbaric warriors, in troops of half-dozen to a hundred or more, including outlaws from many other tribes and even renegades from Mexico, who hurried forward to the carnival of bloodshed and rapine on the south side of the Rio Grande. The trail carried them over the southeastward shoulder of the great Llano Estacado, then down through the terraced pass at the Castle Gap, West Texas, cutting through the heart just above the Pecos river into the of the Big Bend. This is the story of that bloody trail and the events that occurred there.

An Unwarranted Attack On Indians

In December, 1864, Captain Gillentine of Erath county, while scouting with his company of Rangers on the tipper Brazos river, discovered a large Indian trail leading in a southwesterly direction. He followed the trail until he found that a large body of Indians were making their way in the direction indicated, and that evidently they were bent on mischief. The Indians proved to be Kickapoos, on their way to Mexico. They came from some remote section of the Indian Territory, and were semi-civilized and peaceable. The tribe decided to leave the United States and go to Mexico and take up their abode there, and chose for their route a trail far beyond the confines of civilization, only to have their trail discovered and relentlessly pursued by the vigilant Texas Rangers of that early day. It was a most unfortunate affair, and resulted in a bloody and unwarranted confrontation that became known as the battle on Dove Creek. The outraged remnant of Kickapoos reached the Santa Rosa Mountains in Mexico, where they established their base of operations, and for years their vengeance was visited upon the Rio Grande frontier, their raids of murder and plunder extending as far as the San Saba valley on the north, and the lower Nueces on the south—all these depredations directly traceable to the unwarranted attack on the tribe while encamped on Dove Creek.

We think of Crockett as a rough and rugged, crude, unlettered, yet fearless man. This account includes a poem—the only one he ever wrote in his life—written as a farewell to his native State, which shows that he was a very tenderhearted, sensitive, proud man:

"The borne I forsake where my offspring arose;

The graves I forsake where my children repose;

The home I redeemed from the savage and wild;

The home that I loved as a father his child ;

The corn that I raised and the fields that I cleared:

The flocks that I raised and the cabin I reared;

The wife of my bosom—farewell to ye all ;

In the land of the stranger I rise or I fall. Etc, etc, etc

Mentions: The Muscogees. Atabamas, and Coashattas * The Wacoes * the Trinity river * the Santa Rosa Mountains * General Ord * the Kickapoo, Mescalero, and Lipan tribes * Devil's River * the firm of Hidalgo, Lo & Co * the house of Pendejo & Sinverguenzo, of Santa Rosa * The Fennimore Cooper Indian *

Corpus Christi: "The Naples Of The Gulf"

Account records both the historical rising and subsequent development of the gulf city.

Claudius Buster Was A Mier Prisoner

The followng account of the ill-fated Mier Expedition was taken from a letter from Captain Claudius Buster to John H. Jenkins, Sr. This account was furnished to Frontier Times by Captain Buster's grand daughter, Mrs. Jos. D, Kidwell, of San Antonio, Texas.

The Allen Brothers Were Trail Drivers

One day recently when Bill Allen was in town, some one asked him about the most exciting Chisholm Trail trip he ever made. He sat down and began telling of some of the old times on the trail, when he looked up and saw his brother, P. Allen, coming, and said, "Here's a man who can tell you a whole lot about the trail." P. sat down and gave a snatch of an old trail song:

"'You may talk about your fun,

And laugh about your glory, But when you get to Abilene,

You're all honky dory.'

'Those were great old days, but they won't come back."

Then he and Bill both began to tell of the many and varied experiences as, time after time, they went up the Old Chisholm Trail. The country was all open then—no wire fences to interfere, and the Chisholm Trail was the great highway from Texas to Kansas, and Abilene, Kansas, was the popular rendezvous at the far end. Arriving at Abilene, a shave, a haircut, a bath, and the—the trail drivers can tell you the rest.

One of the earliest institutions of learning in East Texas was Marshall university, the charter for which was signed by President Houston on January 18, 1842. The first building was described as "a hewn log house, twenty by forty." The first president of the University of which we have any information was Virgil M. DuBose. It is not known when he took charge of the institution, but his connection with the institution ceased in 1849, and he was succeeded by James M. Morphis, who presided over the "male department," Miss E. J. Dickey being at the same time principal of the "female department." It is probable that these two teachers composed the entire faculty. The University of Marshall was never a university except in name. It was a pioneer institution of learning, however, and in its day supplied educational facilities for hundreds of young men afterwards prominent in all the walks of life. Here is the story of that institution.

An Echo Of San Jacinto Days

Account of Captain Thomas J. Plaster, quartermaster of the First Regiment, First Brigade of the Texas Army, whose place during the Texas war of independence was back of the firing line, where he gathered munitions of war, clothing and food, and disbursed them to the fighting units.

Men From Seguin, And The Saving Of Texas

Account of events and individuals where Guadalupe county men have distinguished themselves by giving evidence of their devotion to their country.