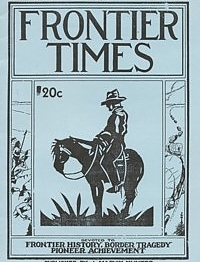 Mysteries Of The Chisos Are Unfolding

Account of geological, historical and archeological characteristics of the Chisos Mountains, and Emory Peak in Big Bend region of Texas.

Except for the fact Jefferson Davis' popularity in Washington fell into a complete eclipse after the War Between the States the history of the West and South might have been different. Instead of the West's being won and developed by the bronco, it might have been famed by the camel. Sitting Bull might have, been hunted down by a caravan of sharp-shooting United States soldiers; Southern cotton farmers might boast of "40 acres and a camel," and Gene Autry might have followed Tom Mix in a roaring clash across the Nation's silver screen on a swaying dromedary.

Research in the graduate school of Tulane University by Miss Annie E. Kidd, has unscrambled much of the fact from legend about seemingly fantastic War Department effort to win and defend, then develop the South and West, with Asiatic camels.

Jefferson Davis, United States Secretary of War before he was president of the Confederates States backed the venture. But official support had vanished when the United States went back to peace-time pursuits in 1865. The strange thing about the plan was that it worked, as far as it was tried. Here is the story.

Colonel R. P. Smyth of Plainview, Texas, writes in the article of his personal reminiscences of the enigmatic outlaw.

Dick Dowling And His Forty-Three Irishmen

Recorded on History's pages are countless true deeds of valor; some not so true, others more or less biased. The names of many heroic men are lauded to the skies, many carved on monuments lofty and high, and some are familiar in almost every home. But there are thousands whose deeds rank with the most renowned, and their names are merely mentioned in these volumes of history, and still unending numbers, who gave their all in enterprise of bravery, are quite unknown.

In Texas there was one, a conqueror, whose name should be emblazoned among the most illustrious. His deed, the most courageous, ranking not a whit below that of any distinguished human of the world, should be proclaimed by friend and foe, and many monuments should be erected in every Texas city to inspire the coming generations, of a deed that was wholly self-planned and most skillfully executed. This noble hero was Richard W. Dowling. Here is his story.

Some time ago we published an account of Bowie's battle with Indians on the San Saba river in 1831. This battle is generally believed to have taken place on Calf Creek, in McCulloch county, while some believe it was fought at Bowie Spring on Celery Creek, a few miles north of the present town of Menard. Rezin P. Bowie wrote an account of the fight, and it is given in Yoakum's History of Texas. This article is the official report of the battle made by James Bowie, who was in charge of the little band of men who went from San Antonio to search for the silver mine that now bears Bowie's name:

Brands! The very word spells romance. The days of the open range. A day gone by but still living in song and story. A day when Texas vas one great ranch. A day when thousands of cattle roamed the open range. when the cowboy was the first Citizen of Texas. When the Chisholm Trail was the First Highway of Texas. When a man was not a men unless he was expert at the "shoot big iron". Some of the old brand designs of the day tell the romantic story of the glorious period. Maybe it wasn't civilization at its height but it was a period of life, adventure and thrills.

Jesse Chisholm died at Left Hand Springs on March 4, 1868, five miles east of Greenfield, Oklahoma. He had been in the northern part of Blaine county at the salt springs, converting the brine into salt and on returning with James R. Mead, P. A. Smith, and Joe Van (colored boy) he camped on March 3 at this historic spot, Left Hand Spring. It was the famous camping ground and there were many Indians there at that time. A bear had been killed and its meat was cooked in a brass kettle and everyone ate their fill. Jesse Chisholm during the night contracted an aggravated case of ptomaine poisoning and there were no doctors within 100 miles. He died early March 4, 1868. His home was over 59 miles away and there were no roads, only trails, and no means of rapid travel and no embalming process. The friends decided to bury him in the old Indian burying ground at Left Hand Spring. In 1939 a granite marker was erected on the selected spot at Left Hand Spring.

So this is the story of the heroic death February 11, 1843 of the man for whom the present city of Brenham is named. This worthy Texas hero was the son of Robert Brenham and his wife, who was Miss Mary M. Fox before her marriage. This accounts for the Fox as the middle name of Dr. Brenham. The ancestry of this great man has been traced without a break to Governor John West of Virginia, who was a brother of Lord Delaware, and from him back to England where his ancestors were of the oldest and best landed gentry as far back as William of Normandy, also known as William, the Conqueror; son of a tanner's daughter. His rich life and courage is the subject of this account.

Lengthy and detailed article of fence-cutting wars in Lampasas County, Brown and Navarro County, Tx. Also includes account of the first installation of barbed wire in Texas By John Cogswell

Interesting diversion from Texas history, this article on the The Jibaro Indians, who in their own language are called Shuara, inhabit the virgin forests around the great rivers Pastaza, Morona, and their affluence, regions politically divided between Ecuador and Peru, and still form one of the most numerous and most important tribes of South America.

Eighty years ago Texas established on the De Cordova Bend of the Brazos, in Hood county, one of the far flung outposts of its northwest frontier. Charles Barnard, Indian trader, was the father of the settlement. Barnard had built a mill at Glen Rose several years before, but settlers came in too fast for him, so he sold out and moved fifteen miles north, into the heart of the wilderness that then marked the Brazos bottoms. He erected a double log house, which still stands, with outbuildings for his stock of merchandise, then set out for Waco to buy goods with which to enter a career of barter with the Comanches, who were overrunning the country. This was in the late 1850s. At Waco, Barnard bought not only his goods, but a wife as well - Her name was Cavassos. This is the story.