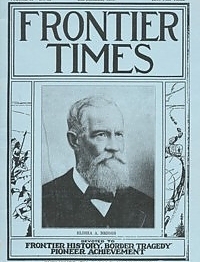 The Last Claim Of The Republic

Among a long list of claims approved by the 46th Texas legislature on the closing day of its 162day session was a claim for $16,943.60 originating when Texas was a Republic. It has frequently been referred to as the Last Claim of the Republic. Here is the story.

A Reunion Of The Chisholm Family

Along with a description of a great celebration of the reunion of the Chisholm family, T. U. Taylor offers some excellent history of the family lines of Chisholm and Cooke including the Cherokee, Creek, and Chickasaw Indian blood-lines.

By Harry A . Seran

Account describes the significance and purpose of the unusual stone monument that sits in the center of the town of Bandera, TX.

Mentions: County Warrant No. 46 * Mr. Charles Montague, Jr., the then County Surveyor * the United States Government maintains at the Bureau of Standards in Washington D.C. *

Elisha A. Briggs Was A Real Pioneer

Lengthy, detailed and excellent account of Elisha A. Briggs, who was born at Amhurst, Massachusetts, August 19, 1819, and as a young man, arrived at Austin, TX in the early summer of 1842. He served valiantly as a lieutenant in the Ranger service for many years. Following service in the Rangers, Mr. Briggs began the breeding of fine horses. He also farmed and raised livestock. He served for a number of years as a justice of the peace and notary public. In 1874 Mr. Briggs ran true to the ways of his family and entered the ministry. He assisted in organizing the Rio Grande Baptist Association at old Frio Town in 1880, of which he became the first moderator. He continued as both missionary and as pastor to the churches, preaching in both Spanish and English as the occasion might require. In spite of delicate health throughout his life, and the many hardships encountered, he lived to the ripe old age of 86 years, and died on December 29, 1905. Mr. Briggs was the father of seventeen children. This is a great story about a great man and his family.

Account included Old photo by N. H. Rose, the old time photographer of Judge Roy Bean holding court on the porch of his saloon building. In the late 1930's the Texas Legislature made an appropriation of $8,000 to restore and remodel the old Judge Roy Bean saloon building at Langtry, to be converted into a museum, to be in charge of a Mr. Dodd, a son of the late Judge W. H. Dodd, who succeeded old Roy Bean as Justice of the Peace at Langtry.

Barbed Wire Has Its Place In History

Excellent account of the origins and first use of barbed wire in Texas.

Mentions: the famous Frying Pan ranch west of Amarillo * Highway 82, 10 miles west of Sherman * J. F. Glidden of De Kalb, Ill * I. L. Ellwood * Henry B. Sanborn * Sanborn was sent to Texas where he was thoroughly disliked, but today there is a Texas village named Sanborn and a city park in Amarillo by the same name * the 125,000 acre Frying Pan ranch, the first major ranch on the plains to be encircled by humming barbed wire * Old Tascosa * Coleman county —near Jim Ned creek * the greatest amount of barbed wire ever used on a single acreage was strung around the 3,000,000 acre XIT ranch the state of Texas swapped for the capitol building at Austin * J. M. Shannon of San Angelo * The King ranch in South Texas is larger than any other ranch under fence today, but the Kings use smooth wire, enough of it to reach from Brownsville to Chicago

The Rare And Valuable Chinchilla

Whenever nature has adorned one of her creatures with a beautiful pelt, colourful features or anything else that lends itself to the commercial purposes of man, that creature is usually doomed to extermination. There is no want of illustrations. Thus the plight of the chinchilla and the subject of this account.

Indians of Texas reckoned their wealth in terms of horses, wives and guns, but they had other custom's and beliefs which weren't so easily tolerated. Their admiration for bravery, for example, went to the extreme of believing that the heart of a brave man killed in battle endowed anyone consuming it with his valor. There is no well-established verification, however, that Texas Indians practiced cannibalism.

Not all Indians were as brave as Western folklore would indicate. There are countless stories of a handful of Texans chasing a band of marauding Indiana across the prairie. Sometimes the Indians did this to bait the pursuers into a trap, but mostly they were fleeing for their lives.

If it appeared escape would be impossible the tricky Indian had a nice surprise waiting for the brave posse. He would fall off his horse and hide in the grass and then began pulling his arrow staff across the bow string. No horse, even under a brave ranger, likes to hear anything in the grass it does not understand. It could sound like a whine of a rattlesnake, but in neither instance did the horse wait to investigate. The posse would find itself out of control in no time.

The account goes on to describe other tricks of Indian warfare.

Colonel Thomas A. Stell Passes On

T. C. Richardson On The Trail

T. C. Richardson relates his own personal reflections on the Old Red River Station having served as a drover, freighter, etc and years of experience in dealing with "Old Red"

Texas drew her heroes from all the 22 existing states during 1835 as well as from foreign countries, but none surpasses the gallant men who came from the Southern states. This was due in part to the proximity of the Southern states, but more to the similarity of climate, beliefs and natures of the two sections.

Because Sam Houston and David Crockett came from Tennessee that state has been credited with having transfused heroic blood into the pioneer province of Texas at a time when she needed it most. Tennessee responded again when William Wharton and Stephen Austin went North in 1836 to obtain military and financial support for the revolution.

In matter of numbers, however, Tennessee sent fewer heroes to Texas than did North Carolina, for instance. From this state came J. Pinckney Henderson who became the first governor of Texas, James B. Bonham, who died in the Alamo, Thomas Rusk who led Texas troops at San Jacinto and later became United States senator, and Edward Burleson who fought in 31 battles and never was known to retreat.

Eulogy of free hearted, breezy westerner who loved fun, horses and his fellow man, Fogg Coffey who was born in Parker County in 1863 but at the age of three months came with his father, Rich Coffey, to the Concho river at Leaday. He worked for the O. H. Triangle ranch when Coggins and Parks of Brownwood owned it, and branded from 10,000 to 13,000 head of cattle a year. He used to rope wild mules and horses tying the rope round his body as the wild ones thundered down the hill. He tossed the loop, caught them and then hung on -he had to. He took no chances of failing -he risked his own life rather than fall. "Well I had to catch them," he says "we needed them; The Indians stole the tame horses and we had to use the wild ones."