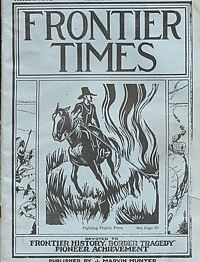 Galveston owes much of the glamour and romance which today envelopes this picturesque island to the escapades of its Buccaneer master during the first part of the last century. The pirate, Jean LaFitte, who was lord and master of this island for four hectic years between 1817 and 1821, led a band of cutthroats, sometimes as many as 1000, in bloody raids on coastwise and foreign ships in the western gulf. For awhile he did a thriving business, but when the United States got after him and his gang in earnest, he soon found his particular profession not only financially unprofitable but also physically detrimental to his own well being. So he left Galveston for good and died five years later in Yucatan. Here is the story.

The Killing of Tankersly and Carmean

James Tankersly and James Carmean were both residents of Comanche county. In the fall of 1863 they took a large supply of bacon to sell at Camp Collier, on Clear Creek in Brown county, some four or five miles from the site of the present town of Brooksmith. The men stayed two nights at the soldiers' camp, and on the second morning they started on the trip to their homes. When they had gone about six miles they were attacked by a band of about sixteen or eighteen Indians. The details of the attack are related in this story.

Men Who Had Three Funerals Each

This article records some interesting facts about triple burials of early Texans.

I account that details the tribes of Indians of the Southwest celebrating their dance of the Thunderbird at their Pueblo in New Mexico.

The Escape of Kid Curry

Account which details events of the spring of 1903, when Harvey Logan, alias, Kid Curry, mounted on a thoroughbred Kentucky mare and rode leisurely out Gay street, in his escape from a prison cell on the third floor of the Knox county jail, Knoxville, Tennessee.

The Diary of a Frontier Preacher

Further continuing the diary of Rev. Walter Smith South, a Methodist preacher on the frontier of Texas.

One windy November evening in 1894, a cow outfit struck camp just west of the Pecos River near old Fort Sumner, New Mexico. The cook allowed the camp fire to get away from him and it started up a draw where the outfit was corralled. Then it headed east for the plains country, helped by a wind blowing fifty miles an hour from the west. There had been heavy rains during the summer and the grass had grown luxuriantly. Ranchers and settlers at that time had very few fire guards. During the winter season the wind was nearly always from the west, blowing at a fifty or sixty-mile clip. Of course this made it difficult to stop prairie fires. This time the wind blew a regular hurricane for three days and nights and that fire swept through the eastern part of New Mexico, into western Texas. This story describes the details.

Thumbnail History of the XIT Ranch

The XIT ranch in the 1880's was the largest ranch in the world and it all laid in the Texas Panhandle. Its three million acres sprawled from the old Yellow House headquarters near what is now Lubbock, Texas, northward to the Oklahoma Panhandle, in an irregular strip that was roughly about thirty miles wide. It covered portions of ten counties: Daliam, Hartley, Oldham, Deaf Smith, farmer, Castro, Palley, Lamb, Cochran and Hockley. Here is the story of the greatest mega-ranch of the old Texas frontier.

Seeks to clear up confusion over the identity, pronunciation and spelling of Mier prisoner, Alfred Alonzo Lee

This story is an account of a lawyer who played a conspicuous part for many years in the courts of Texas, especially in the trial courts of the counties contiguous to the Colorado and Brazos Rivers, as far north as Williamson, and as far south as Colorado county. Especially the story concerns this notable lawyer's defense of a man, Colonel C. C. Herbert, familiarly known as "Claib Herbert," in the district court of Colorado county

Account measures the relative merits and accuracy of the claims relative to who, in fact is the fastest draw in the west - Ed McGivern of Lewiston, Mont. or Milton Hicks of Georgia?

Galveston News. Account of Jane (Wilkinson) Long, wife of Gen. James Long whose pioneer spirit and patience have caused historians to call her the "Mother of Texas”, as well as the sight of their settlement in a crude adobe fortress at Port bolivar, Tx.

A PIONEER PASSES ON.

Historical Obit. of Mr. Hugh M. Tow, an early pioneer of Llano county, Texas, and later of Fairfax. Oklahoma. He was claimed as one of Llano county's oldest pioneers.