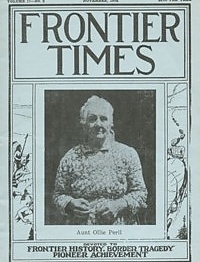 Heroines Of The Frontier

Account focuses on the heroism of three notable pioneer women who bore incredible adversities on the frontier and who braved these adversities in a way that marked them out as true heroines of the frontier. These women are Mrs. John Burleson, Ann Whitney, a pioneer school teacher and Mrs. Polly Russell of the horrible Russell massacre.

Account of the bezoar stone, the great magical cure-all, in which ancient people placed implicit faith. Bezoar stones acquired their fame in the East. One of these stones was presented to Frontier Times Museum by Charles L. Fagan, of Rahway, New Jersey. Account goes on to describe history of traditions surrounding the use of the stone in ancient cultures.

Early Work On The XIT Ranch

Account is a write-up by J. Ealy Moore, of his work on the massive XIT Ranch in the Texas Panhandle. The article is published just as Mr. Moore wrote it, in true cow country style. Mr. Moore's parents came to Texas from Tennessee in 1874, and settled near Naruna, in Burnet county. Account offers some excellent early first-hand Panhandle history.

This account offers some excellent early history and genealogy of Williamson county, Texas.

Captain Jesse Billingsley was one of the early Texas patriots who helped to win independence from Mexican rule. This is a short biography of Captain Billingsley from L. W. hemp's book, "Heroes of San Jacinto." Has old photo of Billingsley.

For five years prior to the Civil War the Second U. S. Cavalry were constantly in the field protecting the people of Texas from hostile Indians. During these years they engaged in no less than forty combats with the savages. At times, the pursuit of the Comanches led south along the old Comanche Trail that crossed the Pecos river at Horsehead Crossing, and thou ran south via Comanche Springs, now called Fort Stockton, and then via Marathon through what is now the Big Bend National Park, and on into Mexico. This is the story of Captain Albert G. Brackett, who set out on April 13, 1859, with his company from Camp Hudson to chastise the marauding bands of Comanches and retrieve stolen herds of cattle.