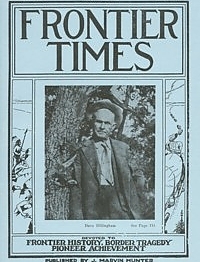 Account of the famous ranger for whom Erath county, TX is named and who was instrumental not only in fighting Indians, and in the war for Texas Independence, but also helped lay out the original town of Waco and later became one of its chief citizens. Here is his story.

The Livestock Cavalcade Of Texas

Account of the origins and early development of the cavalcade of Texas livestock industry.

Account of the hardy emigrants who make up a large portion of the population of Mason, Gillespie and other Texas counties.

The following story of the forays of Juan N. Cortina was told by an eyewitness, Captain Albert Gallatin Brackett, 2nd U. S. Cavalry. A Mexican, named Cortina, thinking he had been wronged by certain citizens of Brownsville, crossed from the Mexican side of the Rio Grande, in the autumn of 1859, with a body of armed men, and committed various depredations, killing several citizens of Brownsville. Immediately the whole frontier was in a blaze or excitement, and General Twiggs was called upon to assist the unarmed settlers.

The Great Oklahoma Land Rush Of 1889

On April 22, 1889, a rifle fire was heard at different points around the border of "the strip." It was peaceful firing and came from United States troops stationed for several months to keep back "the boomers" desirous of claiming the best farm lands and the best town lots at those points in Oklahoma where large towns and cities would probably rapidly grow. The President's proclamation went into effect at noon on April 22, and the signal that the land was open was the firing of the rifles of troops that had held back the restless mass for many months. Here is the account of that event.

Origin Of The Name Of Dixie

Account addresses the question of the meaning of the term, "Dixie," how it originated, how it grew to favor.

Jefferson Davis Dillingham was born at Old Brooksville, Williamson county, Texas, (but since, Brooksville has changed its name to Florence). He was the son of Brice and Sarah Woodward Dillingham, and was born in the year 1866 at the close of the Civil War. Mr. Dillingham was a life-long hot-headed fighter and a railroadman. Here is his story.

The Origin Of Some Texas Names

"Where did it get its name?" This account answers the question as well as the source of other Texas names such as: Bexar * Concho * San Saba * Frio * Nueces * Blanco * Bandera * Uvalde

Big Foot Wallace, the noted Texas frontiersman and Indian fighter, died in poverty in 1899. His remains now rest in the State Cemetery at Austin. Because of his service to Texas in various battles he was given several land grants. but by carelessness and loose business methods he lost all of his land possessions. This is a brief account of some of his transactions.

Sham Hays And His Race Bull

Ghost Town Has One Lone Resident

Story about old Frio City, once a teeming metropolis of South Texas, but now just a ghost of its former self. The town was founded in 1871 as the seat of government for the fledgling county of Frio. There followed an era of prosperity, during which this frontier settlement reached a population of 1500 and boasted two hotels, three general stores, three blacksmith shops and the usual saddle and harness shops, restaurants, dance halls and saloons. Here is the account.

Captain Hawkins On The Mexican Border

Account of R. C. (Red) Hawkins, of the Texas Rangers, Son of Cattleman T. T. Hawkins, who joined up with the Rangers at Laredo in 1912, as a 21 year-old, being assigned to Capt. John J. Sanders' company of 15 men, all mounted for horseback scouting along the Mexican border: Major crimes then were rampant, Mexico was hot, bandit raids were common. Arms and fugitives flowed across the border. Here is the story of his career in that dangerous position.

The Texas State Historical Association is an organization devoted solely to the collection, preservation, and dissemination of historical information about Texas. It is probably the oldest learned society in Texas. Judged by its work, it is easily the most distinguished. In 1897 it began the publication of a magazine known now as The Southwestern Historical Quarterly. In forty-two years this publication has never missed an issue, and today the forty-two volumes comprise tile greatest single source of information about Texas in existence. Here is the story of that organization.

Account of old trail driver from Seguin, J. K. Alley who says, "Why I was only eleven years old when I begun to tote a gun. There'd be less of robberies if it wasn't for the law that won't let a man carry a gun. I traded for this one in Montana in 1884 while I was there. I stayed there for seven years. I went up there with cattle in '79 and '80 from Mason county. I've known the time in Texas when no thief would dare stop a man because he knew every man carried a gun. A man could drive up to a bar in San Antonio and take silver dollars out of his morral and leave it on the horn of his saddle, go in and play roulette, then come back hours aftcrwards and nobody had disturbed his money in the morral bag. The idea of having a law that a man can't carry a gun; why that lets a thief carry one…"