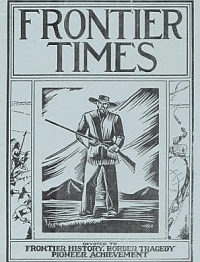 From "Indian Wars and Pioneers of Texas," by John Henry Brown.

The first settlements in the present territory of Parker county were made about 1853-4. The county was created by the legislature. December 12 1855, and organized March 2, 1856 It was long exposed to forays by bands of hostile savages, and this story details certain successive massacres in Parker county during that early period.

By May Stevens Isaacs, Canadian, Texas.

Account of John A. Chambers of Canadian, Texas who was born in Hood county, Texas, in 1860, and grew to young manhood there. John Chambers liked the Panhandle country and in 1883 became a cowhand on the Springer ranch where he worked under for about five years. Later he opened a mercantile establishment which he ran for forty years in Hemphill County. Here is his story.

Account details the origins of the school which actually begun in 1850 in Huntsville, Texas, and was called Austin College. It became a factor in the education system in Texas. It was started some ten years after the McKenzie School at Clarksville and the college at Rutersville near LaGrange. Daniel Baker soon became connected with the institution and many notable men who made their impress on educational affairs of the state were connected with its faculty. Here is the story. (Contains old photos)

Real county, tucked away in the heart of the Hill Country of Texas' vast domain, helped to make pioneer Texas history. Here in the mid to late 1800's, Apache, Comanche and Lipan Indians stalked the early settlers. Adjacent to Camp Wood the historic old mission, San Lorenzo de la Santa Cruz, was established at the request of the Lipan Indians because the predatory Comanches were warring upon them, as well as upon other less ferocious tribes. Here is the story of the old frontier mission.

AS RECORDED BY "OLD-TIMER."

Submitted by Captain Thomas J. Jenkins, U. S. A., Retired.

Mr. Jenkins offers some additional information regarding Captain Brackett's Big Bend Expedition (as set forth in the November 1939 issue of Frontier Times), and of the encounter which preceeded it known as the Wichita Expedition.

Biographical account of Texas Ranger Captain Jack Coffee Hays, early settler at Seguin, who at the age of nineteen joined the Texas army, the day following the Battle of San Jacinto, and served thereafter as a scout in the Texas army. In 1838 he was one of the most daring and successful fighters the Texas Ranger service had ever known. He was captain of his company of seventy-five men.

Story of love-sick and heart-broken Indian girl whose sad and untimely death was immortalized in the hearts and memory of the pioneers of the town of Fort Davis, TX.

Mrs. Frances A. Nixon Passes On

Biographical sketch and obit. Of Mrs. Frances Andrews Nixon, pioneer Texas school teacher and oldest member of the American Legion Woman's Auxiliary, who came to Texas in a stage coach in 1869, was the mother of Dr. P. I. Nixon, prominent San Antonio physician.

Biographical sketch and obit. Of Colonel Upton Lorentz who passed away at Comfort, Texas, on December 5th, 1939 at nearly 90 years old, but had been active up to a few days before he was stricken with the illness that resulted in his death. Colonel Lorentz was a man of wide experience and remarkable personality. He had been a railroad engineer in Mexico and South America in the early 1880's.

Mentions: * the Isthmian Canal Commission * the Calebra Division * construction of the Panama Canal * the Orinoco river * Louis Faust, in Comfort *