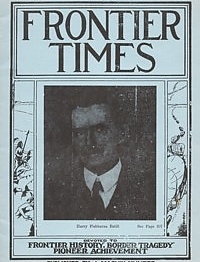 3 Songs from the Texas Frontier:

I COULD NOT CALL HER MOTHER,

The marriage rites are over, and now I turn aside.
To keep the guests from seeing the tears I could not hide.
I wreath my face in smiles, and lead my little brother
To greet my father's chosen, but I can-not call her Mother.
Chorus:
She is a fair young creature, with meek and gentle air,
With blue eyes, soft and loving, and sunny, silken hair.
I know my father gives her the love he bore another,
But if she was an angel, I could not call her Mother…

JUST AS THE SUN WENT DOWN

Belinda's been a-shopping;
She's looked at silks galore And hats and hose and velvet
Enough' to stock a store.
She's ask the price of bronzes…

Many people think it consists solely of errors—lies, superstitions, idle rumors or childish fancies disproved by history and maintained only by the ignorant. Many historical characters, in Texas as well as elsewhere, have become folk characters. This account, written by Texas’ foremost frontier historian describes the relationship between legend and men like James

An Interesting Letter From Mrs. Traylor

Account further continuing the diary of Rev. Walter Smith South, a Methodist preacher on the frontier of Texas - extracts from his experiences in 1860 to 1869.

A Voice From The Past

Account of old Zadock Woods, who immigrated to Texas from Missouri in the original Three Hundred of Austin's colony.

"I had rather die than retreat!" These words were uttered by the venerable Zadock Woods while on his march to defeat General Woll's army during those soulstirring days of the Republic. Woods, who was then near eighty years of age, was then living at La Grange. He fought with General Jackson at New Orleans and with the Texas army in the War for Indeperdence, and was getting along well hi years when the Mexican invasion rallied young and old once more to do battle. Although his form had lost its vigor and his eye its keenness, his martial spirit was undaunted and he was among the first to respond to Captain Dawson's call for volunteers. His family and friends tried to dissuade him from going on account of his age. This is the story of the great man...

Excerps From Records Of The Firth Cavalry

Harry Fishburne Estill (Story includes old photo of Mr. Estill, Miss Minnie O. Rawlings, & T. U. Taylor together) was born in Lexington, Rockbridge county, Virginia, August 12, 1861, the son of Patrick Estill and Katherine (Fishburne) Estill. The Estill family came to Teas in 1869, and located in Washington county. Charles Estill, the father, was an educator of broad training. In 1880, he was elected a professor in the A. & M. College. Later he was elected a teacher in the Sam Houston Normal Institute at Huntsville in 1881, but died after teaching one year. Harry Fishburne Estill was elected to succeed his father in 1882. This is his story.

When Sam Houston crossed the Red River, known to historians as the muddier Rubicon of Texas, he carried a Bible and a copy of the Illiad in his saddle bag and founded an empire. I: was not, however, the determination of Houston alone that gave Texas its rich heritage. It took the bravery and courage of Travis and Bowie, the vision and leadership of Lamar, the statesmanship and stability of Austin, and the fight and sacrifice of thousands whose names have now faded to build the rich tradition of Texas.

The following essay by Jack Love, was awarded a prize by the Battle of Flowers Association of San Antonio, and in published in this edition Frontier Times by permission of that association.

Account of Mrs. Sarah Ann Ross Pringle, pioneer citizen of Falls county, who was born near Meridian, Mississippi, on the 25th day of September, during the year (1845) that the Ninth Congress of the Republic of Texas met in Washington-on-the-Brazos to consider the serious matter of annexation. Sarah Ann came to Texas at the close of the war. The way was long and dangerous, for the period of reconstruction had set in. She was the typical Southern type tower of strength that knew the hardships of war and the desperations of pioneer life in Texas. Sarah Ann Ross, descendant of Betsy Ross, the flag-maker of America, left her native state of Mississippi at the age of twenty years and settled with her family near Madisonville, Texas. This is excellent genealogy of Ross and Pringle families of Texas.

Account of the wild steers of Texas that became known as "Mavericks." The word maverick did not become common until along in the 1850’s, when Samuel Maverick had a little herd of four hundred head of cattle that he had taken on a debt, the increase of which his negro range rider seldom branded—so that when people saw any unbranded animal they called it "one of Mavericks," or simply "a maverick." But long before the word was invented there were many, many mavericks in that part of Texas below the plains. Here is the story.

AS RECORDED BY "OLD TIMER."

Submitted by Captain Thomas J. Jenkins, U. S. A., Retired

This account continues the narrative of what was known as, THE WICHITA EXPEDITION.

THE PASSING OF A LIFE-LONG FRIEND

Mentions the passing and a brief sketch of the life of Mr. John Wilburn White. Mr. White was 85 years old, and was a pioneer ranchman of Mason county. He had been president of the Mason National Bank, which he established, since 1902. He was the son of Thomas J and Mary E. White. His father came to Texas from Mississippi in 1850, and settled in Gonzales county, where he engaged in farming.