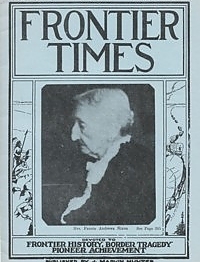 Washington, Texas, known in history as Washington-on-the-Brazos, is located in Washington county, Texas, and, as its name indicates, is on the Brazos river, near the confluence of that stream and the Navasota river. Today it is difficult to imagine that, in surroundings so peaceful, were enacted scenes that have influenced profoundly, not only the course of Texas history, but that of the United States and Mexico as well. It is the purpose of this story to set forth in part, at least, the ways in which Washington has contributed so very largely to Texas history.

Before Roy Bean made himself Law West of the Pecos he lived in San Antonio, where he was engaged for a short while in the dairy business. That industry came to a sudden end when a customer found a minnow in the milk. Shown the evidence, Bean said: "Well, I declare ! I don't know how that could've happened unless them cows drank that there river water." Old timers in San Antonio still point out an area on South Flores Street, between West Lubbock and Glenn Avenue, that was once called Beanville, where Roy Bean lived and ran a saloon and later his short-lived dairy business.

Chivalry And Romance Of The Open Range

This interesting article is by W. C. Moore of Houston, pioneer Texan, who has played a leading role in developing that section. For years he was a land developer, turning virgin soil into prosperous farms. Mr. Moore was largely responsible for making rice-growing a major industry of Southeast Texas. Mr. Moore eventually entered the oil business but as a young man Mr. Moore was a cattleman. The article focuses on early history and development of The counties between Victoria county and the Sabine river, comprising Matagorda, Jackson, Wharton, Brazoria, Fort Bend, Harris, Galveston, Liberty, Chambers, Jefferson, Orange, Hardin, Waller, Austin and Colorado. This was largely prairie land and designed as the southeastern portion of the stock raising territory in Texas, and commonly known as the best breeding ground.

Mentions: Luce Bayou * Among the early cattle owners in what is known as the Dayton territory were the Munsons, Linneys, Pruetts, and Isaiah Day * The town of Dayton was named for Mr. Day * Among the large cattle owners in the western part of Chambers county were the Barbers, Fishers, Winfrees, Lawences and Duttons. In the eastern part of Harris the Dunks, Scotts, Sims and Foremans were the large cattle owners * Perhaps the largest brand in the west portion of Liberty and Chambers counties was the MD that branded about 2200 calves a year * The M. D. brand * Shanghai Pierce * Tom Nye, foreman for Shanghai Pierce * Mr. Ed Pruitt * Oates Prairie * the Butler brothers and Aliens * The Oates * the Grimes, Hawkins, Rugleys, Duncans, John Pierce * the Whites, Jacksons, Mayes, Brousards, the McFadden, Pipkins, Heberts * Chambers county, east of the Trinity river * Morgan City * a cattleman by the name of Fisher * Roger Morris, sherriff of Liberty county * John Stiles * Joe W. Davis, a large stockman living at Dayton * the I. G. N. railroad * Palestine * Mr. Beasley Pruett of Liberty county * Mr. Henry Dutton of Chambers county * The Groesbeeck family were pioneers in the San Antonio area * John Morton Groesbeeck * the Matador Land and Cattle Company

Flowers and Fruits From the Wilderness

A Pioneer Class In A Pioneer School

Account of the first year of the old Sam Houston Normal Institute at Huntsville, in 1879-1880. The class consisted of a wide and varied array of students including some Irish, some Dutch, some Spanish, Anglo-Saxon, Scotch, and other nationalities. There is one common characteristic in that they were all poor. There were few frivolities, very little society. This is the story.

SELLER’S NOTE: THIS ACCOUNT IS UNUSUALLY RICH IN HISTORICAL AND GENEALOGICAL DATA OF THE REGION AROUND LEANDER AND WILLIAMSON COUNTY, TX.

This account of early history of Williamson county focuses especially on what was once known as Bagdad Prairie, later the town of Bagdad, TX, a community on the South Fork of Brushy Creek that is now part of Leander.

Mentions: James E. Babcock (contains excellent old photo) * on all that prairie only four settlers: a man named Rice, whom my father bought out; a German named Smeltzer, and his two sons-in-laws, Harris and Dawson, all-located in the west end of the postoak grove where. about in 1854, my father surveyed out the town of Bagdad * the Methodist Church in Platteville, Wisconsin * the Reverend Josiah Whipple volunteered to go to Texas as a missionary. * Reverend John Clark * Mrs. McGee * Angell Whipple * Neva England ancestors * Captain John Whipple who arrived soon after the landing of the Mayflower * Roger Williams * the Temple Telegram * the Hornsbys and Fisks * a log cabin built by one of the Hornsbys * the Hor. James H. Faubion * this was the first settlement in Williamson county * Mr. Smeltzer's cabin * Webster Massacre (1838) * Bowmer and Davis settlements * Thomas Huddleston * James Williamson, George Craven, and Robert Marley * Craven, was from Indiana * Mr. Smeltzer * Marley, after a few months, move to the Bend section of Lampasas county, where afterwards his son, R. N. Marley, became a large land owner and prominent stockman * Nicholas Branch and James Branch * John Faubion came to the Prairie from Tennessee * Robert Hanna and Col. C. C. Mason * Hanna moved a few miles east of Running Brushy * an Irishman who said his name was Willis, * Judge Lynch * Judge Greenleaf Fisk * the San Gabriel, about four miles north of old Bagdad * Abe Smeltzer and Fielding Dawson * John Snyder and Tom Snyder * John E. Heinatz built the first black-smith shop in Bagdad * The first store house was built by one Schaffer * James B. Knight * Dan Emmett * Prof. William H. Russell * A. E. Walker * Wesley Craven * Round Rock

Times Were Worse At Valley Forge

By Andrew B. Marker.

Old poem reciting the peril of Valley Forge and the troops under Washington during that fateful event.
Ah, things looked dark for Father George,
And his gaunt old crew at Valley Forge!
And Washington there, so legends record,
In that night of despair, unbuckled his sword,
And kneeling in prayer on the frozen sod,
Appealed his Cause to Freedom's God…

Frances Amanda Andrews, daughter of Eleazer and Mary Hix Andrews, was born in Randolph county, North Carolina, on the Uharie river, November a 1843, and died at Luling, Texas, December 7, 1939, in her 96th year. She came with her family to Texas in 1866, and her first home was at Belmont, in the western part of Gonzales county. She later married Captain Robert Thomas Nixon and settled on the Nixon Plantation of 14,000 acres, located in Guadalupe county, six miles south of the present Luling. This is her story.

Account of Thomas Ulvan Taylor, born in 1858 along the Texas cattle trail twenty miles from Fort Worth, who became the first Texan to receive an honorary membership in the American Society of Civil Engineers. Mentions: Professor Emeritus Henry S. Jacoby of. Washington * Professor John Focht of the University of Texas

A Tribute To Edgar Nolte, Of Seguin

Indians Scalp A Man And Take His Whiskers

Account of the brutal murder of Old Man Cason of Brown county, on Rocky Creek and verified by W. M. Cason, a grandson of the slain man.

The Years Of The Locust

The Seguin Enterprise. Reflections of the close of the 1930’s - One of the most eventful decades in modern history.

The 1930's will be known to the historians of the future as the years of one of the greatest and longest depressions this or any other nation ever experienced. They will be known as years of experiment, of trial and error, of the weighing of our old values and our old traditions. And they will be known, to, as years in which the democratic process was consistently attacked by some of those who called them selves it friends, as well as those who were its frankly avowed enemies…

On a summer's day when the waves were rippled
By the soft and gentle breeze,
Did a ship set sail with a cargo laden For a port beyond the seas.
There were sweet farewells, and loving signals,
While a form was yet discerned, Though they knew it not, 'twas a solemn parting
For the ship that never returned…