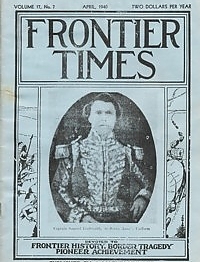 This is the account of cold-blooded gunman, John Glanton of San Antonio who, after abandoning his wife and infant daughter in San Antonio, left a bloody trail over the Southwest, not only in Texas, but Arizona, California and New Mexico. Here is his story.

A poem by Frank H. Bushick.

The river is crooked as a snake,
Its cowboys the rootin', tootin' brand; There's not a counterfeit among 'em, Down by the Rio Grande.
Jokiest, wittiest set you ever saw,
Tellin' yarns and laughing out loud, About scrimmages with the law,
A whopper breaks up the crowd.
About a cowboy in a hospital,
They brought him a graveyard stew; He heard what they called it,
"Not for me," said be. "Goes for you."
One night he stopped at a ranch…

SELLER’S NOTE: AS IN THE PREVIOUS ISSUE (MARCH, 1940) HERE IS SOME HIGHLY VALUABLE, RARE AND VERY EARLY WILLIAMSON COUNTY, TEXAS HISTORY AND GENEALOGY.

Account begins with a description of Thomas Kenney, Kentucky doctor who came to Texas in 1833 and founded Fort Kenney in Williamson county in 1838. The Kentucky surgeon came south in search of a suitable climate for his wife's health, who, in an aged and yellowed clipping from a Georgetown newspaper, is declared to be "the first white woman who died in the territory within the limits of Williamson county."

A Story Of Three Macks

This rather unusual coincidence of frontier days concerning the lives of three Macks—McKinney, McCoy and McCall—in which the first-named Mack died at the hands of the second Mack, and he, in turn, died at the hands of a third Mack is recalled by Mr. S. C. Butler, well known Karnes County cattleman and historian.

Sad account describes the experiences of Mrs. Clarintha Draper, long-time resident of Pontotoc, Mason county, whose flight from Arkansas during the civil war holds a similarity to that of "Gone With the Wind’s" Scarlett O'Hara from Atlanta. Her story recounts when she and her husband, George Washington Draper, left their home in Texas and went to Arkansas. Soon the Civil War broke out, and Draper was caught stranded penniless in Arkansas with his family. Meanwhile the Union forces had burned Mrs. Draper's home and all of her possessions. This is the story of that event and of her life.

Account of Captain Samuel Highsmith, born in Boone county, Kentucky in 1804, one of the early immigrants to Texas one of her first Rangers. Extensive history and genealogy of Highsmith.

Of His Expedition For The Exploration Of A Route To Presidio Del Rio Grande And Paso Del Norte.

Lengthy historical records of by Captain Thomas J. Jenkins, U. S. A. Retired. He describes the many and varied events of the Regiment he was attached to during its early days in Texas. The account is from notes contained in his Scrap Book, a collection representing forty years of research and labor. There is much fascinating and little-known Texas history in this account.

When Will Rogers Visited The Old Range

In 1926 Will Rogers, the beloved cow-boy humorist, visited San Antonio, and while there he was the honored guest of the Old Time Trail Drivers at a barbecue in Brackenridge Park. At that time efforts were being made to raise funds for the erection of a monument to the Old Trail Drivers, and Will Rogers gave $500 to the fund. Since then Will Rogers, George W. Saunders, Ike T. Pryor, Mrs. R. R. Ruessll, John R. Stocker, and many of the others connected with the movement have passed on to their eternal home. Will Rogers wrote the following account of his trip to San Antonio, and his reception by the Old Trail Drivers: This was sent to Frontier Times by Colonel A. Huffmeyer, custodian of the Trail Drivers' Memorial Hail in San Antonio :

The pungent smell of the desert sage Ascends fom the open trunk ;
He scans with eyes that are dim with age
The bundle of dutsy junk
A rope, a saddle, a broken spur,
A rag of a Navajo,
A tarp, a bridle, and chaps that were The things of the long ago.
A slicker streaked by the Texas rains,
And boots of the "shop-made" brand, Besmeared with mud of the Pecos plain
And worn by mud of the Brazos sand, A hat besmoked by the campfire grime, A holster, a belt and gun,
And blankets gnawed by the teeth of time
And bleached by the southern sun.
A shattered wreck of the vanished. years,
A voice from the silent past,
A ghost that calls through a veil of tears,
A flower with its 'petals cast,
A pile of trash in an attic room,
A man with a head of gray,
An eye that fades in the…