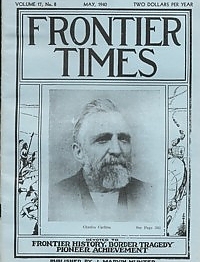 The first flag unfurled in the young Republic of Texas became known as the Bonnie Blue Flag. It was designed by General Lorenzo de Zavala, the grandfather of Miss Adina de Zavala, 141 Taylor Street, San Antonio, and adopted May 11, 1836, by the Republic. of Texas. This is the personal account of F. G. Crawford, of Oakville, Texas, who had written some of his experience while a soldier in the 32nd Texas Cavalry. He describes the story of the flag.

The Dinosaur Tracks In Bandera County

Account describing the work of Dr. Roland T. Bird, of the Department of Vertebrate Paleontology of the American Museum of Natural History of New York, who did extensive research work in Bandera county, uncovering evidence that prehistoric animals once lived and roamed throughout Southwestern Texas.

From El Paso to the sea flows a river. It rolls out of the mountains of Colorado, hell-bent for leather, tires when it hits the hot tamale and frijole country, staggers and, finally, falls into the Gulf of Mexico. It is soaked with the blood of men. The bottom is laid with the bones of those who fought for money, love, glory and politics…

Account continues the diary of Rev. Walter Smith South, a Methodist preacher on the frontier of Texas. Here are more extracts from his experiences in 1860 to 1869. These ex-tracts taken from the original diary, appear in Frontier Times at intervals for several months, and will continue in later issues. If you want the whole series, contact us here at Oldventures Frontier Times Archive.

A Long Dry Drive On The Cattle Trail

Account of old trail driver, Adolph Huffmeyer who, in April, 1878, drove cattle on the Old Chisholm Trail from Texas to Ogallala, Nebraska.

He's a quiet, easy fellow, with his pants tucked in his boots,
And he wears a big revolver, which he seldom ever shoots.
He has served. his time as ranger on the reckless Rio Grande,
And he has the reputation for great marksmanship and sand ;
He has strung up several horse thieves in the rustler days gone by,
And although he seems so pleasant there's a devil in his eye.
When he goes to take a prisoner he...

The Counties Of Texas

June 18, 119 years ago, Stephen Austin left New Orleans for Texas. In his mind there were doubts regarding the province of Texas, but in his heart were the ringing words of his father that he push forward the colonization plans.

Unknowingly Stephen Austin was launching again into a brilliant career...

The Big Thicket Of East Texas

Excellent article on the Big Thicket of East Texas – the uniqueness, the wildlife, the hunting, etc. A very informative and interesting article.

Mentions: Judge L. B. Hightower who presided over the district courts in Liberty, Chambers and Hardin county, told me about the middle of the 90's he and others that hunted with him had killed 70 bears in Southeast Texas up to that date * There were other noted bear hunters in Liberty county, namely, Bob Whittington, Aaron Cheery, Nev Green, Marion Wells and Will Berrybill. * Hardin county contributed its quota of bear hunters, who enjoyed the sport and killed a great many bear, and whose names are as follows: Carter Hite, Johan Pevito, Eh Chance, Hardy Turner, Bud Hooks, Ben Hooks, Jake Lloyd, Wiley Brackin, John Jordan, Tom Hughes, L. B. Hightower Jr., and Dunk Grattin * Captain Barbee, who lived at Wharton

A Tribute To Charles Carlton

Charles Carlton was born in Kent County, England, August 21, 1821. He was the son of Charles and Mary Carlton. In 1829 his father came to America and was influential factor in building the first railroad from New Orleans to Lake Ponchartrain in 1829. Charles later made his home in Bonham, TX where he became an influential teacher and preacher of the gospel, being of the Campbellite (Church of Christ) persuasion. This is his story.

Lengthy and detailed account of the murder of Sam Sparks (the author’s grandfather) who was born in Tennessee in about 1854. He was the son of Anderson Sparks and Mattie Aiken Sparks, and an elder brother to Hugh, Will and Ike West Sparks. The Sparks boys were induced to come to Texas after the Civil War through the prosperity of their mother's relatives, Wash, Sol and George West. The mystery that surrounded the assassination of Sparks was not a mystery to his family, his close friends, or to many other citizens in Giddings at that time. But in those days it was best to keep quiet on some things and this case was one of them. Here is the story.

G. W. Arrington, a native of Alabama, served with the Confederate forces during the-Civil War. In 1867 he made a trip to Central America but returned to settle in Brown County, Texas. While living there, he entered the service of the Texas Rangers with the title of Sergeant. In 1877 he received a First Lieutenant's commission and in 1878 was promoted to Captain, a title by which he was ever afterwards known. This is his story.