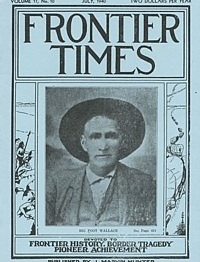 In this series of accounts, T. U. Taylor describes the early settling, dangers, and development of the Texas Hill country, especially focusing in on four valleys; the Pedernales, an oval valley some twenty miles across, the valley of the Guadalupe, the beautiful Bandera valley, and the valley of the Sabina. The account was originally a public address and the following excerpt reveals the sad circumstances under which the address was offered.

It is with a sad heart that I greet you, fellow pioneers, today. Last Monday the thread of the life of my only son was snapped in the twinkling of an eye, and three days ago we lowered his body into Texas soil in the City of Austin. Had I consulted my own feelings, I would not have appeared here today, because it is with a sore heart that I look into your faces. But again, I thought of the homes in Bandera, Kerr, and Gillespie counties where great tragedies had occurred, where the red warriors shed the blood of some pioneers, captured children and murdered not only the father, but the mother and often little children, and in all cases the survivors of the family never retreated, but took up their duties the next day and carried on the part of your ancestors, I stifled my grief and came to mingle again with you.

In my talk today I shall distinguish between the pioneers and the frontiersmen. A man can be a pioneer and never run into danger, but a frontiersman was in danger from the lurking savage and the red warrior every minute of the day. He never went without his sixshooter, his rifle, or shot gun. He was always ready, and every stream and spring in Bandera county has been dyed by the blood of the frontier pioneers—your ancestors—from Fredericksburg to Uvalde...

HISTORY OF THE GREEN FLAG

The state of Texas has been ruled under seven different flags, the last of them the green flag, raised by a group of revolutionists in the early part of the nineteenth century. The history of the state under all of these flags, but particularly the last one, is told by Dr. Kathryn Garrett, who received her doctorate from the University of California in 1934 and is now a school executive of Dallas.

Dr. Garrett's work throws new light on the interest of President Madison in the various revolutionary movement in Texas. It appeared that the American government welcomed the spread of revolutionary struggle from Mexico, seeing therein an opportunity to…

The famous watch chain worn by "the Grand Old Man of Texas" is going to sag a little lower—he's got another medal. T. U. Taylor, for more than a generation dean of engineering at the University of Texas, has been informed that the University of Virginia at its commencement exercises, awarded him a new prize—the badge of membership in the Thomas Jefferson Society of

Patriarchs. The honor is …

Houston Wade, Author of "Notes and Fragments of the Mier Expedion"

Account of Capt. John Reagan Baker, soldier and son of Peter and Margaret Laura (Reagan) Baker. He was born near Blue Springs, Green County, Tennessee, on August 6, 1809 and made his first visit to Texas in 1836. In 1839 he returned to Texas and became a member of the Texan auxiliary corps of the Federalista army encamped at Fort Lipantitlán. Later he went to Refugio County and settled in Aransas City where he was elected sheriff of Refugio County on February 1, 1841, and organized a company of minutemen, of which he was captain. After gallant service, Baker returned to Refugio County and established a mercantile business at Saluria, on Matagorda Island. At the outbreak of the Civil War, he organized a home-guard company and was elected its captain. After the war he lived in Goliad County for a while, then moved to Indianola and again entered the mercantile business. In 1876 he moved to Wilson County, to a ranch near Stockdale, where he died on January 19, 1904. This is his story.

The Pecos river, from its headwaters at Truchas Peak to the mouth of the Rio Grande, has certain definite strips or stretches that are distinctive. In this account, the author describes characteristics both historical and geographical of some of the more notable stretches of the great Texas River. This is a multi-part article and in this first installment details the following areas: POPE'S CROSSING, MOUTH BLACK RIVER, EDDY, CARLSBAD, LAKE AVALON, SEVEN RIVERS, RIO PENASCO, LINCOLN ON THE BONITA, SOUTH SPRINGS RANCH, BOSQUE GRANDE, FORT SUMNER, ANTON CHICO, PIEDMONT SECTION, SAN MIGUEL, CANYON SECTION.

Account of Indian raid that occurred in August, 1863, about eight miles northeast of Hamilton in Hamilton county, Texas where lived Mr. Green and Mr. Austin, their ranches being about 400 yards apart. These ranches were on a little creek known as Boggy, a tributary of the Leon River.

Accounts mentions discovery of valuable and informative papers bearing on plans which might have changed the outcome of the Alamo "massacre" and other events in early Texas history. The papers, classified as the Ira R. Lewis papers and which have been erroneously called the Austin papers, were discovered in the basement of an El Paso optometrist's shop, and were in possession of Lillian Fleck, El Paso high school student and descendant of Moses Austin, "father" of Texas.

This post was located in Jack county, Texas, November 26, 1867, in latitude 33 degrees 15 minutes north longitude 21 degrees 15 minutes. west, on the south bank of Lost Creek, a branch of the Trinity river, and abandoned May 23, 1878. The town of Jacksboro is half a mile from the post. This account describes the geography and historical relevance of the old fort.

Account of William A. A. Wallace, better known as "Big-Foot" Wallace, real Texas frontiersman and Indian fighter. Frontier Times Magazine has printed numerous more lengthy versions of the life of this great man. In this account, the editor himself offers an excellent introductory sketch and overview of the man.