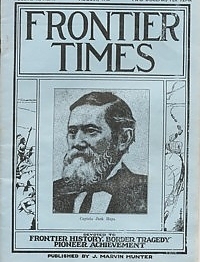 The excellent, detailed and historically valuable autobiography of Samuel H. Sutton, of Bandera county, Texas, was prepared and written by his daughter, Mrs. F. V. Tankersley, of Medina, Texas.

Account mentions certain raids that occured in the year 1869 and 1870 Coryell county and one or two men killed, but there weren’t any Indians in that country in either year, but white men playing Indian. This is the story.

A Woman In A Texas Ranger Camp

Account is taken from the experiences of Mrs. Dan W. Roberts, wife of Ranger Captain Dan W. Roberts, about the camp life at Menard, situated on the beautiful San Saba river. It contained only a few houses in 1875, and most of them were made of cedar pickets, had dirt floors and no spare room. The Roberts were fortunate to find one house with three rooms. The family that occupied it numbered seven, but were kind enough to spare one room for the Ranger and his wife.

It was a log cabin with one room, a dirt floor, clapboard roof, a large chimney on the south side, a lean-to cut into two small rooms. One of the small rooms was occupied by the old loom, the spinning wheel, and the wools rolls. The other was a kind of pantry store-room All the cooking was done in the main room. As you entered the door, you passed under the old rifle which hung over the entrance. On the right of the door was the bed with one post, the side and the end rails attached to the walls. The trundle bed was under it. Across the front of the fire-place was an iron bar from which hung a big pot, 9x12 inches across and 10x15 inches deep, in which was boiled the greens and jowls and out of which…

Mentions: Mrs. Stephen Heffington, whose home was a half a mile away * The Tankersleys, the Glenns * Aunt Mandy *

Account depicting some of the high lights in the life of the first white male child born upon Texas soil. These fact, were taken from an old diary held sacred by a granddaughter, the writer of this biography. The account is gathered from the diary of John Reed Robbins.

Mentions: William and May Robbins * [his] parents who migrated to this country from Scotland and were among the first group to join Stephen F. Austin in colonizing Texas in 1821, settling in Grimes county, and the Brazos river * Miss Martha Jane Fitchett of Houston, Texas

Perhaps the most distinguished of all the gallant host that made up the Texas Rangers during the frontier days, was Colonel John (Jack) Coffee Hays. The best tradition of the Texas Rangers was established under the leadership of Captain Hays who seemed destined for greatness from his earliest days, being a very specimen of both wisdom and courage. Here is the great man’s story.

Mentions: His home in "La Villita'' on the northwest corner of Nueva and South Presa Streets * "Deaf" Smith, who helped to make victory possible at the Battle of San Jacinto, by burning Vince's bridge * General Andrew Jackson and General Ben McCullough * Little Cedar Creek, Wilson county, Tennessee * "The Hermitage" that General Andrew Jackson bought * the Battle of Plum Creek * Flacco * Peter Fohr * Captain Richard Addison Gillespie * Captain Tom Walker * General Rafeal Vasquez * General Adrian Well * Matthew Caldwell * John McCullough' and his wife * Captain Nicholas Dawson * General William Jenkins Worth * Miss Susan Calvert * Colonel John C. Hays Was pioneer of pioneers. His heroic courage, dauntless bravery, great endurance and perseverance was protecting settlers along Texas frontiers from the scalping knife of savage Indians. He had few peers and no superiors. For magnetic power in firing the hearts of his comrades to emulate his daring spirit he equaled the great leaders knew in our history. As a soldier, civil officer, citizen, husband, and father, his life was such that he was respected and beloved by all that knew him.