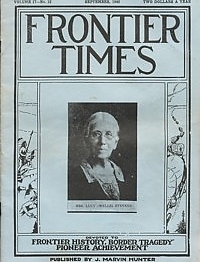 On the 22d and 23d days of. December, 1863, occurred one of the most bloody and destructive Indian raids to which our poorly protected frontier was subject during and for some years after the late war. At this time Col. James Bourland, one of the bravest and truest of all our frontiersmen, commanded a regiment of Confederate troops with his headquarters at Gainesville, but at the time of this particular raid he was in Bonham, on official business with General Henry E. McCulloch. Col. Bourland had to protect with his regiment such an extended reach of frontier that he was compelled to scatter his troops in small squads far apart, and for this reason it was impossible to concentrate any considerable number of his troops at any given point in time to repel such an invasion as this. At this time Captain Wm. C. Twitty, a brave and true soldier, was in command of the few troops of Col. Bourland's regiment, that then happened to be at and near Gainesville not exceeding fifty or seventy-five in number.

The women gathered in the house were frantic. It was supposed that all had been killed at Elmore's as the house had been seen to burn. It was known that they had as much or more fighting force at Elmore's than they had at Lander's and when the overwhelming force of Indians came in sight strung out for a considerable distance, with their yells and queer decorations, all hope sank. Some women prayed, others screamed and cried, while others held their children to their bosoms in mute despair. Soon the Indians were around the place and...

In the University of Texas Library are graphic accounts of a little-known chapter in Texas history—the State's own refugee horror known as the "Runaway Scrape," a pell-mell flight of Texas settlers that began in mid-April, 1836, with the Alamo's fall, and didn't stop until Houston's retreating army—barely a day's march behind the refugees—turned and defeated Santa Anna at San Jacinto April 21st.

Most graphic account, Texas collection libraries agree, is in the memories of Mrs. Dilue Harris, member of a pioneering Texas family...

Narrative of numerous pioneer women who made a notable impact on the frontier settlements of Texas hill country, particularly of Bandera county. These glimpses and sketches help to underscore the character of those who carved out a life from hostile frontier and left a great Texas legacy.

Account describing the old "Sunny South" a story paper, published at Brownwood, Texas, by the Mickle brothers. Ed P. Mickle and Harvey A. Mickle. This little paper carried advertising matter for firms all over the United States. It was published twice-a-month, contained illustrations, and from the very start its circulation grew by leaps and bounds, despite the fact that it was printed in a mere village, some sixty miles from the nearest railroad.

A MISTAKE IN HISTORY

Santleben's Experience On The Border

First-hand account of a frontier freight hauler who for a time was contracted to carry the United States mail from San Antonio to Eagle Pass and that from Eagle Pass to Fort Clark. The length of the first route was one hundred and sixty-two miles, and he was required to make the round trip once every six days. The post offices were Castroville, New Fountain, D’Hanis, Sabinal, Uvalde and Eagle Pass. Account describes dangers nad tribulations that met him in the way of his business.

Due to the repeated and continued inroads of the Indians through 1837 and 1838, Col. John H. Moore, of Fayette, already distinguished alike for gallantry and patriotism, determined to chastise them. Calling for volunteers from the thinly settled country around him, he succeeded in raising a force of fifty-five whites, forty-two Lipan and twelve Toncahua Indians, for a total of one hundred and nine persons. Among this little troop of whites was Mr. Andrew Lockhart, of the Guadalupe, impelled by an agonizing desire to rescue his beautiful little daughter, Matilda, who had been captured with the four Putman children near his home. Together they made the hopeful assault. This account describes the sad event.

"It was at this moment, amid the screams, yells and war-whoops resounding through the valley, that Mr. Lockhart plunged forward in advance of his comrades, calling aloud: "Matilda! If you are here, run to me! Your father calls !" And though yet too dark to see, every word pierced the child's heart as she recognized her father's wailing voice, while she was lashed into a run with the retreating squaws…"

In 1873 several stage lines were in operation in Texas, among them being the line to El Paso from San Antonio. This line did a big business in hauling passengers and express matter, for at that time neither El Paso or San Antonio had railroad connection. F. C. Taylor was manager of the El Paso Mail Company's division, while F. H. Wright was superintendent of the Eastern Division, which operated daily between Marshall and Jefferson, Texas. The schedule for the El Paso division, as given in the Texas Almanac for 1873, is described in detail in this account.

Account of the life of Mrs. Alice Jones Townsend, of Alpine, Texas, in the heart of the Big Bend. She and her husband, Everett Ewing Townsend, had lived a long, useful, exciting, prosperous, and happy married life for forty-five years in this region. Here is her story.

In 1855 the Indians made a daring raid upon the settlers east of San Antonio and penetrated as far as the Cibolo along and in the western edge of Guadalupe County. This action precipitated an expedition to pursue and chastise the hostile Indians. The expedition took Calahan and his men to the border regions where hostilities broke out among Indians and Mexicans against them. Here is the story.

Brief account of well known San Antonio physician, Dr. H. Graham Watts, who was born in England in 1847, and came to the United States in May, 1882, settling for many years in San Antonio.