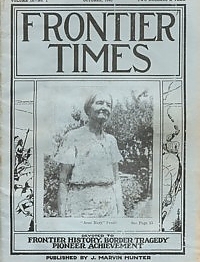 Some Early History Of Texas

By Colonel A. M. Hobby

From the first settlement of Texas, in 1691 to 1821, Texas and Coahuila constituted a province of Mexico under the domination of Spanish authority. After the achievement of Mexican independence, and by the Constitution of the Mexican United States, adopted in 1824, this territory constituted the State of the combined States decreed its installation, agreeably to the constitutive act of the Mexican Confederation, in 1824, but the State Constitution was not framed and sanctioned until 1827. Public officers were appointed provisionally, and derived their authority from the constituent Congress. This union, alike between the States and the Republic, proved to be au unhappy one. There was little in common between the inhabitants of Coahuila and the intrepid Anglo-American of Texas. So great was the national dissimilarity that even judicious compromises, early and graciously made, nor reciprocal forbearance generously practiced, would long have preserved the hollow truce between these divided States. Out of this tension, arose the Republic and then the great state of Texas - here is the story.

Account describing the archeological research that has been done in the Chisos Mountains area in the Big Bend region of the Rio Grande, and of the prehistoric peoples who dwelt in caves. These ancient people were master basket-weavers. Here is the story.

Mentions: the Hopi of Arizona * The Athapascan tribes in the interior of Alaska * The Eskimo about Bering Strait manufactured both woven mattings and wallets and coiled basketry of pliable grass. The Aleutian islanders are now among the most re-fined artisans in twined work. South of them the Tlingit and the Haida * Dr. Dora Neill Raymond, of Sweet Briar College. Sweet Briar, Virginia * Colonel Martin L. Crimmins * Marquis James *

Brief account of Mrs. Tom C. Head who faithfully executed duties for 20 years straight as a linotype operator in the printing establishment of The Commercial Recorder, a daily newspaper in San Antonio.

Account derived from Capt. Jack Hayes, the only witness of the scene, of an incident that occurred about 1855, when Fitzhugh Lee, then a young Lieutenant of cavalry in the United States army, afterwards distinguished as a General of cavalry in the Confederate army and still later as Governor of Virginia, fought hand to hand with a large, robust Indian warrior.

Was Red Man Or White Man To Blame?

The trials, troubles, and tribulations of the frontiersman who grimly faced the wilderness and the "red man" is an old story. The Texas frontier was harassed, pillaged, and plundered for half a century. Indian raids were almost as common as sand-storms. White men, women, and children were butchered and scalped. The primary object of the deprecators, however, was not to extinguish human life, but to steal the horses, mules, and cattle of the settlers. Hundreds of thousands of animals were driven away by the raiders to be sold or bartered to the traders who connived with them. The loss of his work stock and cattle was a serious matter for the isolated settler. His plight was not unlike that of a man adrift in a boat at sea without an oar. There is small wonder that the frontiers man developed an aversion, nay, loathing for the Indian whom he considered as the sole perpetrator of all of his troubles. The Indian, in time, came to bear the blame, often justly, no doubt, of most of the adversities of the frontier. The early settlers came to regard the Indian in the same manner as they did the coyote and other predatory animals. Only recently we have come to wonder if he was always as guilty and depraved as he was given credit for being.

During the fall months of 1927, I had occasion to work through the records in the archives of the Adjutant General's office at Austin. One afternoon I came upon a file of material, marked "unclassified." The assistant in charge told me that the records it contained had been found a short time before in a damp storeroom of the basement of the Capitol where they had lain unmolested since the completion and occupation of the building. When I learned that it was highly probable that these bundles of letters and documents had not been opened since the Civil War, I felt that occasional thrill which sometimes comes to one while engaged in the monotonous routine, digging post holes so to speak, of research work. Before long, I came to a packet of musty letters marked 1859. Among others was a letter addressed to the Governor from the commanding officer at Camp Cooper. The commandant stated that he was enclosing to the Governor a copy of a letter which had been taken from the body of a dead man found recently in the vicinity of Camp Cooper by a scouting party of Federal troops. It is about the revelations contained in this enclosed letter, when considered in connection with the stirring events of that year, that this article is to deal.

A Texas Town That Faded

Account of the little town of Carlsbad, Texas, which was located fifteen miles northwest of San Angelo. Today Carlsbad is a "ghost town" almost, but back in 1908 it gave promise of being one of the "coming" health resort towns of West Texas. In that year the Concho Land Co. of San Angelo acquired the Mason and Hughes ranch property of 60,000 acres along the North Concho river, and cut up this vast body of land into small tracts of from 80 to 320 acres, and placed it on the market. This company, of which T. J. Clegg was the head and E. C. Perry a manager, laid out a town which they called Hughes, on the North Concho river, and every purchaser of a farm tract was given a lot in the new town. Application was made for a post office to be called Hughes, but the post office department rejected the application because there was a Hughes Springs in Texas. Then it was suggested that the place be called Carlsbad. Here is the story.

HERE IS SOME EXCEEDINGLY VALUABLE AND RARE HISTORY AND GENEALOGY OF BLANCO COUNTY, TEXAS.

When Texas became a State there were several settlers in the territory now known as Blanco county. Homes slowly crept up the valleys of the Pedernales, the Blanco, Onion Creek, and other streams. By the middle fifties settlers were considering the creation of a new county, and on February 12, 1858, the new county was created out of part of Burnet, Comal, and Gillespie, and it was christened Blanco. Here is the story of that county, its formation, early development and notable citizens.

Killing Of James Winters By Indians

This account of the Killing Of James Winters By Indians by Dr. Thomas Speed is taken from an old copy of the San Antonio Herald, bearing date of November 2, 1861. It is an eye-witness description of the tragedy.

Moore's Victory On The Colorado, 1840

Account of the veteran soldier, Col. John H. Moore, of Fayette, who, after calling for volunteers to penetrate the country of the hostile Indians, on the upper waters of the Colorado, as another lesson to then that the whites were determined to either compel them to abstain from robbing, murdering and capturing their fellow citizens or exterminate them. A prompt response followed, and about the first of October the expedition left Austin, at once entering the wilderness. Here is the story of that confrontation.

Tragic account of a young man named Joe Wilton, 18 years of age, who on the 22d day of April, 1877, started from the ranch of Mr. Dan Patterson, who lived about one mile east from the present town of Devine, to go to a store on the Hondo kept by a man named Segenus, at the Eagle Pass crossing of the river. The boy never made it. Here are the details.

Account describinbg the riproaring, wild, reckless town of Dodge City, Kansas during that colorful period immediately following the Civil War, when the Texas cattle drives brought more than prosperity to the region.

In The Good Old Days

Quaint old story comparing the "virtues" of the modern world (of the 1930's) to Pioneer times.

Longhorn Helped To Build An Empire

Perhaps no other animal has had a more vital part in the building of a nation than the Texas Longhorn behind whose thundering hoofs hardy pioneers rode to civilize the West. Many are the tales of the Longhorn's fierce nature, his daring and stamina. But more fascinating than any of these is the story of how he paved the way for economic development of the West.

Mentions: noble Andalusian cattle * J. G. McCoy of Indiana, a cattle dealer * A man named Thompson is said to have driven the first Abilene-bound herd of cattle north from Texas, and on September 5, 1867