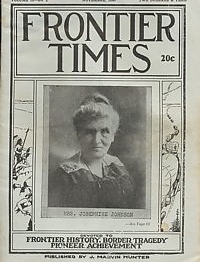 J. M. Adams Was In Many Indian Fights

Among those who came to Texas at an early day when the country was wild and full of hostile Indians, none made a better record as brave men and Indian lighters that the Adams brothers, Cood, William, Henry, Dave and James M. Adams, the subject of this sketch. James M. Adams settled in San Antonio in 1849. This is his story, and of the many Indian battles he participated in.

How Buffalo Bayou Was Named

Excellent account by Mr. Moore who was in Harris county, Houston when Buffalo Bayou was a smooth and placid stream and its waters were only disturbed by the swift turning paddles of the steamboats as they plowed their way to and fro between Galveston and Houston, laden with freight and passengers and for intermediate points. There was also the "chug, chug," of the tug boats that had barges in tow loaded with compress cotton down stream and empty barges coming up stream. He offers a vivid account of the wild days on the Bayou.

The author, who established a home on a farm in the lower end of Webber's prairie in 1839, describes early events around what became Webberville.

The Republics In Texas

Texans, for the most part, in thinking of the fascinating story of government in Texas, the transition from the monarchical rule of the kings and queens of old Spain and France to our existence under the glorious Stars and Stripes of America, overlook much of the glamour, the intrigue, the wild spirit of adventure which resulted in the organization of our first stable government. Here is the story of the various "Republics" that mark Texas' glorious history.

Travel Was Slow Forty Years Ago

Author recounts eventful but slow trip from Mason to Sonora, Texas in 1900. It is quite an interesting story and offers some excellent early history of Sonora, TX as well.

Back in the old days, of the frontier sports consisted mainly of horseracing, turkey shoots, gander-pullings, and sometimes footraces, but it remained for "camel-wrestling" to provide the unusual at some of the old army posts along the border in that period immediately preceding the war between the States. This thrilling and sometimes dangerous sport was introduced in Texas at old Camp Verde, the post where the camels were first placed when brought from Asia Minor in 1856. Camp Verde, twelve miles north of the present town of Bandera, and only two miles from the historic Bandera Pass, was selected as a permanent camp, where extensive experiments were undertaken by the government.

"Old timers tell of frightened negroes and wildeyed Mexicans who chanced to see a stray camel suddenly raise up in the moonlight as they were passing along some lonely stretch of road. And others, "scairt plumb to death" who came unawares upon a browsing camel even in broad daylight. There were tales, too, of the enlisted men's hostility to the queer beasts; of the seasick sensation they suffered to ride them, and the stubborn soldier loyalty they showed at all times for the old army mule. One of the most thrilling stories, related by one who had lived at Camp Verde, was of an ill-natured camel named "Major," that killed seven good army mules, one after the other, by jumping on them and crushing their backs.. No prompt means of dealing with him could be obtained, under the red tape system of army regulation, so the soldiers fitted the punishment to the crime. They found 'Major' one day near a…"

Account detailing the first fight between the Indians and the White Man in Crosby county Texas. The details of the battle are quoted from a photocopy of the report in the War Department, Washington, D. C., which was sent to the author by representative, George Mahon. It is dated Fort Richardson, Texas, October 15th, 1869.

The Story Of Whitfield Chalk

Account of the Chalk family line in Texas from the information of Mrs. Sarah Minna Chalk Hyman, who spent much time and effort in tracing the Chalk line back to its very first beginning. She made a trip to England in quest of authentic records preserved in the archives of London and elsewhere in the English islands. She had thoroughly gone into our own Colonial and Revolutionary records from earliest time of the period of 1776 and before. The account quotes directly from the records of Mrs. Hyman and contains old photo of Mr. And Mrs. Whitfield Chalk.

Brief account by Mrs H. F. Renken describing a great flood which swept down the Medina river in 1870, with a wall of water fully 20 feet high that came down almost without warning, and drowned several people.