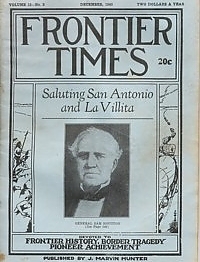 This issue highlights the history of San Antonio, Texas

The Story Of La Villita

San Antonio has always had Villita, which simply means "Little Town," in Spanish. It sits on high ground at the curve of the San Antonio River, above the floods, near springs that still flow. It is the most picturesque village of its kind outside Latin America. In its class are Santa Fe, San Augustine, and a few other towns of the Southwest that have been forgotten. Villita has rizen out of the earth. Its architecture is simple, not fancy Spanish. It stands as a symbol of a city culture, beautiful and austere. Through the centuries it has resisted rebellions, cholera epidemics, wars, hunger, misery. Over it have flown six proud flags—those of Spain, France, Mexico, the Republic of Texas, the Confederate States of America—and the United States of America. Here is the story. Includes photo of The Cos House in La Villita Where General Cos Surrendered to the Texans in 1835. Also photo of one of the original houses in La Villita, An Entrance to the Restored Village.

In Memory Of Sam E. Mcknight

Over on the hill of Mount Hope Cemetery in Carrizo Springs, Texas, is a plain grave. In that grave rests the earthly remains of a friend, a neighbor and a patriot—the late S. E. McKnight. He was universally recognized by young and old, rich and poor, as Dimmit county's most respected and honored citizen. Cast in a giant mold, both in mind as well as body, few men were more widely known and better loved in Texas, especially West Texas. If he stopped in any city, town or hamlet, usually in a few minutes he would be surrounded by admiring friends. He was always in the forefront of civic and forward moving worthwhile enterprises—one of which was the moving spirit in the establishment and development of the Dimmit county fair grounds. The shock of his lamented death was in sorrow on every heart, and on every tongue were such expressions as "I never heard him utter a word in anger"—"l never heard him gossip about or criticize anyone." If he ever spoke of anyone it was mentioning some good quality. He literally "fed the hungry and clothed the naked"—he was a living "good Samaritan" and here is his story.

The Alamo And Its History

In March of 1836 in the dreary little Spanish-Mexican city of San Antonio de Bexar, bugles blared out the dismal cry of el deguello, (death to all, no quarter, no mercy). It was on the order of Santa Anna, the Dictator of Mexico, who had marched his troops from the interior of Mexico to subdue the rebellious Texans. It was to attack the Alamo, which the Texans had occupied. And every fighting man of them was killed. Here is the story of the old mission from its beginnings, as well as an excellent chronological story of the fall of the Alamo.

The Missions Around San Antonio

Information taken from William Corner's book, "San Antonio de Bexar," published in 1890, about the Missions in and around San Antonio.

The Mavericks In San Antonio

San Antonio has one of the most colorful histories of any city in the world. History has been in the making there since the erection of the Alamo Church in de Espada, and colorful indeed is the history connected with the founding and existence of all of these missions which had for their purpose the conversion and civilizing of the Indians. The settling there of several hundred families from the Canary Islands in 1730, gave San Antonio de Bexar a start that destined it to some day be a great metropolis. Two settlements had sprung up: La Villita on the east side of the San Antonio river, and the Villa of San Fernando on the west side of that stream -- both villages now in the heart of the bustling metropolis, but at that time a mile or two apart. Here is a great article on the history of San Antonio and of a family that has played a large part in that history. Contains old photo of Samuel Augustus Maverick, as well as of Mary A. Maverick,

Some Impressions Of The Missions

The Missions in Texas are correlative in point of time with the determination of Spain to hold the region north of the Rio Grande, a part of Mexico, for the Spanish crown. The misty, filmy threads of the story run back into the shadowy past and become lost in a tangle of conjecture, but enough remains to let us read, with the aid of imagination, a fascinating tale of devotion, heartless cruelty, zeal and unbounded courage. It is the story, on the one hand, of the thrusting of the iron and utterly cruel arm of Spain into the haunts of comparatively un-warlike Indians, and on the other, of the Cross uplifted in the wilderness. In it we see the savage hates of Europe transferred to the New World in the south even as they were in the north in the early settlement of that region. Contains old photo of San Antonio in 1856 with La Villita in background.

Some Early Tragedies Of San Antonio

This excellent and lengthy story is the autobiography of an American who was a resident of San Antonio during the early years of the Nineteenth Century. Mr. Carlos Beltran's graphic accounts are given of battles that took place in and about this city and of the great historical tragedy that occurred there. While not an eyewitness to the butchery of Herrera and his men in 1813, he was in San Antonio at the time, was well acquainted with many of the culprits and heard from their lips the particulars of the execution. Carlos Beltran was a participant in the battles of the Alazan and the Medina and his escape from the vengeance of Arredondo seems miraculous and reads like a romance. His autobiography contains accounts of both these battles and of the cruelties inflicted upon the inhabitants of Bexar by Arredondo and also incidents of his subsequent life. He married a Mexican woman in San Antonio and moved to Chihuahua, where he reared a large family and in which city he died in 1876. He seems to have become largely Mexicanized, since his autobiography was written in Spanish. While consul at Chihuahua, the late W. W. Mills obtained the manuscript copy of this autobiography and through him it afterwards came to Mr. Hunter, who made a correct translation of it. This account contains the entire autobiography.

Ranch Life In Bandera County In 1878

Written for Frontier Times by Ms. Albert Maverick, Sr., in 1928

About 1878, Mr. Albert Maverick had little or nothing to do, so he spent most of his time riding around the country looking for a ranch. As a boy, Mr. Maverick had spent a good deal of time on Jose Policarpo Rodriquez ranch in Bandera county and finally ater much searching, Maverick decided on a ranch situated on the Medina River and Winan's Creek, lying between Bandera town and Medina City. This is the story of the Mavericks and their Bandera Ranch. Has old photo of Mr. And Mrs. Albert Maverick.

A Breach Of Privilege

Detailed and lengthy account of a case against Sam Houston apparently concerning a difficulty between him and William Stanbery, a representative from Ohio, but in reality it was an outbreak of resentment toward the Administration. Personal prejudices and political differences wove a clear-cut pattern throughout the proceedings—toward President Jackson, whose almost paternal attachment to Sam Houston was well known, and toward those other Tennesseans close to the President: Polk, Van Buren, and John H. Eaton, who had married the much talked about Peggy O'Neil. The indictment against Houston was for an alleged breach of privilege of the House of Representatives because of an altercation he had had with Mr. Stanbery for words credited to that gentleman and published in the National Intelligencer, March 31, 1832. Here is the story.