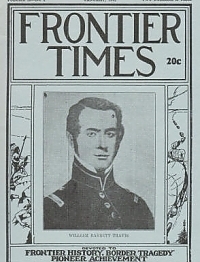 William B. Travis, Hero of the Alamo

All patriotic Texians revere the name of William Barrett Travis, who at the age of only twenty-seven, made the supreme sacrifice for the liberty of Texas. When he came to Texas in 1831 he found a Mexican province, dominated wholly by a tyrannical Mexican government, which seemed to throw every obstacle in the way of development of the country by the American colonists who had come in. Stephen F. Austin had settled several hundred families in Texas only five years before Travis came, and the treatment accorded those colonists by the Mexican government brought about the revolution that finally won independence from Mexico. This story records the role that Travis played in the great destiny-shaping events of those days.

Account of some of the life experiences of Mr. Henry Hartman, who offers details of early history in the Medina county, TX region and also of one of the most desperate encounters with Indians, one such as but few of our most noted and famous Indian fighters have passed through. Mr. Hartman came from the princi­pality of Schaumburg Lipe to New Fountain in 1860.

Brief obituary and bio. of the wife of frontier veteran Amasa Clark, long-time Bandera, TX resident. Mrs. Clark was born in Jackson coun­ty, Mississippi, January 7, 1859, and came to Texas in 1881, settling near Sabinal. She was married to Amasa Clark, a Mexican War veteran, on May 4, 1885. Her husband died in January, 1927, at the ripe age of 102.

Dr. James Crispin Nowlin was born in Caldwell county, Kentucky, April 16, 1817. In 1821 he went with his parents to the western district of Tennessee, but came to Texas from Mississippi, by way of Missouri and Kansas, in 1855. Dr. Nowlin was a slaveholder but not liking the situation in Kansas, came on to Texas and first settled in Gonzales county, and in 1856 moved to Kerr county and settled near the present town of Center Point. Here is his story.

Excellent advice from an experienced Genealogist on best methods of acquiring useful and meaningful data, especially geared toward frontier and pioneer research.

The Killing of Jesse James

The account of Jesse James death from the April 15, 1882 issue of the Runnels County Record, published in the now defunct town of Runnels, Texas.

Heroines of the Hills

By T. U. Taylor, Autsin, Texas

This is excellent early history and genealogy of Gillespie County, TX. Because it deals with the earlies events and origins of the region, it contains much valuable history of the hardy German families who settled the region.

Account of eccentric frontier soldier and enigmatic figure, Abel Morgan who was born in February, 1790 in Hopkins county, Kentucky. As a soldier, he followed Ben Milam at Bexar; cared for the wounds of Colonel Fannin at Goliad; listened to General Sam Houston deliver an impassioned speech to his men; and in later years visited with John C. Duval, the father of Texas literature," who not only made his getaway at Goliad but lived to write an account of it, (Early Times in Texas). Abel remembered them all. But what was his true legacy? What happened in Mexico while he was there fighting for the cause of Texas freedom? Who was Thomas Smith? Here is the story.

Mentions: * the famous Morgans of North Carolina * Doctor Stuart, a wise old Scot who had come over from Edinburgh to become a frontier doctor * Shiloh community * Honey Grove * Shiloh graveyard * Paducah, Kentucky * Thomas Smith * Concepcion * General Cos * William Scurlock * Doctors Barnard and Shackleford, * Clarence B. Wharton * the Lovings, the Millers, the Pratts, the Littlepages, and the Morgans

When Populism Was in Flower

Account of Populist party activities in and around Mason county, TX and their encounter with the Mason Herald newspaper in the 1890's.

The Bloody Days of Bastrop

Aside from many important battles, in which a large per cent of those men and others not named, participated, as at and around San Antonio in 1835, at San Jacinto in 1836 (in which fifty of them fought under Col. Burleson in Capt. Jesse Billingsley's company, and in which Lemuel Blakey was killed, and Capt. Billingsley, Logan Vandeveer, Washington Anderson, Calvin Page and Martin Walter were wounded), at Plum creek in 1840, in which a hundred of them and thirteen Toneahua Indians fought under Burleson, and other important contests, for fifteen years they were exposed to Indian forays and had numberless encounters and also fruitless pursuits after those ever active and cunning enemies. Some of these sanguinary incidents have been described; but, many have not and some, from the death of the participants and failing memories, never will be. But enough has been preserved to shed a halo of honor on those pioneers, by this writer many years ago styled—"The brave men of Bastrop."

In this chapter, availing myself somewhat of the recollections of Mr. John H. Jenkins, I will briefly sum­marize some of the incidents not heretofore given.”

Account of William Bouldin of West Oakland, California, whom as a brakeman on the Houston & Texas Central railway in the early 1880s helped haul the stone for the statehouse from the quarries at Burnet 75 miles away. Describing the capitol construction from the angle of the men who transmitted the materials, Bouldin said the blocks of granite were so large and the grade so difficult two engines were required to pull five loaded cars from Burnet to Austin. More than 15,000 carloads were brought to Austin and shunted to the building site on a specially constructed spur. The cornerstone weighed 16,000 pounds.

An Escape From the Alamo

This account embraces a report of the last scene in the Alamo that has ever been made known to the survivors of those who fell in that fortress.

Some Tragedies I Have Witnessed

From the author's vivid recollection, certain tragedies of which he was an eye-witness are recalled.

Indian Attack Upon the Gregg Family

This account is taken from a paper by Judge Rufus Y. King which was read before the Bell County Old Settlers Association, 1903. It concerns the bloody and brutal Indian attack upon the family of Judge John Gregg who came from Alabama to what was then Milam county, about six miles northeast of the town of Caldwell in the present county of Burleson. The event takes place early in the spring of 1841.

This article detailing the tragic yellow fever plague of Selma, Alabama is a report made to the Sanitary Commission of New Orleans by Dr. A. G. Mabry, in 1853, and was sent to Frontier Times by his son, Colonel W. S. Mabry of Selma, Alabama.

Murder of Mrs. Hunter and Daughter

Account of assault and murder that occurred in the year 1840, in the valley of Red River, about eight miles east or below the trading house or village of Old Warren and several miles from any other habitation.

Mentions: * Mr. William Lankford of Warren * the first settlements along Red river in the counties of Fannin and Grayson

News Items of Half a Century Ago

News items from old Texas newspapers, circa 1850's-1880's, are gleaned many notable incidents.