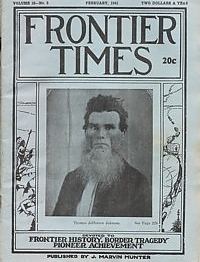 Captivity Of The Simpson Children

Among the residents of Austin in the days of its partial abandonment, from the spring of. 1842 to the final act of annexation in the winter of 1845-6, was an estimable widow named Simpson. During that period Austin was but an outpost, without troops and ever exposed to inroads from the Indians. Mrs. Simpson had a daughter named Emma, fourteen years of age, and a son named Thomas, aged twelve. On a summer afternoon in 1844, her two children went out a short distance to drive home the cows. Soon their mother heard them scream at the ravine, not over 400 yards west of the center of the town. Thus began the tragedy which is the subject of this account.

A Tenderfoot In A Sheep Camp

In the account, the author describes his experiences when unemployment led him to take up duties serving for a time in a sheep camp near Sonora, Texas.

Tales of buried gold, fabulous Spanish treasure, and pirate booty long hidden have always been common in Texas. Such stories make up most of the folk-lore of the Southwest. Adventurous and imaginative persons still search for lost mines and cached chests of gold and priceless jewels. The treasure hunter is usually a lone wolf, but now and then groups have been formed to work together to search old records and maps for data and to sift for clues the vast number of stories that have been handed down. By combining their time and their resources they hope to ferret out the hiding places of phantom riches. Fortunes have been spent in futile search; men have been killed when the quest seemed to be too near the end; lone seekers have perished in the fastnesses of arid mountains. They have gone on burros, by wagon train, on foot, in automobiles, and now some are going by airplane, but always their evanescent dreams have made them a bit mad. This account deals in particular with a report that in Austin there is a large treasure buried somewhere near the banks of Shoal creek.

This account (and the one that follows on the Old Johnson Institute), detail some excellent HAYS COUNTY TEXAS early history and genealogy

The first white settlers came to the county in 1846, the same year the town of Fredericksburg was founded. Others came in 1847 in large numbers. General Edward Burleson was representing the district in the State Senate and he introduced the bill to make the district a county. The bill was passed on March 1, 1848, creating Hays county.

In the year 1852, witnessed a great trek or migration from the older states into Texas. Texas had been a state some six years, and Texas fever had spread over all the Southern States, especially the Gulf States, and swarms of settlers crossed the Red River from Georgia, Tennessee, Kentucky and Arkansas. They generally took the northern route, came by Little Rock, crossing the Red River above Shreveport. Long before this immigration started, certain pioneer school teachers came as missionaries to Texas. By 1840, the churches had become alive to the necessity of education, but the state itself had made no provision for popular education. There had come into Texas in the latter part of the 1840's, Thomas Jefferson Johnson, a robust educator and a very heroic Christian. He, first taught in Huntsville, Texas, before Austin College was erected or had been established. He later taught in Webberville, Travis county. Overtures were made to him to establish an institution in the City of Austin, but like McKenzie, he determined to establish his school out in the country. He studied the situation, and of all the places he inspected, he finally decided on a spot in the northern part of Hays county, 17 miles southwest of Austin, in a beautiful flat valley between two prongs of Bear Creek, and here he established Johnson Institute that began operation in 1852. This is the story of Thomas Johnson and the institute. Includes 2 old photos of Institute.

Some Characters Around Old San Felipe

Account of early development and subsequent events that occurred in this historically vital area, the region of Texas' first settlers under Stephen F. Austin. The account is written from the eye of one of it's chief residents - Noah Smithwick.

What is the northern boundary of the Lone Star state? The answer to that contentious question—bandied between five nations off and on for four centuries—goes back to 1813, when Pichardo, Mexican cleric and historian appointed by the Spanish government to chart Mexico's boundary, traced the tortuous, muddy Red River. This account traces the various developments in the fixing of the state's northern boudary. Further Mentions: Charles W. Hackett * Dr. Charmion Shelby *

Texas Owes Much To George Childress

Little did those hardy patriots and Texas pioneers who assembled at Washington-on-the-Brazos during the eventful days of March, 1836, realize what the results of their deliberations would be, but they did lustily cheer and thrill to the words of the brilliant young Tennessean who had written that immortal document of Texas history—the declaration of independence from Mexico. That man—then only 32 years of age—was George Childress, an eminent lawyer, United States marshal for many years, and a man of great wealth. He was a close friend of Andrew Jackson. Here is his story.

Roy Bean, justice of the peace, operator of the famous Jersey Lily saloon at Langtry, and jurist par-excellence, about whom fiction writers and movie scenarist have woven an aura of romanticism, is just plain Roy Bean to one San Antonian who knew him. This San Antonioan is S. P. Peterson, a former justice of the peace at Sanderson, a railroad car inspector, and acquaintance of the famous jurist who held court sessions in his saloon at Langtry. According to Peterson, many of the Roy Bean anecdotes are just plain "bunk." Some of them, however, are true, he says. Here is his account of Judge Bean

The railroad man paid for his refreshment with his pay check, and just as Bean went to get the change, a "case" was brought before the court. Bean began the trial, which proved to he a long one. The railroadman waited patiently for some time, and then finally asked Bean for his change. The "judge" became enraged and cited the man for contempt of court fining hint the remainder of his check… Mentions: Sanderson * Vinegaroon * Charley Wilson * Del Rio * etc.

Texas News Items Of Long Ago

Mentions: Eight men went to the house of Tom Weaver, a halfwitted man who lived on Plum Creek, and deliberately shot him to death while he lay in bed between two children... * The Weatherford and Jacksboro stage was robbed last week… * A Mr. Knight rode into Cleburne a few days ago on a horned horse. The animal was in every respect a well formed two year-old colt except that it has two horns about… * The fencecutters have been very… * Van Alstyne * Frank Welch Higon * Z. Van Ward, aged seventy years, a resident of Bexar county * S. Brown, who killed old man Martin last summer * Jim Swofford, living near Springtown in Parker county… * . J. W. Mears of Menard * J. C. Jones * McCulloch county * Charles Lippincott * Mollie Johnson * Prosecuting Attorney Wallace of Medina county